Trump, Merkel spar over defense, Russia ahead of NATO summit 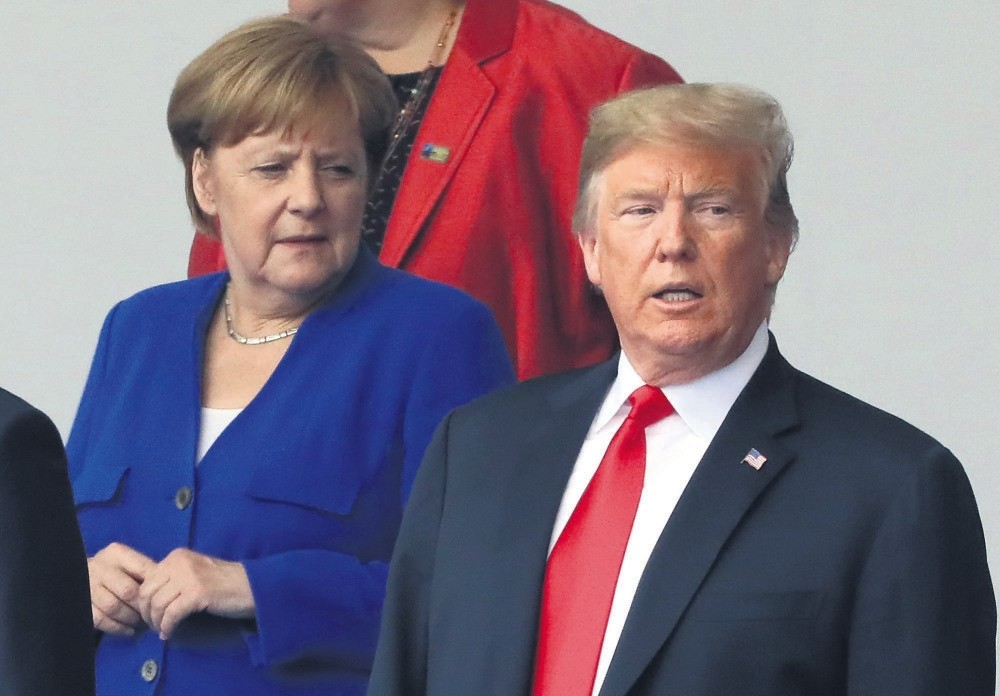 German Chancellor Angela Merkel and U.S. President Donald Trump exchanged barbs while getting off to a prickly start at the NATO summit, Brussels, July 11.
by Compiled from Wire Services
Jul 12, 2018 12:00 am

The NATO summit, which started yesterday, was supposed to show unity and resolve in the face of global threats. But the summit was overshadowed by the clashes between U.S. President Donald Trump and German Chancellor Angela Merkel. In a combative start on his NATO visit, President Donald Trump asserted yesterday that a pipeline project has made Germany "totally controlled" by and "captive to Russia" and blasted allies' defense spending, opening what was expected to be a fraught summit with a list of grievances involving American allies.

Trump, in a testy exchange with NATO Secretary-General Jens Stoltenberg, took issue with the U.S. protecting Germany as it strikes deals with Russia.

"I have to say, I think it's very sad when Germany makes a massive oil and gas deal with Russia where we're supposed to be guarding against Russia," Trump said at breakfast with Stoltenberg. "We're supposed to protect you against Russia but they're paying billions of dollars to Russia, and I think that's very inappropriate."

The planned pipeline would connect Russia to Germany across the Baltic Sea. Eastern European states and Ukraine fear the project by Russian gas giant Gazprom would cut them off from gas transit in the long run.

Merkel responded to Trump, however, that Germany makes its own decisions, recalling a time when this was not the case.

"I experienced, in person, that part of Germany was controlled by the Soviet Union. I am very happy that today we are united in freedom ... and that we can therefore also say that we conduct independent policies and can take independent decisions," Merkel said.

The barbs come ahead of a highly anticipated meeting between Trump and Russian President Vladimir Putin on Monday. Trump's visit to Europe, which also includes a trip to Britain ahead of his meeting with Putin in Helsinki, comes on the heels of growing tensions between Washington and the continent about trade issues, as well as Trump's withdrawal from the Iran nuclear deal.

Merkel also pushed back at Trump's argument that Germany is not meeting its NATO defense expenditure pledges, noting that, by 2024, Berlin would be spending 80 percent more on defense than in 2014. "We therefore consider that we are committed to the conclusions of [the NATO summit in] Wales to move towards 2 per cent on defense expenditure," Merkel added. Trump has been pushing NATO members to reach their agreed-to target of spending 2 percent of their gross domestic products on national defense by 2024 and has accused those who don't of freeloading off the U.S.

During the summit, the NATO leaders are due to sign off on several measures, including a high-readiness initiative enabling the alliance to mobilize 30 land battalions, 30 air squadrons and 30 combat vessels within 30 days. NATO has been ramping up its defense capabilities in recent years in response to perceived aggression from Russia, following the country's invasion of Ukraine's Crimean Peninsula in 2014, and its support for separatists in eastern Ukraine. The alliance is also launching a training mission in Iraq and extending its funding for Afghan security forces until 2024, as part of its efforts to fight terrorism. Also during the summit, Macedonia will receive an invitation to join NATO, after resolving a long-running dispute with neighboring Greece over the country's name.