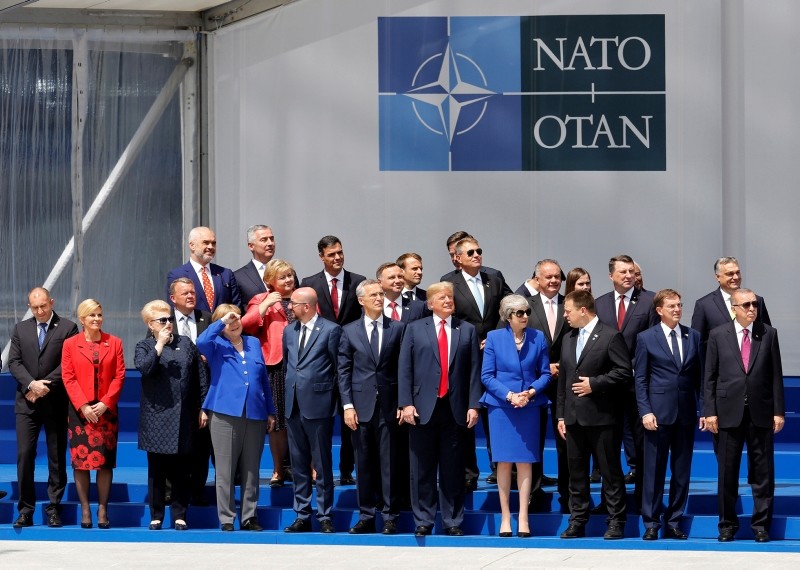 He refused to confirm earlier reports that he had threatened that the U.S. would pull out if NATO partners did not meet spending commitments.

"Yesterday I let them know that I was extremely unhappy with what was happening," Trump said at an impromptu press conference, adding, "Now we are very happy."

NATO is now "very powerful" and "much stronger than it was two days ago," Trump said, calling the alliance a "fine-tuned machine."

Everyone has agreed to "substantially" increase their defense commitments, Trump says, adding that, ultimately, the NATO defense target will be "quite a bit higher" than 2 percent of gross domestic product.

Trump repeated demands on the second day of the summit for countries to meet a spending target of two percent of GDP now, instead of by 2024, and to eventually double spending to four percent.

During a meeting of the allies with Ukraine and Georgia, "Trump took advantage of his speaking time to return to the issue of burden sharing," one of the diplomatic sources told French Press Agency (AFP) on condition of anonymity.

NATO chief Jens Stoltenberg "has therefore convened a meeting in Atlantic Council format, which involves all 29 countries in the alliance."

The source refused to comment on reports that Trump had threatened to pull out of NATO altogether.

Another diplomatic source said that a "special session on burden sharing is ongoing."

Trump also singled out Germany and its chancellor Angela Merkel for criticism, a day after saying Berlin had become a "captive of Russia" because of a gas pipeline deal and should be paying more for defense.

"Trump has pointed to several countries, especially Germany," the first source said, adding that there was "hard language, with repeated references to Germany" and even to the German chancellor, "calling her Angela."