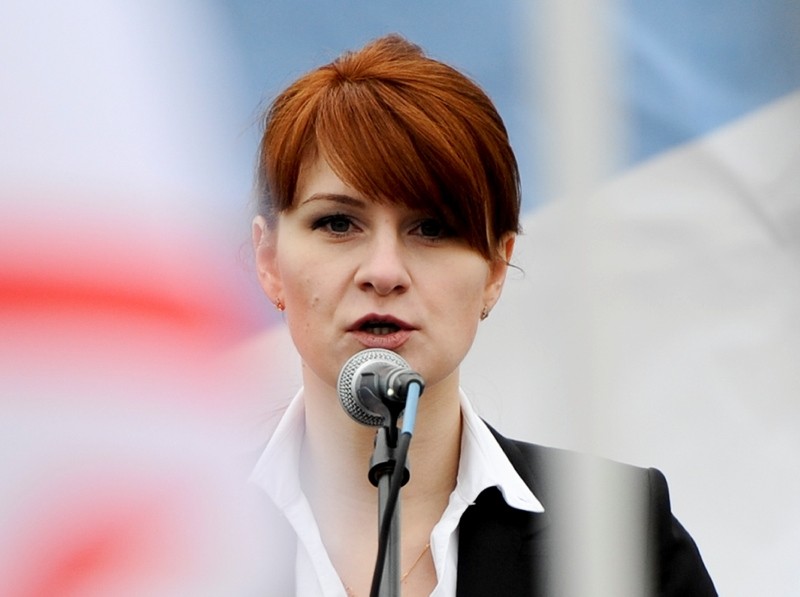 In this photo taken on Sunday, April 21, 2013, Maria Butina, leader of a pro-gun organization in Russia, speaks to a crowd during a rally in support of legalizing the possession of handguns in Moscow, Russia. (AP Photo)
by Compiled from Wire Services
Jul 18, 2018 12:00 am

A U.S. judge ordered accused Russian agent Maria Butina jailed on Wednesday pending trial after federal prosecutors warned that she has ties to Russian intelligence and was a flight risk.

During a hearing in U.S. District Court for the District of Columbia, prosecutors showed a photo of Butina meeting an alleged Russian intelligence operative at a Washington restaurant.

Russia's Foreign Ministry said on Wednesday the arrest in the United States of the 29-year-old woman accused of being a Russian agent was carried out to undermine the "positive results" of Monday's Russia-U.S. summit in Helsinki, RIA news agency reported.

Spokeswoman Maria Zakharova was cited as saying there were no grounds for the detention of Butina, who was arrested on Sunday, a day before presidents Vladimir Putin and Donald Trump met in Helsinki.

"This happened with the obvious task of minimizing the positive effect" of this week's Helsinki summit between Russian President Vladimir Putin and U.S. leader Donald Trump, Zakharova told reporters.

In Russia, Butina is known as a fervent gun rights activist with ties to Alexander Torshin, a senior official with Russia's central bank and a former lawmaker.

Butina's arrest was announced as Trump flew back from Helsinki to Washington, following an inaugural summit with Putin.

Trump has been accused of failing to stand up to the Russian leader over alleged meddling in the 2016 election in the United States, with many U.S. critics calling him a "traitor."

Butina, 29, was charged with conspiring to act as an agent of Russia "by developing relationships with US persons and infiltrating organizations having influence in American politics," the Justice Department said.

"Such unfounded claims against our compatriot simply look strange," Zakharova told reporters, adding that Butina had openly resided in the United States "for a long time" and did not hide from anyone.

"There is an impression the FBI is simply carrying out a clearly political order," she added, suggesting the timing of Butina's arrest was timed to coincide with the high-stakes summit.

Zakharova added that the Russian authorities were looking to secure access to her.

The Justice Department said Butina had broken U.S. law by not disclosing to authorities that she was acting on behalf of the Russian government.

It said Butina and the official sought to develop relationships with U.S. politicians to create "back channel" lines of communications that could be "used by the Russian Federation to penetrate the U.S. national decision-making apparatus."