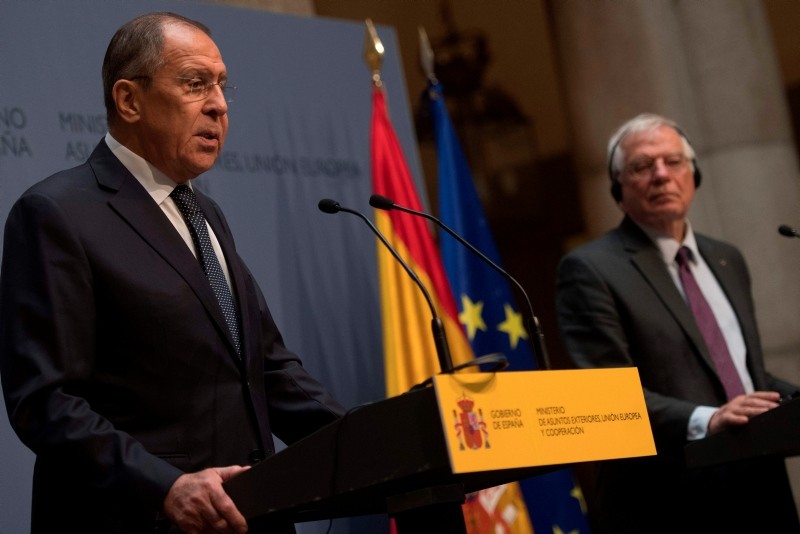 Spanish Foreign Minister Josep Borrell and his Russian counterpart Sergei Lavrov (L) hold a press conference at the Spanish foreign ministry in Madrid on November 6, 2018. (AFP Photo)
by Nov 06, 2018 12:00 am

The foreign ministers of Spain and Russia on Tuesday hit out at US sanctions policy against Iran and ultimatums they say are being imposed by Donald Trump's administration.

President Trump in May abandoned a 2015 multi-nation deal with Iran aimed at reining in its nuclear program.

The deal had been unanimously endorsed by a United Nations Security Council resolution, making it legally binding.

But in general the U.S. sanctions stipulate that to maintain access to the American market, countries and foreign companies must stop trading with Iran.

"Sanctions are absolutely illegitimate, they are being imposed in flagrant violation of the U.N. Security Council's decision," Russian Foreign Minister Sergei Lavrov told reporters in Madrid.

"And the forms in which these measures are being declared and implemented cannot cause anything but deep disappointment. It is not acceptable in our age to pursue a policy based on ultimatums and unilateral demands," Lavrov said.

Spanish Foreign Minister Josep Borrell concurred, saying he rejected "any kind of position that resembles an ultimatum from anyone and also from the United States.

"This notion of 'you're either with me or against me' is of another era," Borrell said.

Lavrov also once again rejected accusations of Russian interference in polls abroad, on the day of crucial U.S. midterm elections.

"All these accusations are false," he said and added "There is no intervention from Russia in today's elections."