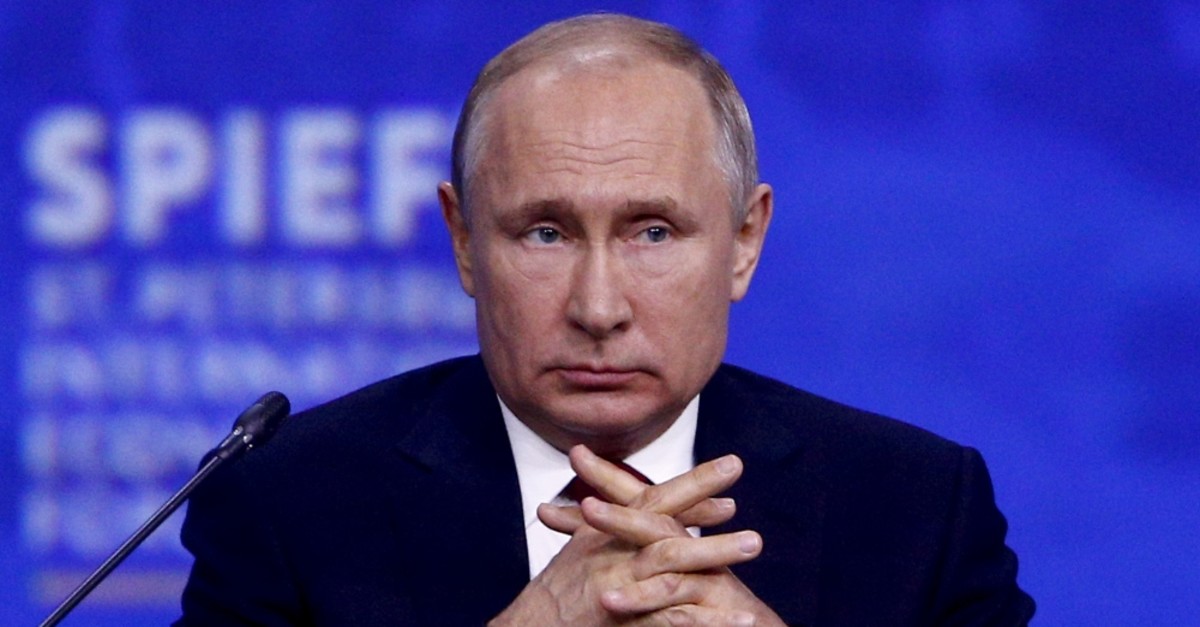 Even though Trump often says that he wants to get along with Moscow, Putin has pointed out that U.S.-Russia relations are not much better now than in previous years

President Vladimir Putin said relations between Moscow and Washington were getting worse and worse, noting in an interview published Thursday that the current U.S. administration had imposed dozens of sanctions on Russia.

Putin made his gloomy assessment ahead of the G20 summit in Japan later this month at which he might meet President Donald Trump.

U.S.-Russia ties remain strained by everything from Syria to Ukraine; however, an important issue that is off the table is the false allegation of the Trump campaign coordinating with the Russian government to win the 2016 election. While the story has mostly been dropped by the U.S. and international media, it still continues to have some effect on how Trump is perceived.

"They are going downhill; they are getting worse and worse," Putin told the Mir TV channel.

"The current administration has approved, in my opinion, several dozen decisions on sanctions against Russia in recent years." Trump told reporters on Wednesday that he would meet Putin at the G20 in Japan, but the Kremlin said a day earlier that the idea for the meeting was "hanging in the air" and that there were no discussions on specifics yet.

The American president also reiterated on Wednesday he hoped the United States would have "a great relationship with Russia," but pledged to deploy an additional 1,000 troops in Poland, a step sought by Warsaw to deter what they deem to be "potential aggression from Russia." Moscow perceives the move to be conducted in bad faith.

Trump said the Polish government would pay for the infrastructure to support the troops. The service members will be added to an existing force of about 4,500 U.S. troops that rotate in and out of Poland. He has long criticized NATO members for not paying their fair share into the alliance. The president said he probably would shift some U.S. service members from Germany, where tens of thousands have been based. Polish President Andrzej Duda differed over Russia's intentions toward its U.S. ally. At a time of ongoing worries about Russian military activity, Duda said he wanted Russia to be a friend of Poland even as he recounted his country's long history of conflict with Moscow.

Trump also hailed Poland's decision to buy more than 30 F-35 joint strike fighter jets from the U.S. In recognition of that purchase, a single F-35 made two passes over the White House on a sunny afternoon as both presidents watched from the lawn. Duda looked up and waved at the passing jet.

The Polish president also invoked Trump's "Make America Great Again" campaign slogan as he thanked the president for his interest in Poland.

"We would like Russia to be our friend, but unfortunately, Russia again is showing its very unkind, unpleasant imperial face," Duda said, noting its actions on Georgia in 2008 and Ukraine in 2014, including the annexation of Crimea, which had been ceded to Ukraine, then part of the Soviet Union, in 1954. The decision was taken to transfer the peninsula from the Russian Soviet Federative Socialist Republic to the Ukrainian SSR.

In another move certain to rankle Moscow, Trump said on Wednesday he was considering sanctions over Russia's Nord Stream 2 natural gas pipeline project and warned Germany against being dependent on Russia for energy. Germany's ruling party has pursued a semi-hostile policy with regard to Moscow in recent years; however, the opposition Alternative for Germany (AfD), which is most popular in the formerly communist eastern states, believes that relations with Russia must be mended and sanctions lifted.

Putin, who has spoken out in favor of China in its burgeoning trade war with the United States, said in the same interview that he hoped for smoother ties with Washington despite the current trajectory of their relationship. Beijing and Moscow have strategic reasons to stand together against the United States, since American sanctions are putting significant pressure on both their export-based economies. "We really hope that common sense will prevail in the end," said Putin. "That with all of our partners, including our American partners... we can reach some decisions in the framework of the forthcoming G20 that will be constructive and create the necessary stable conditions for economic cooperation."