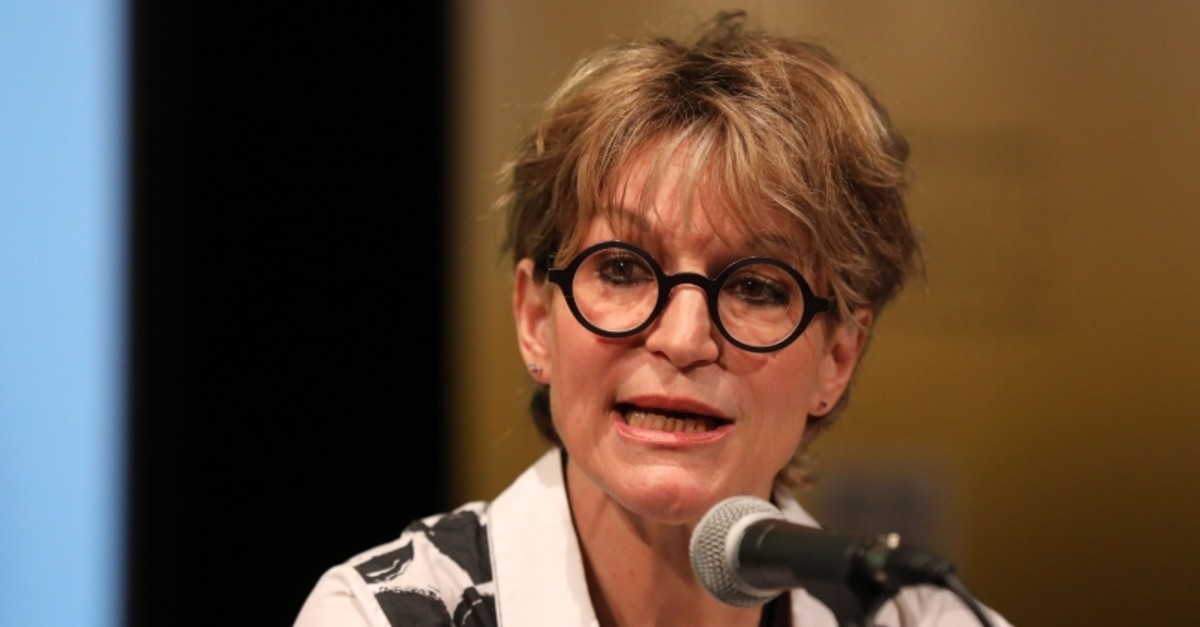 UN special rapporteur on extrajudicial, summary or arbitrary executions Agnes Callamard speaks on the killing of Saudi journalist Jamal Khashoggi during an Amnesty International event in London on July 9, 2019. (AFP Photo)
by Compiled from Wire Services Jul 10, 2019 10:43 am
Saudi Arabia is making the world complicit in a miscarriage of justice in the case of the murder of journalist Jamal Khashoggi, the U.N. special rapporteur on extrajudicial killings said Tuesday.

In an opinion piece published in The Washington Post, Agnes Callamard said Riyadh violated freedom of expression, threatened consular relations and interfered with the interests of the international community.

Khashoggi was killed and dismembered by a group of Saudi operatives shortly after he entered the country's consulate in Istanbul on Oct. 2 last year.

Eleven defendants are being prosecuted behind closed doors in the Kingdom. Of those, five face the death penalty.

"It is extremely troubling that, thus far, there has been little effective international response — legal, political or diplomatic," said Callamard.

She noted that the U.S. and other U.N. permanent members are observing Saudi Arabia's trial but have not agreed to disclose its details.

"Effectively, they are allowing themselves to be made complicit in what is, by all appearances, a miscarriage of justice," she said.

Initially denying and later downplaying the incident as an accidental killing in a fistfight, almost three weeks after the disappearance Riyadh finally admitted that Khashoggi was murdered in a premeditated action but denied any involvement of the royal family. The incident was blamed on lower-level officials.

Khashoggi's body has not been recovered, and the Kingdom has remained silent on its whereabouts.

Last month, the U.N. investigator released a report and said that Saudi Arabia was responsible for the killing of Khashoggi but fell short of placing the blame on Saudi Crown Prince Mohammed bin Salman.

Callamard also criticized the "warm" treatment of the crown prince by some world leaders including U.S. President Donald Trump during last month's G20 meeting in Japan. Meeting MBS at the last G20 meeting in Osaka, Trump said the 33-year-old leader was doing a "spectacular job."

"This return to business as usual signals to Saudi Arabia, and to other states, that gross violations of human rights are tolerated," said Callamard. "Without international action, it is clear that similar crimes will be repeated."

She called on the international community to step up its demands for an effective investigation into Khashoggi's murder and prosecute its masterminds.

"Justice for Khashoggi cannot depend on Saudi Arabia's flawed prosecution," she said, adding other states should claim universal jurisdiction and try those responsible.

"The FBI can and should investigate the case, as this crime affects U.S. interests. Agencies should declassify relevant U.S. intelligence materials to ensure the full truth is uncovered," she wrote.

Callamard said Khashoggi's killing is "emblematic of a global trend of violence against journalists, human rights defenders and political activists."

"Silence, inaction or, worse, tacit or explicit complicity will only cause further injustice and global instability. The time to act is now," she added.

Callamard does not speak for the U.N. but reports her findings to it. She has called on Secretary-General Antonio Guterres to initiate an international criminal investigation into the case. His office has said he does not have the authority to do this and a member state must initiate such action. Hatice Cengiz, Khashoggi's Turkish fiancee, appeared alongside Callamard at the London event and echoed her call for justice. "We ask all European countries and especially the U.K. to take this report more seriously," she said. "It's too dangerous to behave as if nothing has happened."