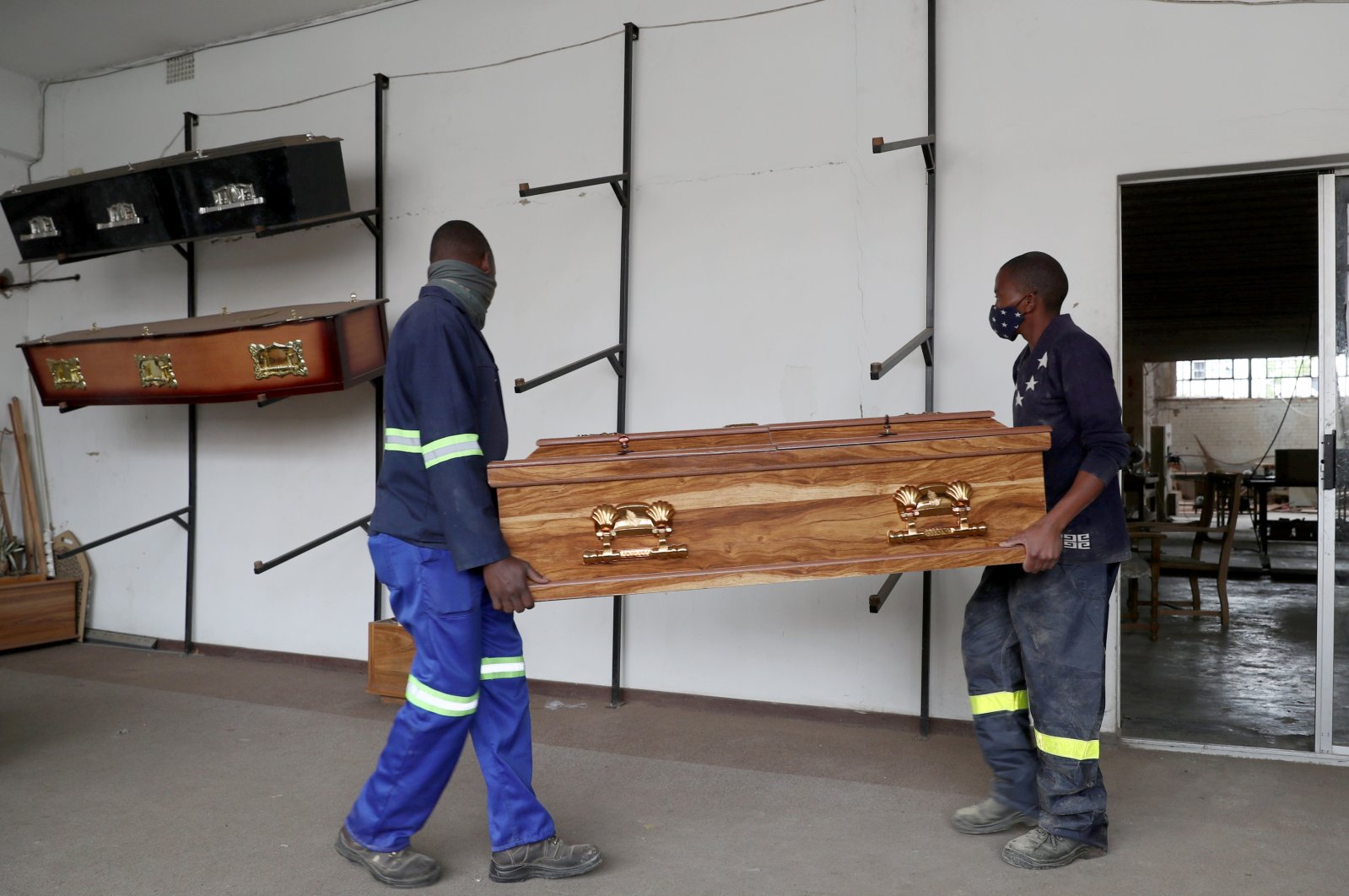 Workers carry a coffin to the display area at the Kingsize Coffins manufacturing plant, amid a nationwide coronavirus lockdown, in Benoni, South Africa, Jan. 25, 2021. (Reuters Photo)
by Anadolu Agency
Jan 31, 2021 11:37 am

Policymakers and health experts in Africa are voicing concern over coronavirus shortages, urging for a fair and equitable distribution of vaccines to ensure the continent is not left behind in the struggle against the COVID-19 pandemic.

South Africa President Cyril Ramaphosa, who also chairs the African Union, announced on Jan. 14 that the continental league had secured a provisional 270 million COVID-19 vaccine doses on behalf of its member states. This was done through an advance procurement commitment of up to $2 billion to the manufacturers.

Priority would be given to people at risk such as the elderly, persons with comorbidities, key front-line workers, social workers and those in security services.

However, with a population of about 1.3 billion facing inequitable distribution of the vaccine, concerns are mounting that Africa's target of immunizing the majority of the population to achieve herd immunity could be thrown off track.

"Getting sufficient vaccine supplies in Africa is somehow challenging because most of the companies manufacturing vaccines are based in rich countries. But efforts should be made to ensure Africa is not left behind in the global fight to combat COVID-19," Tharcisse Mpunga, Rwandan state minister for primary health care, told Anadolu Agency (AA).

"COVID-19 is affecting the whole world population. There is no reason for having vaccines distributed in Europe, the U.S., Canada, and not in Africa. The continent also needs its economy to recover, students to go back to school and above all to stop deaths."

According to John Nkengasong, the director of Africa Centres for Disease Control and Prevention (Africa CDC), the continent's goal is to ensure a fast rollout of the vaccination program.

But the biggest hurdle in Africa, according to him, is to finance the vaccines and the logistics of vaccinating at a large scale.

"We believe once we vaccinate 60 to 70% of the entire population, we will achieve herd immunity, so the distribution should be able to address that," said Mpunga.

The continent needs about 1.5 billion doses to be able to use a double shot regime, Nicaise Ndembi, senior science adviser for the Africa CDC, said in a recent online presentation.

Underlining that Africa has secured 36% of its needs to meet the set goal, Ndembi said 25% of the required total is to come from the global COVAX initiative and 11% from a separate African Union program.

Noting that the African Union officials are "working tirelessly to secure the vaccines," he expressed optimism that the target will be achieved.

Several African countries are part of 190 countries under the COVAX Facility, an international initiative bringing together governments and manufacturers to ensure equitable access to COVID-19 vaccines.

The COVAX Facility hopes to deliver at least 2 billion doses of vaccines by the end of the year, including 1.3 billion doses to 92 lower-income economies.

On Jan. 22, COVAX announced it had signed an advance purchase agreement with Pfizer for up to 40 million doses of the Pfizer/BioNTech vaccine candidate.

Most African countries have chosen the vaccine that does not need to be stored at ultra-cold temperatures like the Anglo-Swedish AstraZeneca shot.

The vaccines will be supplied through the Africa Medical Supplies Platform.

For example, Rwanda has ordered 1 million COVID-19 vaccine doses with the first batch expected to arrive in the country by February, according to officials. The government has so far chosen the two vaccines developed by U.S. pharmaceutical firms Pfizer and Moderna.

Uganda said it would receive its vaccines in April or May and has earmarked $164 million for the shots, including Moderna, Pfizer and AstraZeneca, expected to benefit 9 million people initially.

Elsewhere, Mozambique expects to acquire at least 70,000 doses of COVID-19 vaccines between February and March, according to the country's Health Ministry, while Mali expects to initially immunize 4.2 million people beginning at the end of March.

Morocco, with one of Africa's most advanced vaccination programs, Thursday launched its vaccination campaign, according to Moroccan authorities. It plans to get 66 million vaccine doses, covering about 80% of its 35 million population.

African countries in Sub-Saharan Africa are battling a second wave of coronavirus infections. The number of confirmed COVID-19 cases on the African continent reached 3.5 million as of Jan. 27, with a death toll at 86,898, according to the Africa CDC. But supply problems at AstraZeneca, which are causing political tensions across Europe, could undermine Africa's vaccination plans.

Mpunga thinks there is a need for sustained pressure to ensure the vaccine reaches all those in need.

The manufacturers are trying to maximize their production to vaccinate their populations, so African countries are left behind, he warned.

WHO Director-General Tedros Adhanom Ghebreyesus warned the world was on the brink of a "catastrophic moral failure" of equitable delivery of vaccines due to, what he described as, "vaccine nationalism."

Oxfam International reported in September 2020 that high-income countries had already reserved 51% of the doses of several leading vaccine candidates, even though those countries represent only 13% of the world's population.

Global Justice Now reported in November 2020 that more than 80% of Pfizer/BioNTech vaccine doses had already been bought by a handful of countries – all of them developed countries outside of Africa.

The Africa CDC warned that adequate vaccines are not likely to reach African countries until mid-2021.