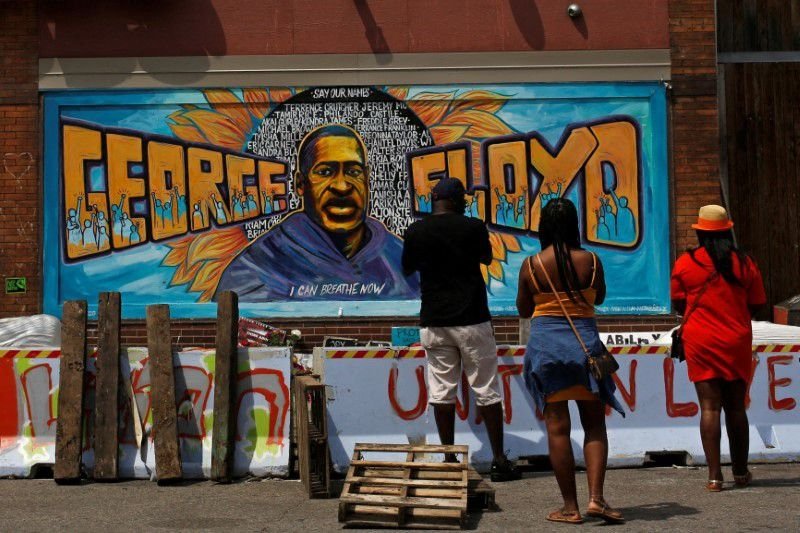 African Americans still do not trust the police in the United States as the senseless killing of George Floyd by a police officer two years ago in the state of Minnesota is still vivid in their minds.

On May 25, 2020, former Minneapolis Police Officer Derek Chauvin, who is white, placed his knee on the back of Floyd’s neck for nine excruciating minutes, during an arrest, until Floyd died. Chauvin is currently serving 22 years in prison for Floyd’s murder.

"The black community was very angry when (Floyd) died,” 21-year-old Ella "E” Thies of Minneapolis told Anadolu Agency (AA). "This was one of the last straws.”

"I can’t say anything good happened from his death, but it opened people’s eyes,” said Thies. "It brought about awareness of police brutality against black people. We have suffered years and years of oppression and violence by police officers.”

Thies said Floyd’s murder was a wake-up call to America about the disparities in police treatment between blacks and whites, emphasizing her firsthand knowledge of white privilege, as she was adopted by a white family.

"Growing up with a white mom in a white family, I had a certain amount of protection that other black people didn’t have,” said Thies. "But being black was a place where I did not receive that white privilege.”

"It’s really scary hearing about what (police) continue to do to black men, black people,” said Thies. "It’s really scary because when you go to school or to the store or anywhere, these are the people who are supposed to protect you.”

In the immediate aftermath of Floyd’s murder, the Minneapolis Police Department changed some of its policies, including banning chokeholds and neck restraints, which Chauvin used on Floyd.

The department also authorized officers to intervene if they see fellow officers engaging in unauthorized force.

"Violent (incidents) are still happening (to black people),” said 38-year-old M’Angelo Harris from Minneapolis. "The knees-on-the-body method is still being used and/or justified.”

As a black man in the U.S., Harris told AA that police intimidation and brutality are not new to the black community, especially black men.

"It's true. Fear for men of color (happens) during each interaction (with police),” said Harris. "Just when we start to feel semi-safe, a new tragedy occurs.”

Less than a year after Floyd’s murder, Minnesota suffered another high-profile killing of a black man at the hands of a white police officer in the Minneapolis suburb of Brooklyn Center.

Daunte Wright was shot and killed during a traffic stop on April 11, 2021, by then-Officer Kim Potter, who claimed she accidentally shot Wright believing she had used her taser instead of her handgun. Potter was convicted of manslaughter and sentenced to two years in prison.

"For every win follows a tragedy,” said Harris. "Not enough of you (police officers) are out here working visibly to mend our trust in the community.”

Police and communities of color

So what can be done to prevent another George Floyd or Daunte Wright tragedy?

"We can’t continue to have bad apples. We need a process to weed out those bad apples before they are placed in the community,” said 41-year-old Kendrick Thomas of Houston, Texas. "If a pilot of an airplane was a bad apple, think about how many people would die.”

Thomas, who is black, told AA he believes corrupt white police officers are the exception rather than the rule but stressed that unless the problem is addressed head-on by police departments nationwide, high-profile cases of police brutality against black people will continue.

"I still struggle to see changes in the community to prevent brothers from being the next George Floyd,” he said. "Police are still killing black people.”

Thomas said he applauds social justice protests and black activism but he believes actions speak louder than words, and the black community needs to do more.

Those who cheer on the Black Lives Matter bandwagon in times of tragedy have to follow through with real work, he urged.

"Everybody who was on the ‘rah rah’ George Floyd train when he passed (away) – I want to see those same people going into the community and making real change to make sure there isn’t another George Floyd,” said Thomas, adding that police departments need to re-prioritize how they deal with communities of color.

"We need empathy and relationship training for police who are serving communities they were not raised in,” he said. "It’s going to take us banding together to make the black community’s interests a priority in order to make the changes that are needed. That’s when we will start to see actual change.”

"A lot of black people are still being murdered by police,” said Thies. "I do hope and believe George Floyd’s death wasn’t in vain. It brought a lot of attention to police brutality and the inhumane treatment of black people by law enforcement. But we can only protest so much.”