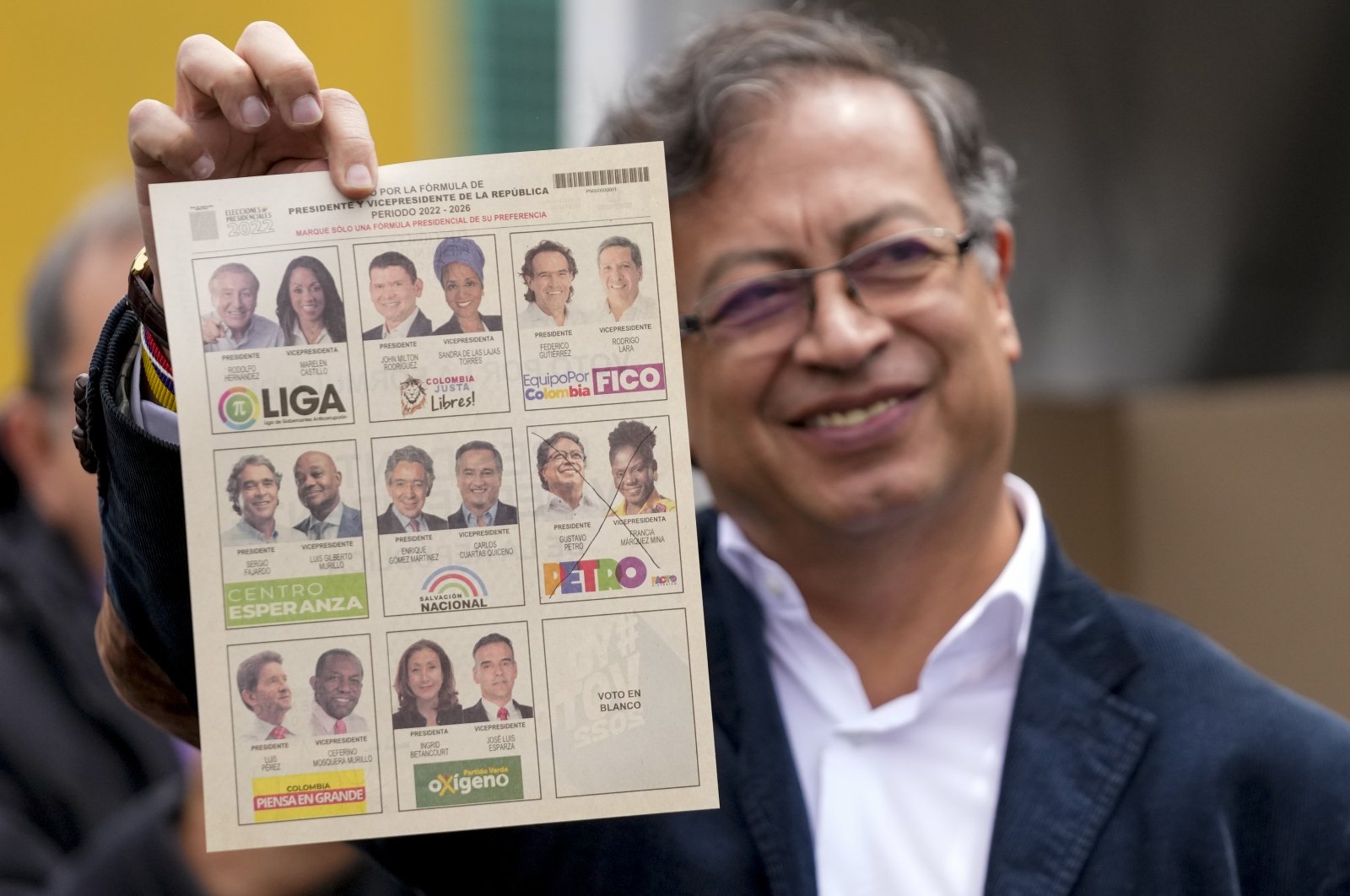 Gustavo Petro, a presidential candidate with the Historical Pact coalition, shows his ballot before voting during presidential elections in Bogota, Colombia, Sunday, May 29, 2022. (AP Photo)
by Associated Press May 29, 2022 5:35 pm
RECOMMENDED

Colombians headed to the polls on Sunday to vote for their next president, choosing between six candidates who each promise various degrees of change as the country grapples with rising inequality, inflation and violence.

The ballot includes former rebel Gustavo Petro, who has been leading in polls and could become Colombia's first leftist president. But polls also show him falling short of the 50% of votes needed to win in the first round and avoid a runoff against the second-place finisher.

Behind him are a populist real estate tycoon promising monetary rewards for tips on corrupt officials and a right-wing candidate who has tried to distance himself from the widely disliked conservative current president, Ivan Duque.

This is the second presidential election since the government signed a peace agreement with the Revolutionary Armed Forces of Colombia, known as FARC, but the divisive agreement was not a central campaign issue as matters like poverty and corruption garnered more attention.

It is Petro's third attempt to be the South American country's president. He was defeated in 2018 by Duque, who is not eligible for reelection.

His victory would usher in a new political era in a country that has always been governed by conservatives or moderates while marginalizing the left due to its perceived association with the nation’s armed conflict. He was once a rebel with the now-defunct M-19 movement and was granted amnesty after being jailed for his involvement with the group.

He has promised to make significant adjustments to the economy, including a tax reform, as well as changes to how Colombia fights drug cartels and other armed groups. His main rival for most of the campaign has been Federico Gutierrez, a former mayor of Medellin who is backed by most of Colombia’s traditional parties and ran on a pro-business, economic growth platform.

Gutierrez has promised to fight hunger with the extension of subsidies and public-private alliances so that food that otherwise goes to waste is destined for the poorest.

A Gallup poll conducted earlier this month showed that 75% of Colombians believe the country is heading in the wrong direction and only 27% approve of Duque. A poll last year by Gallup found 60% of those questioned were finding it hard to get by on their income.

The coronavirus pandemic set back the country’s anti-poverty efforts by at least a decade. Official figures showed that 39% of Colombia’s 51.6 million residents lived on less than $89 a month last year, which has a slight improvement from the 42.5% rate from 2020.

Meanwhile, the country’s inflation reached its highest level in two decades last month. Duque’s administration has justified April’s 9.2% rate for April by saying it is part of a global inflationary phenomenon, but the argument has not tamed discontent over increasing food prices.

In addition to economic challenges, Colombia’s next president will also have to face a complex security issue and corruption, which is a top concern of voters.

The Red Cross last year concluded Colombia reached its highest level of violence in the last five years. Although the peace agreement with the FARC has been implemented, the territories and drug-trafficking routes that it once controlled are in dispute between other armed groups such as the National Liberation Army, or ELN, a guerrilla group founded in the 1960s, FARC dissidents and the Gulf Clan cartel.

Duque’s successor will have to decide whether to resume peace talks with the ELN, which he suspended in 2019 after an attack killed more than 20 people.

Aware of voters’ corruption worries, real estate tycoon Rodolfo Hernandez has placed the issue at the center of his campaign. Hernandez, the former mayor of Bucaramanga, surprisingly rose in the final stretch of the campaign after promising to “clean” the country of corruption and to donate his salary.

The other candidates on the ballot are Sergio Fajardo, former mayor of Medellin and candidate for the center coalition; Christian leader John Milton Rodríguez, and the conservative Enrique Gómez.