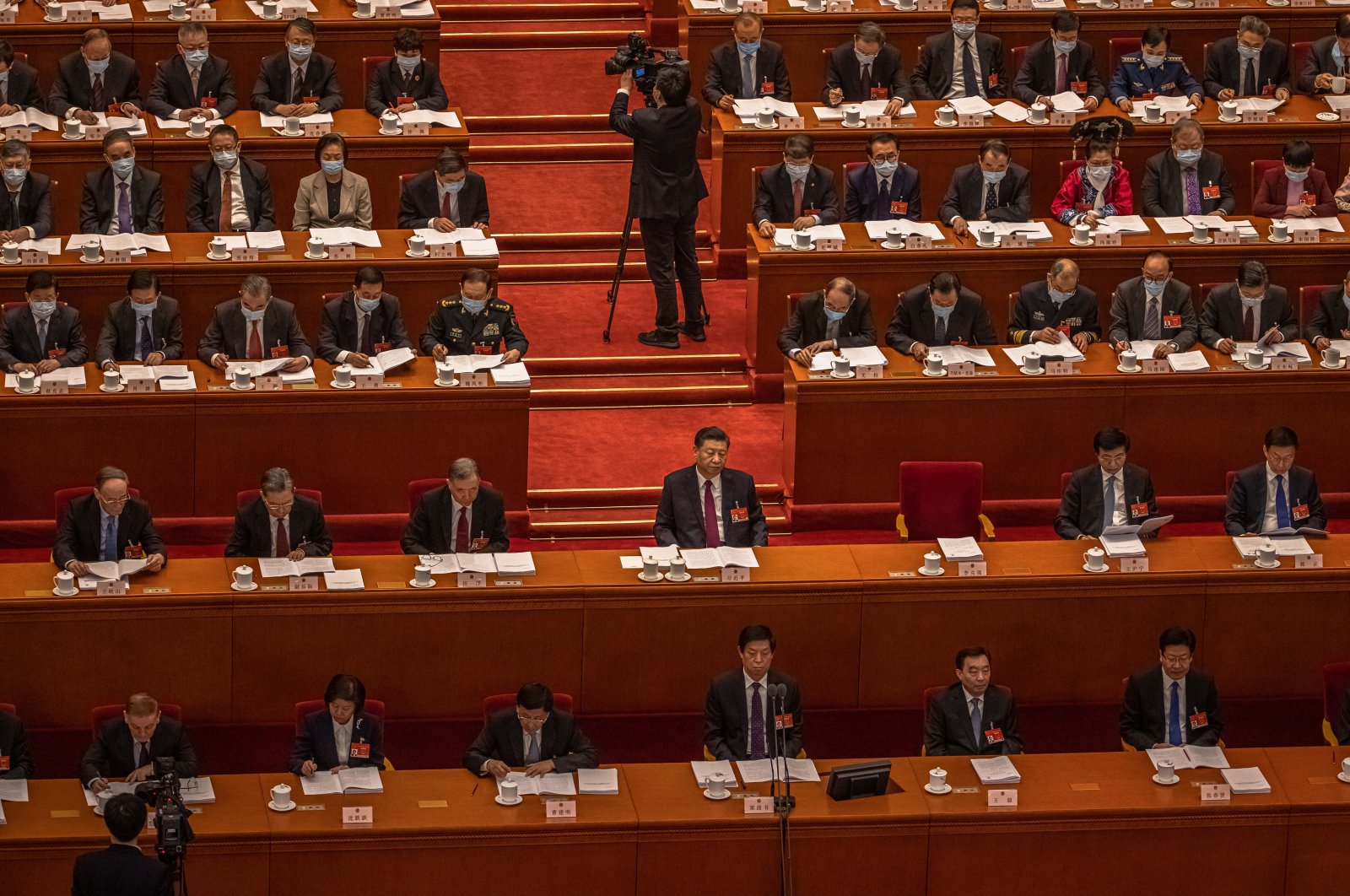 Chinese President Xi Jinping (C) with other delegates listen to a speech by Premier Li Keqiang (not pictured) during the opening session of the National People’s Congress (NPC) at the Great Hall of the People, in Beijing, China, March 5, 2021.(EPA-EFE Photo)
by Agencies
Mar 05, 2021 11:42 am

Beijing confirmed plans to overhaul Hong Kong's electoral system at China's annual meeting of parliament that started Friday. The changes will mark the most significant restructuring of the former British colony's political and administrative systems since it returned to Chinese rule in 1997 and cement Beijing's control over how it is run.

Xia Baolong, Beijing's top official in charge of Hong Kong affairs, said the reforms were necessary to ensure that only "patriots" rule the semi-autonomous city.

The National People's Congress (NPC) meeting focuses on domestic issues but is overshadowed by geopolitics as President Xi Jinping’s government pursues more assertive trade and strategic policies and faces criticism over its treatment of Hong Kong and ethnic minorities, The Associated Press (AP) reported. The ruling party has doubled down on crushing dissent as Xi tries to cement his image as a history-making leader reclaiming China’s rightful place as a global power. At last year’s legislative session the party imposed a national security law on Hong Kong following protests. Dozens of activists have been arrested under the law.

Hong Kong's Legislative Council scrutinizes bills, passes laws, approves spending and has the power to endorse the appointment and removal of judges of the Court of Final Appeal and the chief judge of the High Court. It is currently made up of 70 seats, 35 of which are directly elected through five geographical constituencies.

The other 35 are indirectly elected through functional constituencies – professional or special interest groups – that give a voice to sectors of the economy largely stacked with pro-Beijing figures. Few details were initially available, but Hong Kong media, citing unnamed sources, said Beijing's proposed changes include increasing the size of the city's legislature from 70 seats to 90, with the additional seats comprising pro-Beijing members.

The shake-up also aims to raise the number of members in the city's election committee, which selects Hong Kong's leader, from 1,200 to 1,500, according to local media. The additional members would comprise members of China's People's Political Consultative Conference (CPPCC) and other patriotic groups, reports said.

Senior Chinese lawmaker Wang Chen said China will change the size, composition and formation method of the electoral committee and give it powers to pick many of the city's legislators as well. The changes are also expected to see district councillors, Hong Kong's only fully democratic institution, scrapped from the election committee and legislature, according to Reuters. In the 2019 district council elections, pro-democracy candidates won almost 90% of the 452 seats, dealing a humiliating blow to the establishment.

The proposed changes will pave the way for Beijing to consolidate its authoritarian control over Hong Kong, coming on the heels of a national security law that critics say is being used to crush dissent in the global financial hub. China's parliament spokesperson, Zhang Yesui, said the electoral reforms were necessary to "move with the times," adding that parliament has the power and responsibility to make the decision to "improve" the political system.

The reforms would deal the biggest blow yet to Hong Kong's beleaguered pro-democracy camp, which is already reeling from a crackdown that has seen 47 members charged with subversion, some lawmakers disqualified and scores flee the city for fear of being detained under the contentious security legislation. The shake-up would also stamp out any moves toward universal suffrage, which Beijing promised as an ultimate goal for the city in its mini-constitution, the Basic Law.