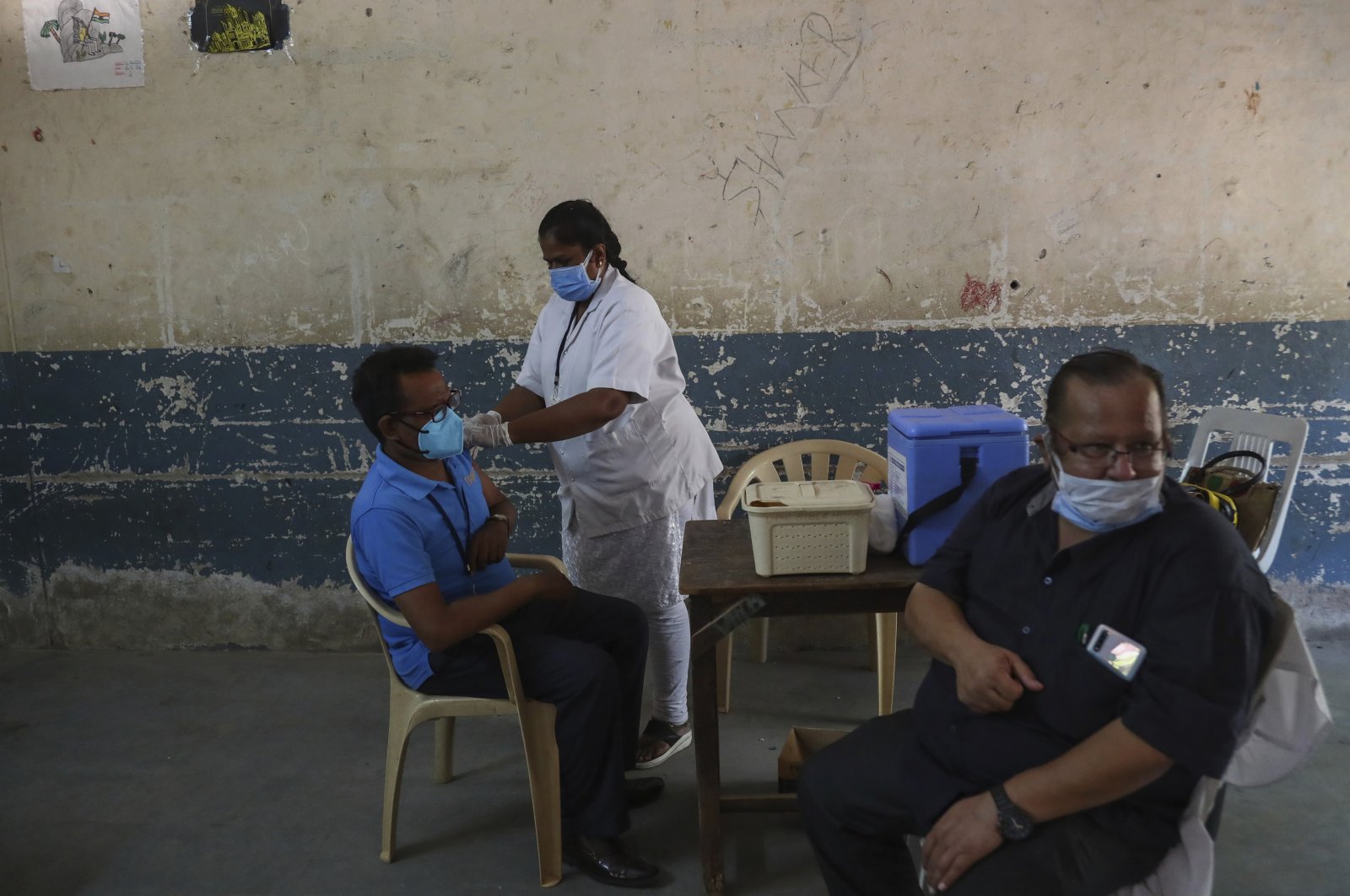 A health worker administers Covishield, the Serum Institute of India's version of the AstraZeneca vaccine, to a man during a special vaccination drive held on the premises of a government school in Hyderabad, India, May 30, 2021. (AP Photo)
by French Press Agency - AFP
May 30, 2021 11:56 am

The first year of the coronavirus pandemic has pushed 230 million Indians into poverty. "We are hungry," say millions of families cornered by the economic impact of the outbreak

Rasheeda Jaleel lives in fear that she may not be able to feed her seven children as millions of Indian families are forced into poverty by devastating measures to combat a new coronavirus wave.

The 40-year-old, her husband Abdul Jaleel, 65, and the children already survive on just one meal a day.

"When we are hungry and thirsty, I feel very helpless and worry, 'How am I going to survive like this?'" Jaleel told Agence France-Presse (AFP) as she made roti – flatbread – for the solitary meal in their tiny New Delhi flat.

"We manage with whatever my husband is able to earn. If it's not enough, I stay hungry so I can feed my children."

In eight weeks, the coronavirus has killed 160,000 people in India, overwhelmed hospitals and shut many businesses. Experts warn that another crisis is looming, with rising levels of hunger among poor Indians already reeling from a first lockdown last year.

"It's a double crisis that the poor in the country are facing – there is the health crisis and there is also an income economic crisis," Anjali Bhardwaj from the Right to Food Campaign told AFP.

"We have had a huge health crisis unfolding ... and many have had to spend their life savings on trying to provide medical aid to their families."

About 230 million Indians fell into poverty – defined as living on less than 375 rupees ($5) per day – in the first year of the pandemic, according to a study by Bangalore's Azim Premji University.

'We have no choice'

More than 7.3 million jobs were lost in April alone, according to the Centre for Monitoring the Indian Economy. That means more pain in a country where 90% of the workforce is in the informal sector with no social safety net, and where millions do not qualify for emergency government rations.

"A lot of people went into poverty last year, they went into debt, and ... they had to cut back on food consumption," associate professor Amit Basole, one of the university study's authors, told AFP.

"So the second wave is coming on top of a very precarious, stressed situation."

Abdul Jaleel turned to peddling a rickshaw to feed his family after his construction work dried up during a fresh Delhi lockdown.

"And on some days, I don't make anything," he said.

"As parents, we will have to make ends meet somehow, whether we beg, borrow or steal. We have no choice."

In last year's lockdown, about 100 million people lost their jobs in India. After restrictions were lifted, around 15% failed to find employment by the end of 2020 – including 47% of female workers, the Azim Premji University study found.

Many who returned to work had to settle for lower pay, leaving them more vulnerable when the second wave hit.

Meanwhile, an estimated 100 million Indians, including the Jaleels, have no ration cards to give them access to government food aid, Bhardwaj said.

The Right to Food organization has been campaigning for emergency food supplies to be given to the needy, even if they do not have ration cards.

With the pandemic unraveling years of poverty reduction, experts warn that many could remain trapped in a vicious cycle of hardship even after lockdowns are lifted.

Bhupinder Singh, a micro-financier who has distributed food to the needy during the two lockdowns, has seen desperation rise among hundreds of unemployed men sleeping rough beside a busy Delhi highway.

When he arrives with food packets, a cry of excitement goes up and men run to the back of his car and form a long queue.

"People are stuck here out of helplessness," Sunil Thakur, 50, who lost his job as a hotel waiter during the lockdown, told AFP.