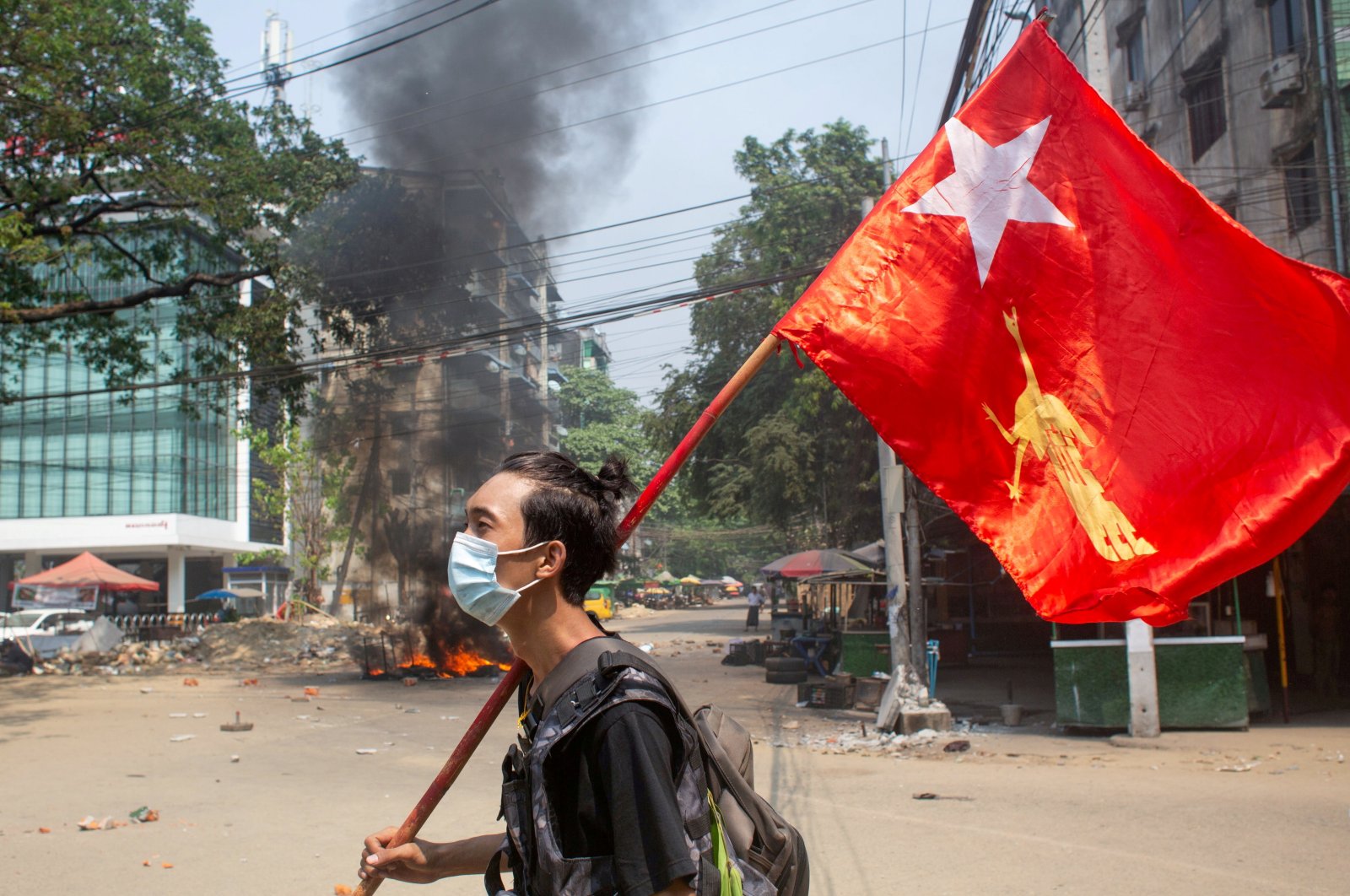 A man holds a National League for Democracy (NLD) flag during a protest against the military coup, in Yangon, Myanmar, March 27, 2021. (Reuters Photo)
by Reuters May 15, 2021 2:54 pm
RECOMMENDED

Myanmar's northwestern town of Mindat saw fighting between local militia and the army on Saturday, residents said, as the army sought to end a rebellion that sprung up to oppose the junta which seized power in the Southeast Asian country in February.

The fighting in Mindat, Chin state, underlines the growing chaos in Myanmar as the junta struggles to impose its authority in the face of daily protests, strikes and sabotage attacks after overthrowing elected leader Aung San Suu Kyi.

"We are running for our lives," one resident told Reuters from Mindat, a hill town just over 100 kilometers (60 miles) from the border with India.

"There are around 20,000 people trapped in town, most of them are kids, old people," the resident added. "My friend's three nieces were hit by shrapnel. They are not even teens.”

The junta imposed martial law in Mindat on Thursday and then stepped up attacks on what it called "armed terrorists". A spokesperson did not answer calls requesting comment on the fighting on Saturday.

Fighters of the Chinland Defence Force retreated as military reinforcements advanced with artillery bombardments and helicopter attacks, a member of a local administration set up by the junta's opponents told Reuters by phone.

There had been civilian casualties, he said, but could not confirm the number.

Five civilians had been killed in Mindat in the past two days, said Doctor Sasa, minister of international cooperation in a shadow National Unity Government set up to rival the junta.

Myanmar already had some two dozen ethnic armed groups, who have waged war for decades against an army dominated by the Bamar majority. The Chinland Defence Force was set up in response to the coup.

Reuters was unable to reach the group for comment on Saturday.

At least 788 people have been killed by the junta's security forces in crackdowns on protests against its rule, according to an advocacy group.

The military, which disputes that number, imposes tight restrictions on media, information and the internet. Reuters cannot independently verify arrests and casualty numbers.

Junta spokesperson Zaw Min Tun told a news conference that 63 people had been killed recently in what he described as various "terrorist attacks" by the administration's opponents, appealing to people to inform on the attackers.

Anti-junta protests were held in the main city of Myanmar and many other towns on Saturday.

A poet who had criticized military rule had been soaked in gasoline and burned to death in the central town of Monywa on Friday, residents said. Sein Win was the third poet to be killed in the town, a stronghold of opposition to the junta.

The army took power alleging fraud in an election won by Suu Kyi's party in November. Its claims of irregularities were rejected by the electoral commission.