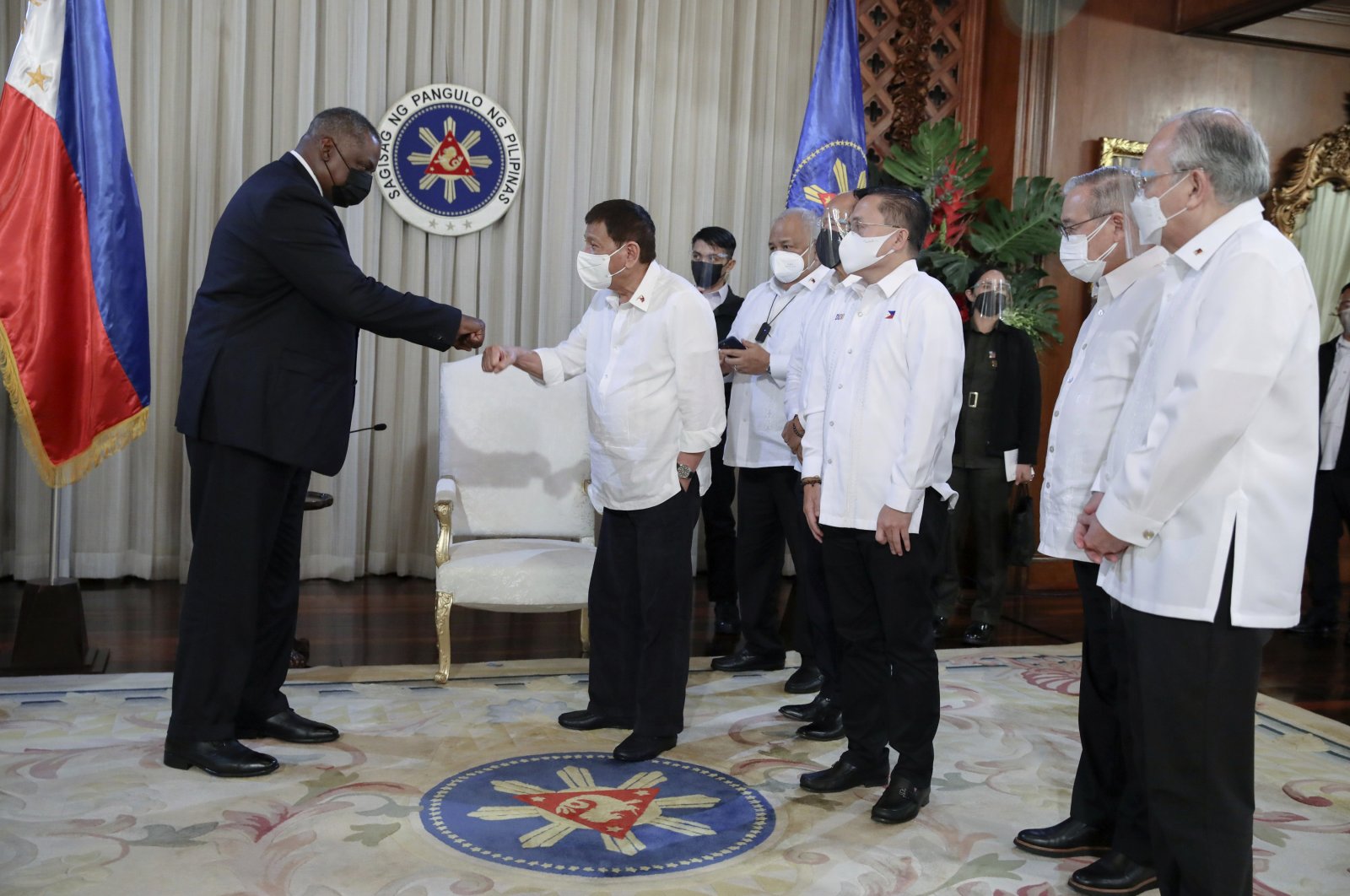 In this photo provided by the Malacanang Presidential Photographers Division, U.S. Secretary of Defense Lloyd Austin (L) does a fist bump with Philippine President Rodrigo Duterte during a courtesy call on the president at the Malacanang Palace in Manila, Philippines, July 29, 2021. (AP Photo)
by REUTERS
Jul 30, 2021 8:29 am

President Rodrigo Duterte has restored a crucial pact governing the presence of U.S. troops in the Philippines, the two countries' defense ministers said on Friday, reversing a decision that had caused increasing concern in Washington and Manila.

The Visiting Forces Agreement (VFA) provides rules for the rotation of thousands of U.S. troops in and out of the Philippines for war drills and exercises. It has assumed additional importance as the United States and its allies contend with an increasingly assertive China.

Philippine Defense Secretary Delfin Lorenzana said he was unsure why Duterte had reversed himself but made the decision after meeting U.S. Defense Secretary Lloyd Austin in Manila on Thursday. Duterte's decision won't change much on the ground as the pact had not been terminated but it provides stability for both countries.

"This provides certainty for us going forward, we can do long-range planning and do different types of exercises," Austin said during a news conference with his Philippine counterpart.

The Philippines is a U.S. treaty ally, and several military agreements are dependent on the VFA. Duterte vowed to terminate the pact after the United States denied a visa to a Philippine senator who is an ally of the president. But he had repeatedly pushed back the expiration date, the last time last month, maintaining it until the end of the year.

For the United States, having the ability to rotate in troops is important not only for the defense of the Philippines, but strategically when it comes to countering China's assertive behavior in the region.

"(Duterte's decision) opens up significant possibilities for strengthening the alliance that were otherwise closed," said Greg Poling, with the Center for Strategic and International Studies. There are long-standing tensions between the Philippines and China over disputed waters in the South China Sea.

The United States this month repeated a warning to China that an attack on Philippine forces in the South China Sea would trigger a 1951 U.S.-Philippines mutual defense treaty. There are, however, still questions about Duterte's unpredictability.

"Some of the celebration is premature ... (the VFA) will continue to be under threat so long as Duterte remains president," said Aaron Connelly, with the International Institute for Strategic Studies. Philippine presidential elections are set for 2022 and while Duterte is barred by the constitution from seeking re-election, his party has been encouraging him to run again for office, as vice president.