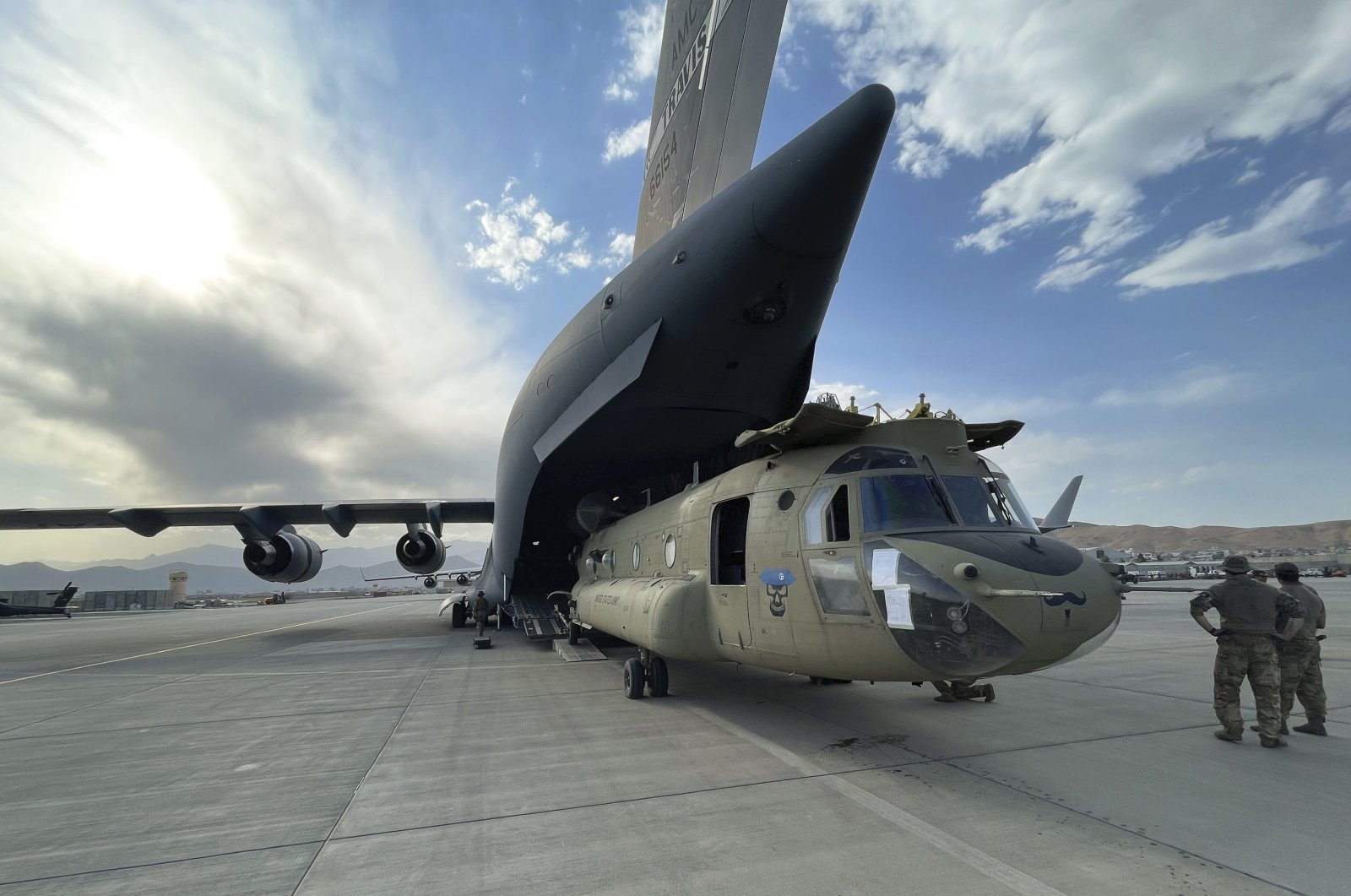 In this image provided by the Department of Defense, a CH-47 Chinook from the 82nd Combat Aviation Brigade, 82nd Airborne Division is loaded onto a U.S. Air Force C-17 Globemaster III at Hamid Karzai International Airport in Kabul, Afghanistan, Saturday, Aug, 28, 2021. (Department of Defense via AP)
by Agencies
Aug 30, 2021 10:50 pm

The United Nations Security Council adopted a resolution Monday requiring the Taliban to honor their commitment to let people freely leave Afghanistan, though the measure did not feature a "safe zone" mentioned by French President Emmanuel Macron. The council also urged the "rapid and secure" reopening of Kabul Hamid Karzai International Airport serving Afghanistan's capital after U.S. forces complete their withdrawal from the war-torn country.

The resolution – drafted by the United States, Britain and France – was passed with 13 votes in favor and no objections. China and Russia abstained.

The resolution says the council expects the Taliban to allow a "safe, secure, and orderly departure from Afghanistan of Afghans and all foreign nationals."

It refers to an Aug. 27 statement by the Taliban in which the group said Afghans would be able to travel abroad, and leave Afghanistan any time they want to, including by any border crossing, both air and ground.

The Security Council "expects that the Taliban will adhere to these and all other commitments," the resolution says.

Macron had raised hopes of more concrete proposals in comments published in the weekly Journal du Dimanche over the weekend.

He said Paris and London would present a draft resolution which "aims to define, under U.N. control, a 'safe zone' in Kabul, that will allow humanitarian operations to continue," Macron said.

"I am very hopeful that it will be successful. I don't see who could be against making humanitarian projects secure," he said.

But the U.N. resolution on the table is far less ambitious. It is not clear whether another resolution proposing a "safe zone" will be circulated later on.

"This resolution is not an operational aspect. It's much more on principles, key political messages and warnings," a U.N. diplomat told reporters.

Experts said the text was watered down to ensure China and Russia would not use their vetoes to block it, including softening some of the language related to the Taliban.

"This is a pretty thin text," said Richard Gowan, U.N. expert at the International Crisis Group.

"Macron was guilty of overselling the idea of a safe zone at Kabul airport this weekend, or at least not communicating very clearly," he told Agence France-Presse (AFP).

"The resolution does at least send a political signal to the Taliban about the need to keep the airport open and help the U.N. deliver aid."

The text calls for the Taliban to allow for "full, safe, and unhindered access" for the United Nations and other agencies to provide humanitarian assistance.

The U.N. has said it is critically important to keep the airport open to allow aid to flow into Afghanistan.

The council also "reaffirms the importance" of upholding human rights, including of children, women and minorities and encourages all parties to seek an inclusive, negotiated political settlement with the "full, equal and meaningful representation of women."

The text also calls for Afghanistan to "not be used to threaten or attack any country or to shelter or train terrorists, or to plan or to finance terrorist acts."

The resolution comes as international efforts to airlift foreign nationals and vulnerable Afghans out of the country come to an end after the Taliban swept back into power on Aug.15, with the United States withdrawing from the country after 20 years.

France ended its evacuation efforts on Friday and Britain followed suit on Saturday.

American troops have been scrambling in dangerous and chaotic conditions to complete a massive evacuation operation from the Kabul airport by a Tuesday deadline.