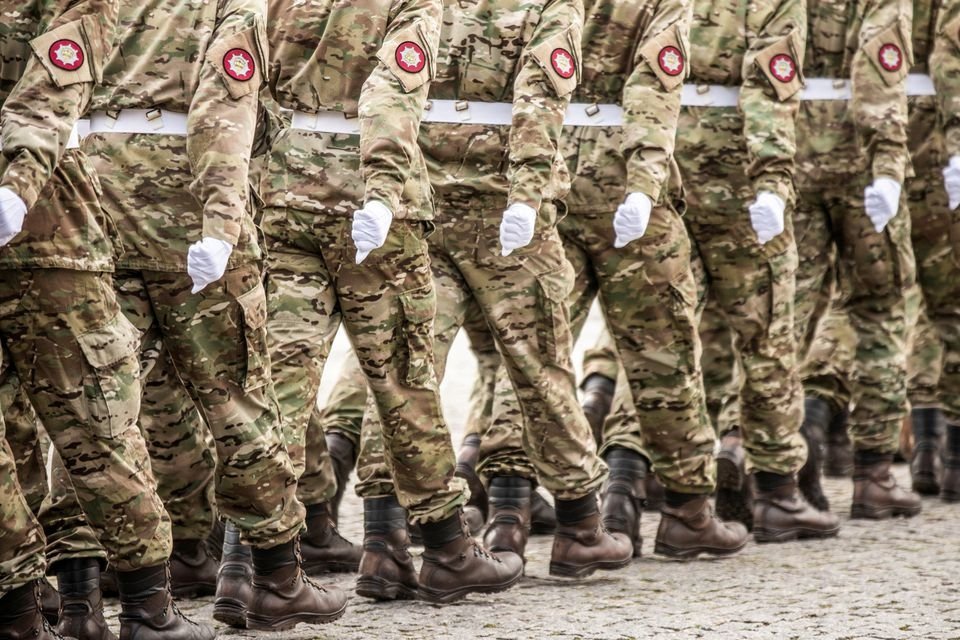 Soldiers march during a celebration of the United Nations 75th anniversary at Kastellet, Copenhagen, Denmark, Oct. 24, 2020. (Reuters Photo)
by Reuters Jun 01, 2022 9:49 am
RECOMMENDED

Denmark has voted on Wednesday to decide whether to scrap a 30-year opt-out and take part in the European Union's defense policy, potentially becoming the final holdout in the bloc to sign up as Russia's invasion of Ukraine forces countries to radically reassess their security.

Denmark is the only member of the 27 nation bloc not in the Common Security and Defence Policy, having secured exemptions from it and the euro currency in a 1993 referendum on the Maastricht Treaty, which laid the groundwork for the modern EU.

If the notoriously EU-critical Danes vote to abolish the opt-out, as polls suggest will be the case, it would mark another significant shift in policy for Europe after Russia launched the invasion in February.

Sweden and Finland this month decided to apply for NATO membership. Both Denmark and Germany have already promised to sharply raise defence spending.

"NATO will of course remain our most important tool, but the EU gives us another tool in securing our defence in the east," said Mogens Jensen, defense spokesperson for the ruling Social Democrats.

Denmark is a founding member of NATO, but the alliance's biggest military power, the United States, has signaled that European allies must take greater responsibility for their own security.

Participating in the Common Security and Defense Policy would enable Denmark to take part in joint EU military operations, such as those in Somalia, Mali and Bosnia-Herzegovina.

And while the EU will benefit from the extensive Danish experience in military operations as part of NATO and other alliances, a yes vote would be mostly viewed as a symbolic win in Brussels, according to Kristian Soby Kristensen, a senior researcher at Copenhagen University's Centre for Military Studies.

A large majority in parliament recommends abolishing the opt-out. Wednesday's vote will be the third such attempt by Danish lawmakers to lift one of the 1993 opt-outs after votes on the euro in 2000 and justice and home affairs in 2015, both of which failed.

Preliminary polls have shown a solid lead to those voting in favor of abolishing the opt-out, with close to 48% in favor and 31% against.

Naysayers have argued that EU's defense cooperation is strained by bureaucracy and inefficient decision making, while also fearing the prospect of having to contribute to a potential supranational EU army.

The EU has no plans to establish a supranational army within the bloc, but it has decided to form a rapid deployment force consisting of up to 5,000 soldiers.

Polling stations close at 6 p.m. GMT. The result is expected late in the evening.