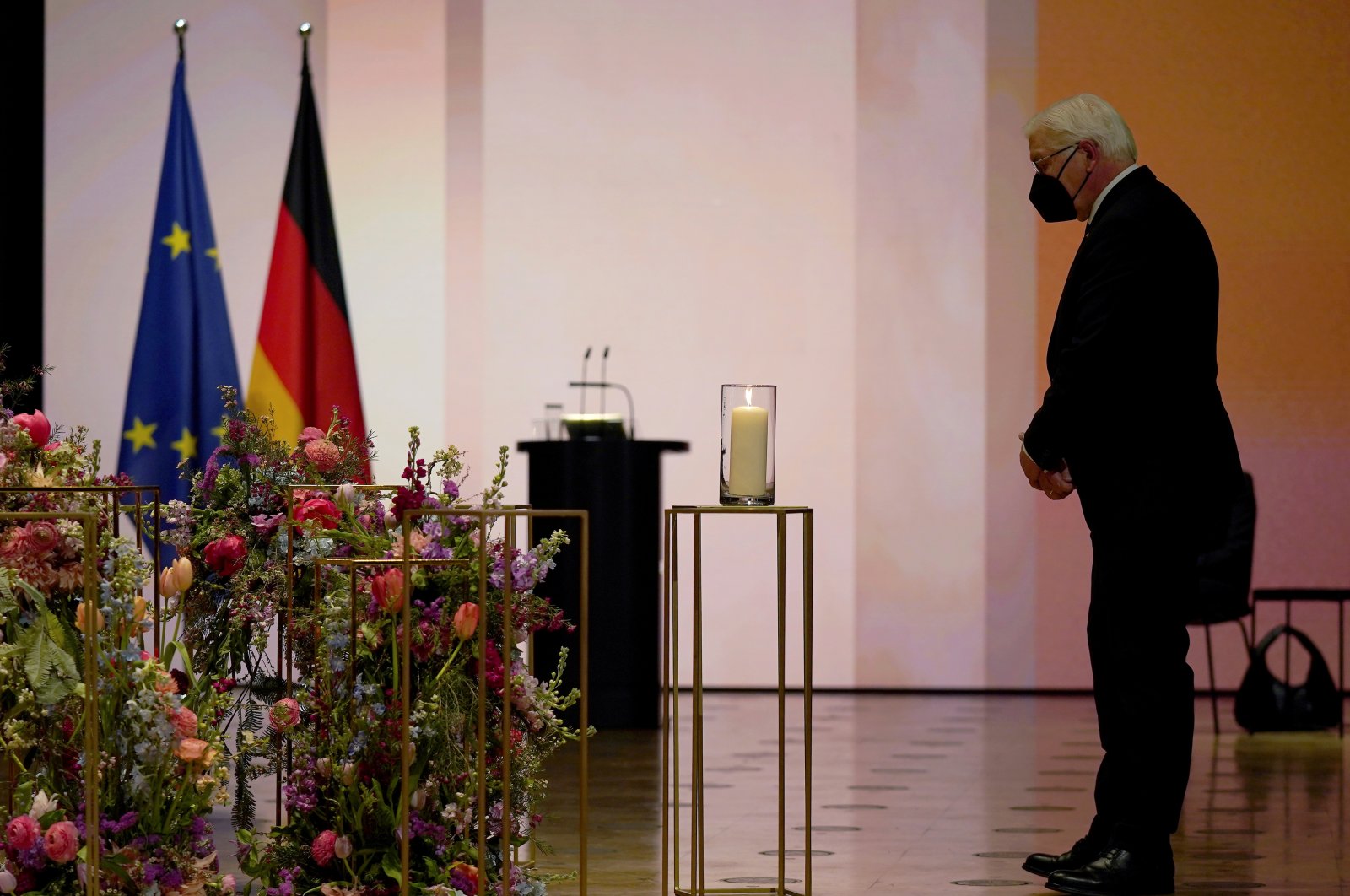 German President Frank-Walter Steinmeier stands next to a candle during a memorial ceremony for the victims of the COVID-19 pandemic, in Berlin, Germany, April 18, 2021. (Reuters Photo)
by French Press Agency - AFP Apr 18, 2021 3:29 pm
RECOMMENDED

Germany paid tribute Sunday to the nearly 80,000 people it has lost to the coronavirus, even as the country struggles to get a grip on another rise in infections, with the president urging the country to put aside deep divisions over restrictions to share the pain of grieving families.

Chancellor Angela Merkel and President Frank-Walter Steinmeier joined an ecumenical service in the morning at Berlin's Kaiser Wilhelm Memorial Church, a memorial against war and destruction, before attending a ceremony later at the capital's Konzerthaus concert hall.

"Today, as a society, we want to remember those who died a lonely and often agonizing death during this dark time," said Steinmeier. "I have the impression that we as a society do not make ourselves aware that behind all the numbers there are human fates, people.

Their suffering and their deaths have often remained invisible to the public," he said. With pandemic curbs still in force restricting the number of people who can attend, the ceremonies were being broadcast live on public television.

As the debate raged in Germany over measures put in place by Merkel's government, including the limitation of social contact to halt contagion, Steinmeier said it was a "bitter truth" that such COVID-19 restrictions had "also brought about suffering."

Besides the pain of losing a loved one, restrictions in place mean that relatives are often unable to even hold their family members' hands as they lay dying. Others have been left grieving on their own, as funerals or memorials are curtailed.

"We have restricted our lives to save lives. That is a conflict where there can be no way out without contradiction," admitted Steinmeier. But he also defended the actions, saying that "politicians must make difficult, sometimes tragic decisions to prevent an even greater catastrophe."

"My request today is this: let us speak about pain and suffering and anger. But let us not lose ourselves in recriminations, in looking back, but let us once again gather strength for the way forward."

Anita Schedel, the widow of a 59-year-old doctor who died from the virus, spoke of the ordeal of watching her husband first be hospitalized and then succumb to the disease.

"After he arrived in hospital, my husband phoned me to say 'Don't worry, I'm in good hands. We'll see each other again.' Those were his last words,'" she said at the ceremony. "Until today, my memory is haunted by those long hospital corridors, the beeping machines and my husband marked by the illness," she said.

Regional leaders had urged citizens to join in the remembrance including by lighting candles by their windows from Friday to Sunday.

"We want to be aware of what we lost, but we also want to find hope and strength together," the premiers of Germany's 16 states said in a statement.

'Only makes it worse'

Sunday's ceremony comes as health authorities warn that many more will succumb to the virus. Europe's biggest economy had come out of the first wave relatively unscathed but has struggled to take decisive action to end the current one fueled mainly by the more contagious British variant.

Another 19,185 new infections were recorded in the last 24 hours, according to the disease control agency RKI, with the number of deaths also rising by 67 to 79,914. Merkel's government is seeking greater powers to impose tougher measures such as night-time curfews, in a bid to circumvent Germany's powerful regional authorities, some of whom have resisted implementing tough restrictions.

But the amendment still has to be approved by parliament, where opposition parties like the pro-business FDP have vowed to vote against it. Even junior coalition partner SPD is still seeking modifications, including for people to be allowed to go on walks during curfew hours. Merkel urged swift and decisive action.

"The virus doesn't let you negotiate with it – it only understands one language, the language of resolve," she told the Bundestag lower house on Friday at the start of a debate on the law amendment.