Riots flare again in Northern Ireland despite calls for calm 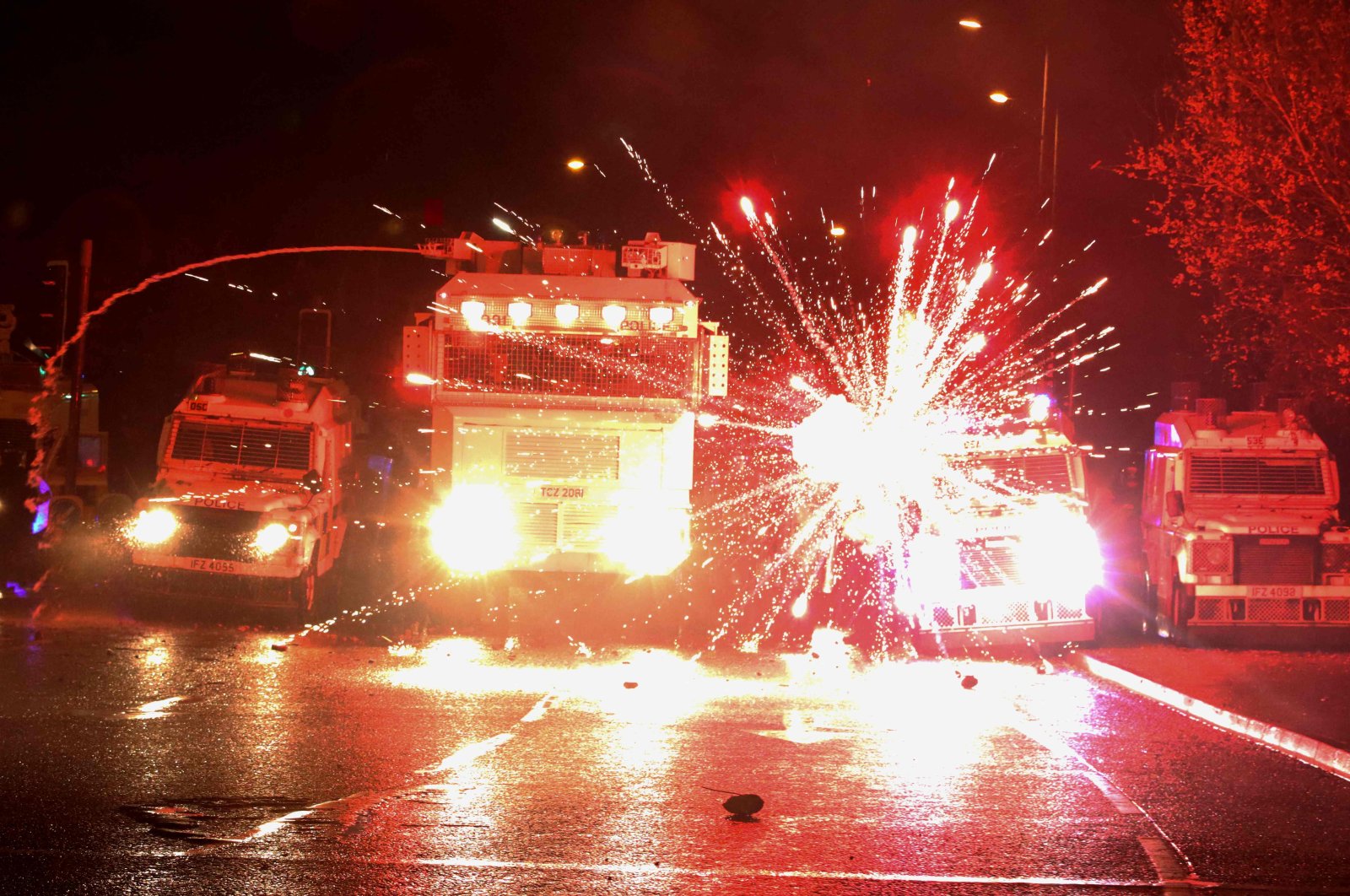 Fireworks explode at police vehicles after being fired at police officers with a water cannon during clashes with nationalist youths in the Springfield Road area as disorder continued in the Northern Ireland capital following days of mainly loyalist violence, Belfast, North Ireland, April 8, 2021. (AFP Photo)
by Agencies Apr 09, 2021 11:05 am
RECOMMENDED

Rioters waged a running battle with police in Northern Ireland's Belfast on Thursday night, throwing stones and fireworks at the officers as calls from global leaders went unheard and ignored.

Unrest has erupted over the past week amid tensions over post-Brexit trade rules and worsening relations between the parties in the Protestant-Catholic power-sharing Belfast government. The latest violence Thursday night came despite appeals by U.K. Prime Minister Boris Johnson, Irish Premier Micheal Martin and U.S. President Joe Biden for a calming of tensions.

Police holding riot shields were pelted with missiles before officers charged at the rioters with dogs. Police also used water cannons to disperse the crowds, according to The Associated Press (AP).

"There is no role for violence to resolve these issues," Britain's Transport Secretary Grant Shapps said the morning after. "We need to make sure that people are talking – but not through violence," he told Sky News.

Earlier in the day, the Northern Ireland Assembly unanimously passed a motion calling for an end to the disorder, and the region's power-sharing government condemned the violence.

"While our political positions are very different on many issues, we are all united in our support for law and order and we collectively state our support for policing and for the police officers who have been putting themselves in harm’s way to protect others," leaders of the five-party government said in a joint statement. "We, and our departments, will continue to work together to maximize the support we can give to communities and the (Police Service of Northern Ireland) to prevent further violence and unrest.”

Northern Ireland has seen sporadic outbreaks of street violence since the 1998 Good Friday peace accord ended "the Troubles” – decades of Catholic-Protestant bloodshed over the status of the region in which more than 3,000 people died.

Britain’s split from the European Union has highlighted the contested status of Northern Ireland, where some people identify as British and want to stay part of the U.K. while others see themselves as Irish and seek unity with the neighboring Republic of Ireland, an EU member.

Nationalist and unionist communities in Belfast are often separated by towering "peace walls" to guard against projectiles. On Wednesday there were ugly scenes when warring groups from unionist and nationalist communities faced off at a gate in the peace wall between their neighborhoods. The doors are etched with a slogan reading: "There was never a good war or a bad peace," as Agence France-Presse (AFP) reported.

But the gates were pried open and rioters traded missiles in vicious confrontations.

On Thursday dozens of older men and women stood at the gates where violence had flared the previous night and refused to let rioters approach. A small number of men dismantled a fire being started and blocked others approaching the gate with projectiles.