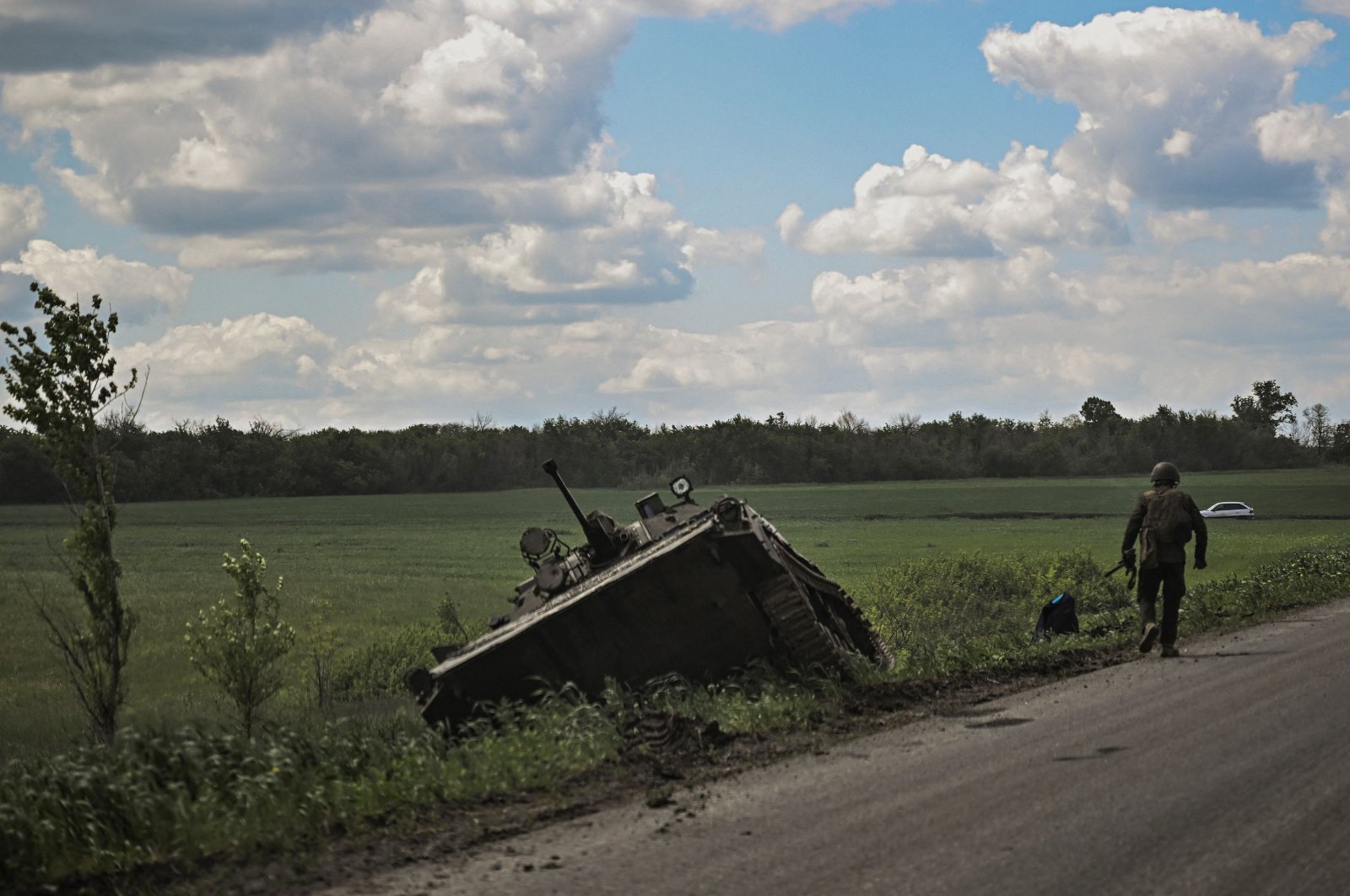 A Ukrainian officer walks next to a damaged Ukrainian armored vehicle outside the city of Lysychansk in Donbass, Ukraine, May 23, 2022. (AFP Photo)
by Agencies May 24, 2022 1:31 pm

As the war enters its fourth month, Ukraine said Russia has sent thousands of troops to capture the entire Donbass region and that Severodonetsk was under massive attack

Russian forces on Tuesday launched an all-out assault aimed at encircling Ukrainian troops in twin cities straddling a river in eastern Ukraine as the conflict entered its fourth month.

Exactly three months after Russia invaded Ukraine, authorities in the second-largest city Kharkiv were expected to open the underground metro, where thousands of civilians had sought shelter for months under relentless bombardment.

The reopening is a symbol of Ukraine's biggest military success over the past few weeks: pushing Russian forces largely out of artillery range of Kharkiv, as they did from the capital Kyiv in March.

But the decisive battles of the war's latest phase are still raging further south, where Moscow is attempting to seize the Donbass region of two eastern provinces, Donetsk and Luhansk, and trap Ukrainian forces in a pocket on the main eastern front.

The easternmost part of the Ukrainian-held Donbass pocket, the city of Severodonetsk on the east bank of the Donets river and its twin Lysychansk on the west bank have become the pivotal battlefield there, with Russian forces advancing from three directions to encircle them.

Further west in Slovyansk, one of the biggest Donbass cities still in Ukrainian hands, air raid sirens wailed on Tuesday morning but streets were still busy, with a market full, children riding on bikes and a street musician playing violin by a supermarket.

Two empty public transport buses were driving towards the frontline town of Lyman to evacuate civilians from heavy shelling there, escorted by police and a military car.

Workers digging through rubble found 200 bodies in Mariupol, Ukrainian authorities said Tuesday, another grim discovery in the ruined port city that has seen some of the worst suffering of the three-month-old war.

The bodies found in the basement of a collapsed apartment building were in a state of decomposition and a stench permeated the neighborhood, said Petro Andryushchenko, an adviser to the city’s mayor.

Mariupol, which the Russians recently claimed full control over, has endured some of the worst suffering of the war and became a worldwide symbol of defiance for the diehard defense put up for months by fighters at a steelworks.

The announcement of the discovery of the bodies came shortly after Ukrainian President Volodymyr Zelenskyy accused Russia of waging “total war,” seeking to inflict as much death and destruction as possible on his country.

“Indeed, there has not been such a war on the European continent for 77 years,” Zelenskyy told Ukrainians Thursday night, on the eve of the three-month anniversary of the start of the war.

He pointed to a missile attack that killed 87 people last week in the town of Desna, 55 kilometers (35 miles) north of Kyiv, one of the deadliest single strikes in the war.

'Who will bury them?'

"The enemy has focused its efforts on carrying out an offensive in order to encircle Lysychansk and Sievierodonetsk,” said Serhiy Gaidai, governor of Luhansk, where the two cities are among the last territory still held by Ukraine.

"The intensity of fire on Severodonetsk has increased by multiple times, they are simply destroying the city," he said on TV, adding there were about 15,000 people in the city and the Ukrainian military remains in control of it.

Gaidai said Ukrainian forces had driven the Russians out of the village of Toshkivka just to the south of Severodonetsk. That could not be independently confirmed. Four people had been killed in the shelling of one home in Severodonetsk overnight.

The battle there follows the surrender last week of Ukraine's garrison in the port of Mariupol after nearly three months of siege in which Kyiv believes tens of thousands of civilians have died.

Russia is now in control of an unbroken swathe of eastern and southern Ukraine, but has yet to achieve its objective of seizing all of Luhansk and Donetsk.

U.S. President Joe Biden, meeting the leaders of Japan, India and Australia in Tokyo, said the war showed the importance of defending international law and human rights around the world. Biden also said the crisis in Ukraine was a global issue that heightened the importance of maintaining international order, territorial integrity and sovereignty.

The previous day he broke with convention to say openly that the United States would use its military to protect Taiwan, the self-ruled island claimed by China. Biden's remarks on Taiwan were seen as a sign of how three months of what Washington and its allies describe as an unprovoked Russian war of aggression in Ukraine have invigorated Western resolve on security issues.

Russia's invasion, the biggest attack on a European state since 1945, has seen more than 6.5 million people flee abroad, turned entire cities into rubble and brought down severe economic sanctions on Moscow.

At a cemetery outside Mariupol, treading through long rows of fresh graves and makeshift wooden crosses, Natalya Voloshina, who lost her 28-year-old son in the fight for the city, said many of Mariupol's dead had no one left to honor their memory.

"Who will bury them? Who will put up a plaque?" she asked. "They have no family."