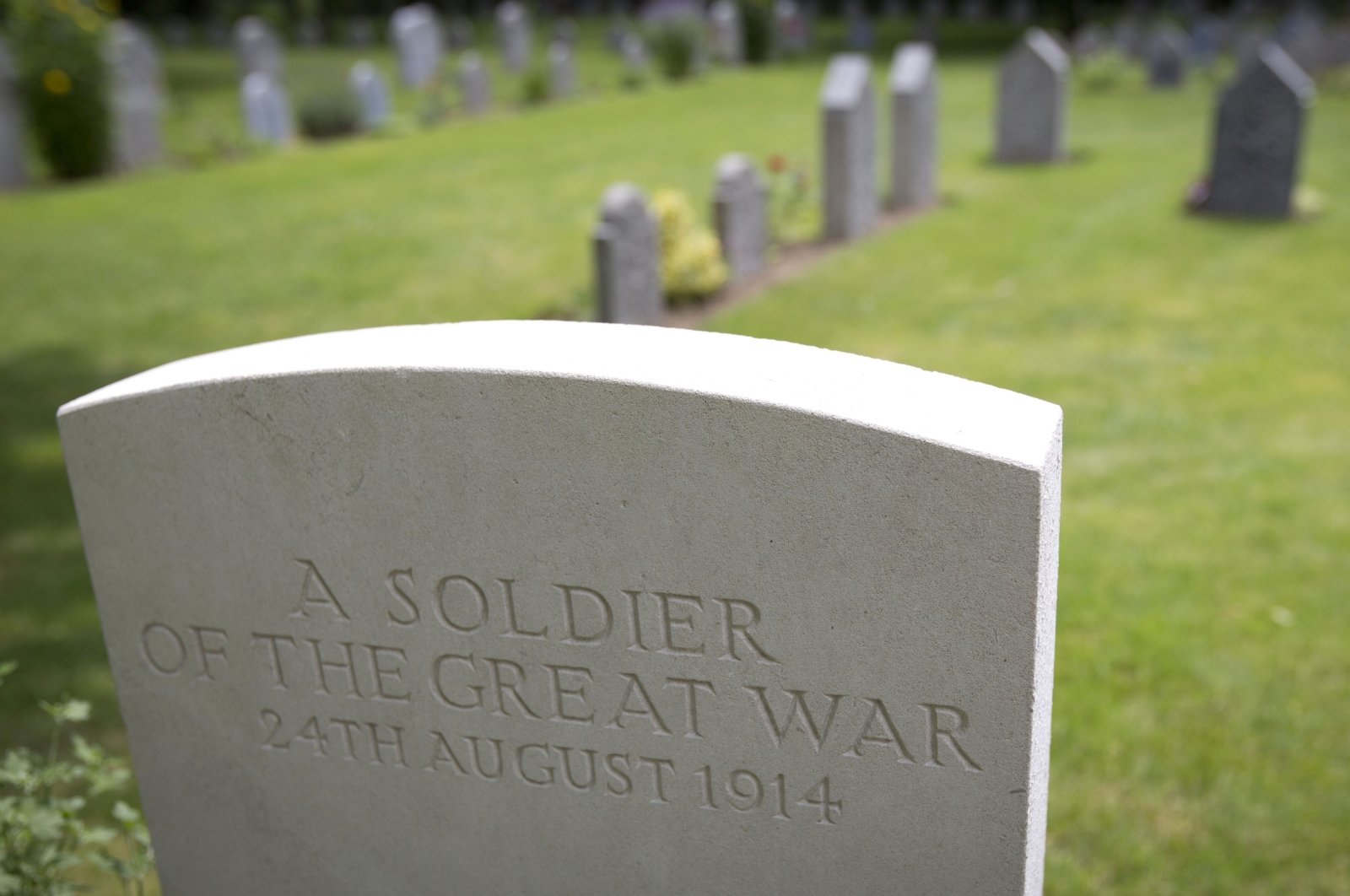 The grave of an unknown Commonwealth soldier from World War I in the foreground and German soldiers' graves in the background, at the St. Symphorien Cemetery near Mons, Belgium, July 26, 2014. (AFP Photo)
by Agencies Apr 22, 2021 2:37 pm
RECOMMENDED

As many as 350,000 black and Asian service personnel who died fighting for the British Empire were not properly commemorated due to "pervasive racism," according to a report released Thursday.

The Commonwealth War Graves Commission (CWGC) apologized after an investigation found that the fallen personnel "were not commemorated by name or possibly not commemorated at all," adding the number treated unfairly could be as high as 350,000 soldiers.

"There can be no doubt: prejudice played a part in some of the commission's decisions," Defense Secretary Ben Wallace told Parliament, according to Reuters.

"On behalf of the Commonwealth War Graves Commission and the government, both of the time and today, I want to apologize for the failures to live up to their founding principles all those years ago, and express deep regret that it has taken so long to rectify," Wallace said.

The report comes as Britain reckons with the legacy of its colonial past and links to slavery, against a backdrop of anti-racism and Black Lives Matter protests. Last month, there was a backlash at a government-commissioned report which concluded prejudice persists but the country is not "institutionally racist", enraging equality campaigners.

The CWGC said the failure to honor the troops was, "influenced by a scarcity of information, errors inherited from other organizations and the opinions of colonial administrators. Underpinning all these decisions, however, were the entrenched prejudices, preconceptions and pervasive racism of contemporary imperial attitudes."

It cited a 1923 conversation between Brig. Gen. Gordon Guggisberg, the then-governor of British-controlled Gold Coast (modern-day Ghana), and the commission's Arthur Browne.

Guggisberg said "the average native ... would not understand or appreciate a headstone," as he argued for collective memorials without individual names. The CWGC was set up during World War I to remember Britain's war dead. It cares for war graves at 23,000 locations in more than 150 countries, commemorating nearly 1.7 million people.

'Equality of treatment in death'

The Imperial War Graves Commission (IWGC), which became the CWGC, was founded on the principle of "equality of treatment in death," regardless of rank, class, religion, or provenance. But while that aim was achieved in Europe, "the promise of equality had limits elsewhere" where there was fighting during the conflict, the report said.

"In conflict with the organization's founding principles, it is estimated that between 45,000 and 54,000 casualties (predominantly Indian, East African, West African, Egyptian and Somali personnel) were commemorated unequally," it said, as Agence France-Presse (AFP) reported. "For some, rather than marking their graves individually, as the IWGC would have done in Europe, these men were commemorated collectively on memorials."

"For others who were missing, their names were recorded in registers rather than in stone. A further 116,000 casualties (predominantly, but not exclusively, East African and Egyptian personnel) – but potentially as many as 350,000 – were not commemorated by name or possibly not commemorated at all," continued the report.

The CWGC acknowledged that it had "failed to fully carry out its responsibilities at the time and accepts the findings and failings identified in this report and we apologize unreservedly for them." CWGC Director-General Claire Horton said, "The events of a century ago were wrong then and are wrong now."

The study was set up following a documentary on the issue by David Lammy, a main opposition Labor lawmaker, who is the party's spokesperson on justice.

"No apology can ever make up for the indignity suffered by The Unremembered," he wrote on Twitter. "However, this apology does offer the opportunity for us as a nation to work through this ugly part of our history – and properly pay our respects to every soldier who has sacrificed their life for us."