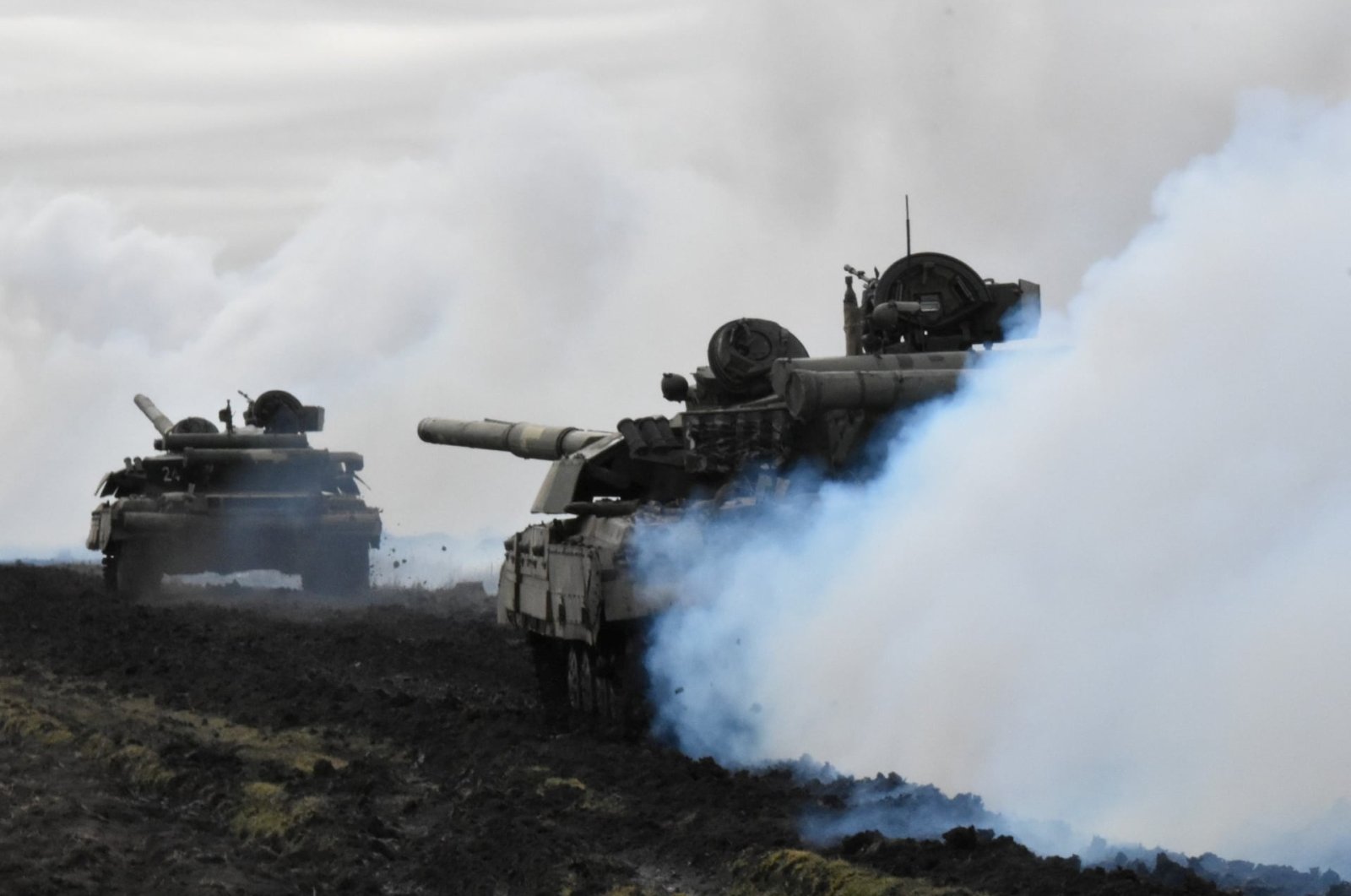 Tanks of the Ukrainian Armed Forces are seen during drills at an unknown location near the border of Russian-annexed Crimea, Ukraine, April 14, 2021. (General Staff of the Armed Forces of Ukraine press service via Reuters)
by REUTERS Apr 14, 2021 4:57 pm
RECOMMENDED

Russia is preparing to store nuclear weapons in Crimea, the Ukrainian defense ministry said Wednesday, warning about a possible scenario where Moscow attacks Ukraine to ensure water supplies for the annexed peninsula.

Andrii Taran, speaking to the European Parliament's defense sub-committee in Brussels, also said he could not rule out that Russian forces in Crimea could "undertake substantive military provocations" in 2021, according to Reuters.

"Crimea's infrastructure is being prepared for potentially storing nuclear weapons," Taran told the European Parliament's sub-committee on defense. "The very presence of nuclear munitions in the peninsula may spark a whole array of complex political, legal and moral problems."

Taran provided no evidence for his assertion.

Any Russian decision to move nuclear weapons to Crimea, which juts into the northern Black Sea, would mark a significant worsening in East-West tensions. It would also strain a newly-extended arms control treaty between the United States and Russia, which imposes restrictions on the land and submarine-based missiles used to carry nuclear warheads.

Earlier Taran said his country could be provoked by Russian aggravation of the situation in the conflict area of Ukraine's eastern Donbass region. The minister said Russian accusations about the rights of Russian speakers being violated could be the reason for the resumption of armed aggression against Ukraine.

"At the same time, it should be noted that the intensification of the armed aggression of the Russian Federation against Ukraine is possible only if an appropriate political decision is made at the highest level in the Kremlin," he said in a statement.

Ukraine's armed forces rehearsed repelling a tank and infantry attack near the border of Russian-annexed Crimea Wednesday, the Ukrainian military said in a statement. The drills came a day after United States President Joe Biden phoned Russian President Vladimir to discuss a buildup of Russian troops near eastern Ukraine and in Crimea, among other U.S. concerns.

Russia seized Crimea from Ukraine in 2014 and fighting has increased in recent weeks in eastern Ukraine, where government forces have battled Russian-backed separatists in a seven-year conflict that Kyiv says has killed 14,000 people. NATO says the number of Russian troops massed on Ukraine's borders is the highest since 2014.

U.S. Defense Secretary Lloyd Austin met NATO Secretary-General Jens Stoltenberg at NATO headquarters on Wednesday to discuss the Ukraine crisis ahead of the meeting of all 30 allies by video conference.

"We have a number of very important issues to talk about, not the least of which is Russia," Austin told reporters. "And I certainly share your concern with the recent build-up on the Ukraine border of Russian forces."

The Ukrainian military said it had deployed tanks and artillery in Wednesday's drills to practice repelling a force of tanks and infantry trying to break through its defenses. It posted video footage, set to rock music, of Ukrainian tanks maneuvering in formation and of soldiers loading and firing artillery pieces.

Russian Defense Minister Sergei Shoigu said Tuesday that Moscow's military buildup near Ukraine was part of a large snap drill meant to test combat readiness and respond to what he called threatening military action by NATO. Shoigu said that the three-week exercise – which he called successful – was due to wrap up in the next two weeks. Shoigu said NATO was deploying 40,000 troops and 15,000 pieces of military equipment near Russia's borders, mainly in the Black Sea and the Baltic regions. The Western alliance denies any such plans.