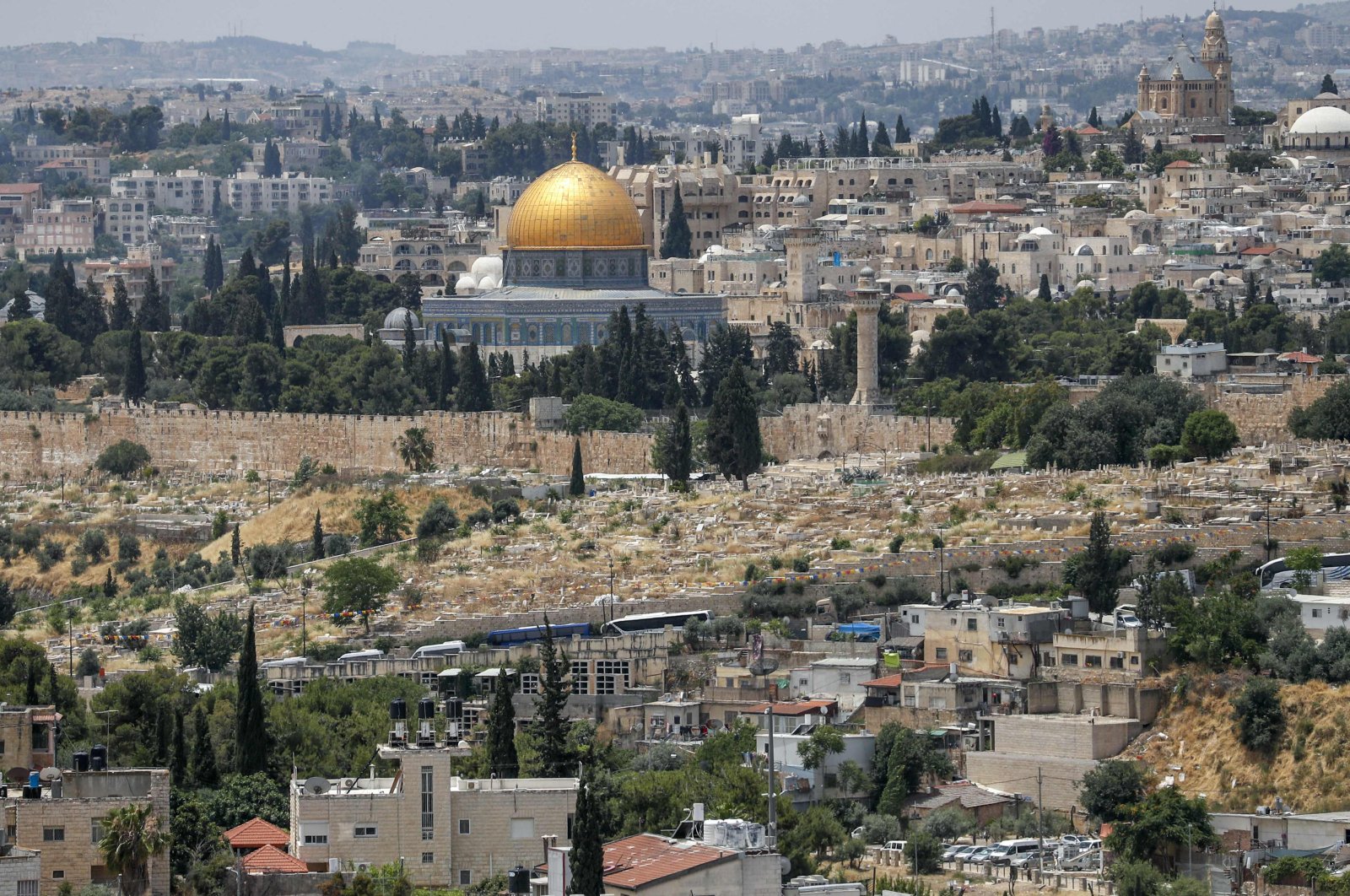 This June 3, 2020, picture shows a view of the Palestinian neighborhood of Wadi al-Joz (below) in occupied east Jerusalem, with a backdrop of the Dome of the Rock Mosque in Jerusalem's old city. Palestinian business owners in occupied east Jerusalem are worried they will be forced to shut up shop by Israeli authorities over plans to build a vast high-tech hub in their neighborhood. (Photo by AHMAD GHARABLI/AFP)
by French Press Agency - AFP Jun 08, 2020 11:55 am
RECOMMENDED

Palestinian business owners in occupied east Jerusalem are worried they will be forced to shut up shop by Israeli authorities over plans to build a vast high-tech hub in their neighborhood.

The main thoroughfare through the Wadi el-Joz area, close to Jerusalem's Old City, is lined by mechanic workshops and usually hums with the sound of car horns. But business owners are facing an uncertain future, with fears that more than 200 premises could be forced to close including garages and popular restaurants.

Fathi al-Kurd, whose workshop opened in 1966, is worried that he and his two sons will not be offered another location. "My son has four children, if he doesn't work for a week his children will starve," the 77-year-old told AFP. "We can't confront this (municipal) government, but we ask that they at least provide us with an alternative," he added.

His son Muhannad al-Kurd, a car electrician, said a municipal official visited them last summer and warned: "eviction is coming." East Jerusalem was occupied by Israel in the 1967 Six-Day War and later annexed in a move never recognized by the international community.

The Jerusalem municipality aims to create a "new high-tech center" that would "reduce social gaps and economic inequality in east Jerusalem," according to city hall. The 2.1-billion shekel ($600 million) project has allocated 250,000 square meters (2.7 billion square feet) of land for the technology park. A further 50,000 square meters has been earmarked for other businesses and the same amount for hotels. In a video, the Jerusalem municipality extols the central location and the "potential" of Wadi al-Joz, which lies near major roads.

Several Palestinian families own land in the industrial zone of east Jerusalem, including Naif al-Kiswani who says they will inevitably be drawn into the Israeli project. "I want to be compensated financially and given licenses to build shops, businesses and flats," he said, sitting inside his hardware store.

Kiswani confirmed that talks about the redevelopment were underway with Israeli officials, with a meeting planned soon between Palestinian landowners and Jerusalem's deputy mayor. "The project exists and our refusal won't change anything, but we must not lose everything," he said.

Concerns over the redevelopment come as businesses are gradually reopening, after measures to tackle the novel coronavirus brought the city to a standstill. Muhannad al-Kurd said his income fell by 70 percent in recent months and the new project could bring further financial losses.

"This eviction will make us start from scratch," he said.

Wearing a face mask at the garage where he works, Khalil al-Hawash said the project aims to "empty the city of Palestinians." Standing in front of a sign for the garage in both Arabic and Hebrew, he wanted to know whether there would be compensation or help to relocate elsewhere.

Economist Mohammed Qirsh says if the business owners are expelled without financial redress the impact would be "devastating." City hall says the project will create 10,000 jobs in east Jerusalem and increase the employment rate among women. It stands to "build confidence between residents of that part of the city, the city hall and the government," the municipality said.

Some of those affected by the redevelopment plans aim to form a committee to challenge the decision. Jerusalem Mayor Moshe Lion said the project constitutes a "real revolution and will create hope." The president of the Palestinian Chamber of Commerce in Jerusalem, Kamal Obidat, described it as a plan to "liquidate" parts of the city and "Judaise" them. His work in Jerusalem and that of the Palestinian government is banned by Israel.