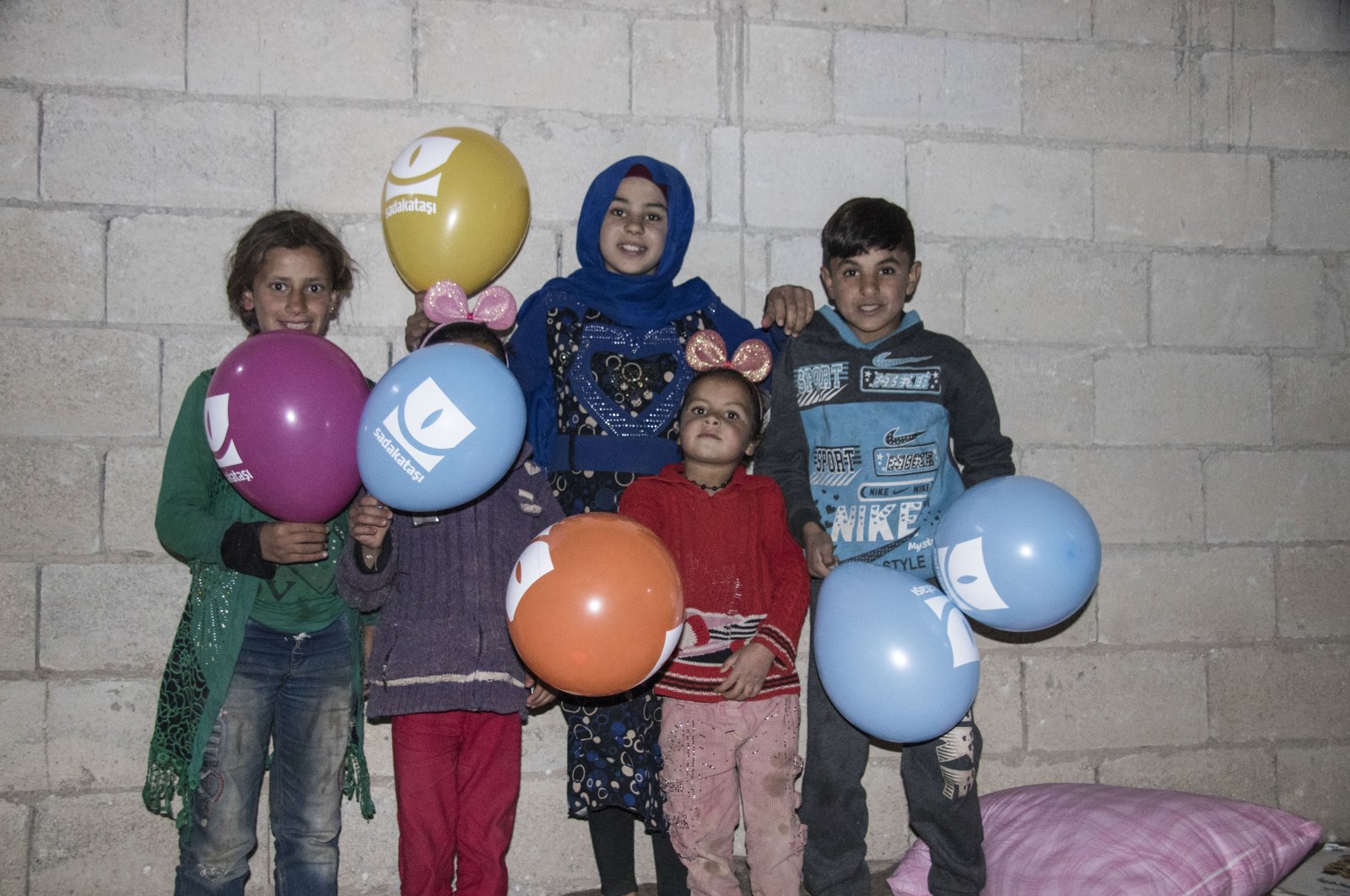 Sadakataşı organization provided the 12-year-old Syrian girl, Zeynep (C), who lost her parents in Bashar Assad regime attacks and is taking care of her three siblings and her family, in a briquette house in Idlib, Syria, March 31, 2021. (AA Photos)
by Daily Sabah with AA
Mar 31, 2021 1:55 pm

Zeynep Aşık, a 12-year-old Syrian girl, who lost her parents in Bashar Assad regime attacks and is taking care of her three siblings, now has a briquette house in Idlib, thanks to the efforts of the Sadakataşı Association from Turkey.

Sadakataşı Association placed Aşık and her family in a newly-built briquette house near the Turkish border, in the northwestern province of Idlib. The organization is now planning to build a school in the area to provide education, one of Aşık's biggest dreams, to her and many other children affected by the civil war.

Aşık's story was heard after an Anadolu Agency (AA) report by on March 10. Within three weeks, Aşık and her siblings were provided a house in Idlib's Kelbit village.

Sadakataşı Association's Syria studies officer, Hüseyin Kumru, told AA that they took action for Aşık and her family after seeing the news.

"We placed Zeynep and her family, who lived in unhygienic conditions, in one of the briquette houses we built in the Kelbit region of Idlib," Kumru said.

Saying that the Sadakataşı Association is providing the family all household needs, including food, stove and fuel, Kumru said they will also help realize Aşık's biggest dream of going to school.

Kumru said hundreds of thousands of civilians had taken shelter on Turkey's border, a relatively safe zone, after attacks by the Syrian regime and its supporters.

"In order to solve the housing problem that civilians have experienced, collective housing projects are carried out in 19 different regions, consisting of a total of 3,500 briquette houses. Around 20,000 civilians will benefit from these houses. We also built mosques, schools and parks in line with the people's needs," he said.

Launched on Jan. 13, 2020, in coordination with Turkey's Disaster and Emergency Management Presidency (AFAD), the "We are together, We are siding with Idlib" aid campaign which is designed to built briquette houses for the refugees received major support from other Turkish aid organizations, including the Turkish Red Crescent (Kızılay), the Humanitarian Relief Foundation (IHH), the Sadakataşı Association, the Türkiye Diyanet Foundation and many more.

Back in June 2020, Erdoğan pledged to fund the construction of 50 briquette homes for civilians in Idlib, saying Turkey planned to fulfill the target during the summer so the shelters would be ready for the refugees before winter sets in.

"They provided all our needs"

Aşık said she was very happy to have a house.

"We used to live in a tent which was inundated by water in winters," Aşık said, "Sadakataşı Association carried us to the briquette house. They provided all our needs. Thank you."

Aşık said she had received letters of support from Turkey and felt that she was not alone.

She had to leave in second grade to take care of her siblings and sick grandfather but wanted to go back to school. "I take care of my brothers and sisters. I wash their clothes, cook their meals, burn the stove to keep them warm and clean the house," she said.

Her grandfather, Ahmet Aşık, 77, who has lung and heart diseases, said, "Zeynep is just 12, but she has handled responsibilities like a 25-year-old. She meets the needs of her siblings. She is a mother and father for them."

The grandfather said he could not get out of bed and did not have the strength to work. He called for help so that his grandchildren can live a good life and have educational support.

The Syrian Network for Human Rights told Daily Sabah earlier that the Assad regime and its allies have carried out at least 75 attacks since Turkey launched Operation Spring Shield and brokered a cease-fire last March.

The lives of Syrian people dealing with many difficulties in rural Idlib's tent camps have become much harder due to the recent winter conditions. With the humanitarian catastrophe in the region reaching new heights, people try to survive by taking shelter under trees or in shaky tents built on mud and puddles.

Since December 2019, almost 1 million people have fled the Assad regime’s offensive on Idlib, considered the last opposition bastion, with many seeking refuge in overcrowded tent camps near the Turkish border.

A fragile truce was brokered between Moscow and Ankara in March 2020 in response to the months of fighting by the Russia-backed forces, but the regime still frequently carries out attacks on civilians, hindering most from returning to their homes and forcing them to seek safety at makeshift camps.