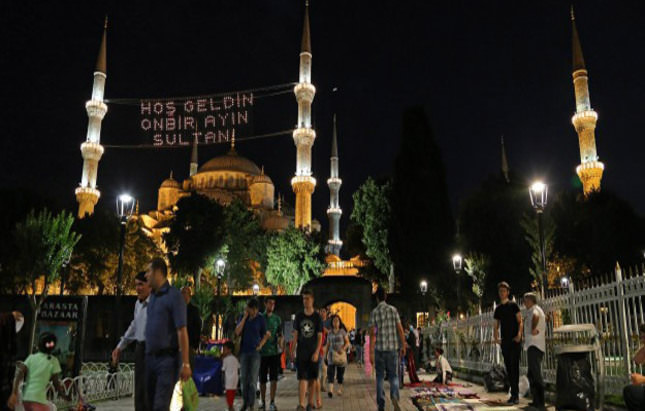 The first suhoor - a Ramadan meal before dawn - took place in the country's northeastern city of Ardahan at 2.39 a.m. on Saturday while the last one occurred in the southwestern city of Mugla at 4.02 a.m.

Fasting, held from sunrise to sunset during Ramadan, is one of the Five Pillars [fundamental religious duties] of Islam. It is a time of self-examination and increased religious devotion. Ramadan will continue for 30 days.

Welcoming the holy month of Ramadan, Muslims across Istanbul also rushed to mosques to perform Tarawih prayers, an extra prayer specific to Ramadan, according to the practices of Prophet Mohammed, performed by Muslims following the obligatory night prayer known as 'Isha.

The Blue Mosque is a symbolic space for these prayers.

The first Tarawih, which are held in mosques every night of the month, began on Friday.

During Ramadan, municipalities in Istanbul will organize mass iftar meals - free meals consisting of things such as soup, stew, pudding and juice - and street festivals such as clown and shadow puppet shows for locals.

Sighting the new crescent moon is essential for the start of any month in the Islamic lunar calendar.

As the new moon was not sighted on Friday in most Arab and African nations, Sunday has been declared the first day of the holy Muslim month.

During Ramadan, Muslims must abstain from food, drink, smoking and sex from sunrise to sunset.

Throughout the course of the fasting month, Muslims are urged to perform extra prayers, especially at night, recite the Quran, give to the poor and refrain from misbehavior.