Hirka–i Şerif, the cloak that was worn by Prophet Muhammad, open for visitation 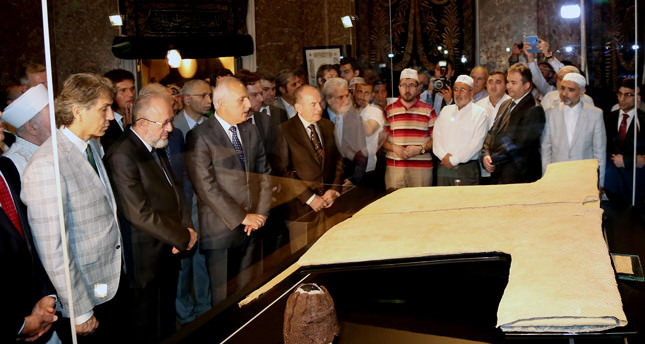 The cloak was given a special ceremony, which was held in the courtyard of the mosque and attended by Istanbul Governor Hüseyin Avni Mutlu, Metropolitan Municipality Mayor Kadir Topbaş, Istanbul Mufti Rahmi Yaran, Fatih district Governor Ahmet Ümit, Fatih Mayor Mustafa Demir, and Fatih Mufti İrfan Üstündağ along with other citizens.

After a special Quran recitation and a prayer led by Fatih Mufti İrfan Üstündağ, the relic was announced as open for visitation. It was first visited by the Istanbul Governor Hüseyin Avni Mutlu and Metropolitan Municipality Mayor Kadir Topbaş.

Governor Mutlu stated the presence of the cloak brings to Istanbul great spiritual value particularly in the month of Ramadan. Mutlu reiterated that the "hırka" of Prophet Muhammed is preserved by Uwais al-Qarani's family who are considered great inheritors of the Prophetic tradition.

The mosque, which has been and is still closed for restoration, will have a section that is open exclusively for the visitation of Hırka- i Şerif. A new elevator will allow for the sick, disabled, elderly and pregnant to see the cloak without having to wait in queue.