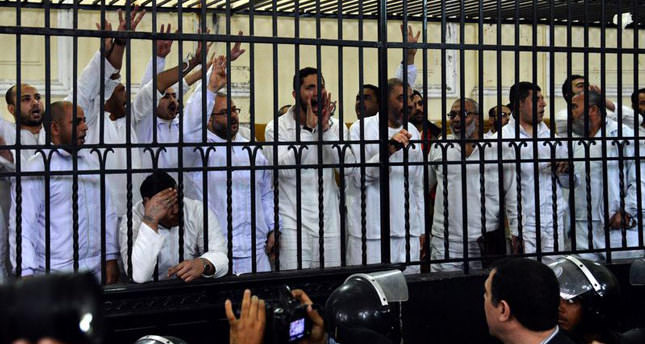 Lawyers for two of Morsi's co-defendants had asked for the bench, chaired by judge Shaaban al-Shami, to be recused after it refused to order the removal of a soundproof glass barrier around the cage in which the defendants appear.

The trials of Egypt's first freely elected president and dozens of other Muslim Brotherhood members were put on hold in late February
pending the decision of the Cairo Appeals Court.

In the conspiracy trial, Morsi and 35 of his supporters are accused of agreeing with the Palestinian Hamas and Lebanese Hezbollah groups to
carry out terrorist attacks to "create chaos to bring down the Egyptian state and its institutions."

In the jailbreak trial, being heard by the same court, Morsi and others are accused of conspiring with Hamas and Hezbollah to escape
from and storm prisons during the 2011 uprising against former president Hosni Mubarak.

A third trial before different judges, in which Morsi is charged with involvement in the killing of protesters in clashes outside the presidential palace during his tenure, resumed on Saturday after another recusal plea was dismissed.

Almost all the Muslim Brotherhood's senior leaders have been arrested or fled the country since the military toppled Morsi in July amid mass demonstrations against his one-year rule.

Thousands of lower-level followers have also been rounded up, with hundreds killed in an ongoing police crackdown on protests.

The army chief who deposed Morsi, Abdel-Fattah al-Sissi, is widely expected to win presidential elections scheduled for late May.