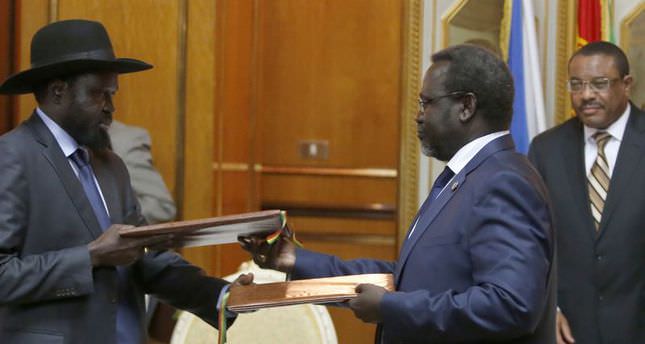 by AA May 11, 2014 12:00 am
ADDIS ABABA - South Sudanese President Salva Kiir and rebel leader Riek Machar, whose respective forces are currently engaged in fierce fighting, signed a peace deal on Friday that aims to end the conflict that has raged in the nascent country since last December.

Under the deal, a ceasefire will go into effect within 24 hours while aid agencies and the United Nations will be given unconditional access to the areas most affected by the conflict.
The deal also calls for the formation of a transitional government that would pave the way for consultations over the formation of a permanent government. A permanent constitution should also be drafted, according to the deal's terms.
South Sudan has been shaken by violence since last December, when Kiir accused Machar of leading a failed coup attempt against his regime.
The conflict has already claimed more than 10,000 lives, with the U.N. estimating that some one million South Sudanese have been displaced as a result of the violence.
Last Update: May 11, 2014 11:53 am
RELATED TOPICS