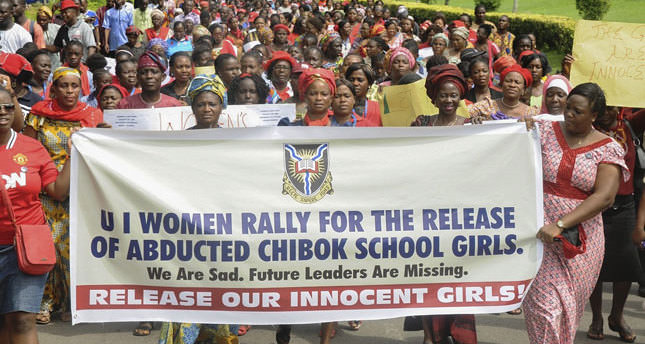 More than three weeks after the Boko Haram terrorist group abducted over 300 girls from their school in Nigeria's remote northeast, world outrage is galvanizing Twitter and other social media networks

NIGERIA — While parents of the kidnapped Nigerian schoolgirls are hoping for a miracle, worldwide protest over the schoolgirls is growing.

Police say 276 girls remain in captivity. The case was not widely followed until #Bring-BackOurGirls and other hashtags attracted a torrent of attention. "People are finally taking it seriously," said Fayokemi Ogunmola, a Nigerian-born student at the University of Rochester who leads her campus Pan-African Students Association.

Ongumola had followed the story since it broke on April 15 but only recently saw more interest among classmates using the #Bring-
BackOurGirls hashtag and wearing head wraps or the green and white of the Nigerian flag. "It's a nice thing to use social media to get it out. This is a step in the right direction,"

Ogunmola said. "But the point is to actually find the girls."

More than 2.1 million tweets using #Bring-BackOurGirls have been posted, according to Topsy, a site that offers Twitter analytics. Interest was relatively low until last week, when celebrities including singer Chris Brown sent messages that were widely circulated.

More than 380,000 tweets carried the hashtag Wednesday, including one from U.S. First Lady Michelle Obama, who has been retweeted more than 53,000 times. On Saturday, Michelle Obama made a public appeal for the release of the girls, saying their case highlights global challenges to girls' education.

Assuming the president's weekly internet and radio address, the First Lady said she and her husband President Barack Obama were "outraged and heartbroken" by the mass abduction. "In these girls, Barack and I see our own daughters. We see their hopes, their dreams - and we can only imagine the anguish their parents are feeling right now," she said. The Obamas have two daughters - Sasha, 12, and Malia, 15.

Of the Nigerian schoolgirls, Mrs. Obama said, "These girls embody the best hope for the future of our world... and we are committed to standing up for them not just in times of tragedy or crisis, but for the long haul.

Mrs. Obama said the kidnappings were an "unconscionable act" of "grown men attempting to snuff out the aspirations of young girls."
She further warned that what happened in Nigeria is not an isolated event. "It's a story we see every day as girls around the world risk their lives to pursue their ambitions."

Last week, the White House announced that U.S. President Barack Obama directed his government to do everything it can to secure the rescue of the Nigerian girls.

On Tuesday, Nigerian President Goodluck Jonathan accepted a U.S. offer to support Nigeria's rescue effort with an American interagency team of advisors from law enforcement and the military.

British Prime Minister David Cameron has promised Britain "will do what we can" to help find kidnapped Nigerian schoolgirls. Cameron made the comments as he held a sign bearing the slogan #Bring Back Our Girls on the BBC's Andrew Marr show.

During the program, fellow guest Christiane Amanpour, CNN's chief international correspondent, handed Mr. Cameron the sign and asked if he would like to join the campaign.

Taking it from her, he replied: "Happily."

He told the BBC One program, "I rang the Nigerian president to offer anything that would be helpful and we agreed to send out a team that includes some counter-terrorism and intelligence experts to work alongside the bigger American team that's going out there." He added, "We stand ready to do anything more that the Nigerians would want."

G. Nelson Bass III, a professor who teaches politics and international relations at Nova Southeastern University in Florida, said the #BringBackOurGirls campaign appears far closer to the Kony campaign than to the kind of social media activity that organized much of the Arab Spring movement.

The acclaimed Nigerian-American author Teju Cole, writing for The New Yorker, called the abductions Twitter's "cause of the day." Writing on Twitter, he suggested the hashtag campaign was accomplishing little, saying: "For four years, Nigerians have tried to understand these homicidal monsters. Your new interest (thanks) simplifies nothing, solves nothing."

Gordon Coonfield, a Villanova University professor who studies new media, said the story of the Nigerian girls is following a familiar arc, in which interest is ignited and then quickly dissipates.

The drama presents an opportunity to the masses to casually adopt the hashtag as their cause. "People can care so fiercely at this moment only on the condition that they can completely forget about it tomorrow," he said.

Boko Haram has been active since 2002 but their attacks have picked up since 2009 after the death of their founding leader, Mohammed Yusuf. Among the actions carried out by the group were bank robberies, attacks targeting Christian worshipers at Churches and suicide
bombings.