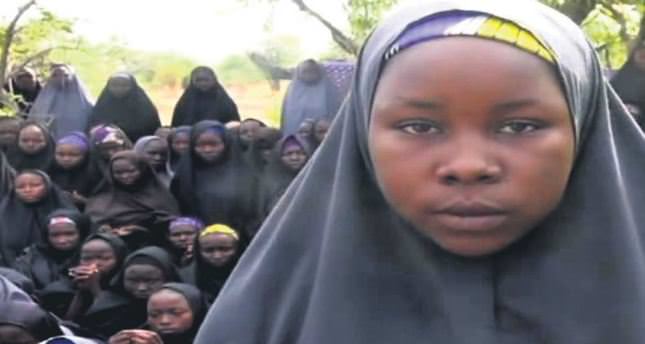 by Anadolu Agency May 13, 2014 12:00 am
CHIBOK, Nigeria — The Nigerian terrorist group Boko Haram, which kidnapped more than 200 schoolgirls last week, claiming it would be selling them in a market, announced yesterday that it had converted the girls and was willing to release them if all militants in prison were released.

The leader of the terrorist organization Boko Haram, Abubakar Shekau said he will release more than 200 schoolgirls abducted by his fighters last month in exchange for prisoners, according to a video seen by Agence France-Presse yesterday.

Around 100 girls wearing full veils and praying are shown in an undisclosed location in the 17-minute video in which Boko Haram leader Abubakar Shekau speaks, according to the French news agency.

International efforts have widened to trace more than 200 schoolgirls abducted by Boko Haram in Nigeria, while France has called for African leaders to hold a summit focused on the issue.

Israel on Sunday joined the bid to find the 223 schoolgirls abducted by Boko Haram fighters in Nigeria's restive northeast four weeks ago, but Washington said U.S. troops would stay out of any rescue mission. "There's no intention, at this point, to [put] American boots on the ground," U.S. Defense Secretary Chuck Hagel told ABC television, admitting that finding the girls would be no easy task. Nigeria's President Goodluck Jonathan spoke to Israeli Prime Minister Benjamin Netanyahu by telephone and accepted an offer for assistance in finding the girls, who were kidnapped from their school dormitory in the town of Chibok, Borno state, on April 14.

Jonathan told Netanyahu that "Nigeria would be pleased to have Israel's globally acknowledged anti-terrorism expertise deployed to support its ongoing operations," according to the president's spokesman Reuben Abati.

Britain, the United States and France have already sent specialist teams and equipment to help Nigeria's military in the search concentrated in the remote northeast, which has been hit by five years of deadly violence.

French President Francois Hollande said a summit on security in west Africa, focusing on Boko Haram, could be held as early as this Saturday "if the countries agree." "I suggested, with Nigerian President Goodluck Jonathan, a meeting of Nigeria's neighbouring countries," he said on Sunday during a visit to Azerbaijan's capital Baku.

The leaders of at least five African countries - Nigeria, Chad, Cameroon, Niger and Benin - may take part, a source close to the president said. Nigeria's government has been criticized as slow to respond to the crisis and Amnesty International claimed on Friday that the military had prior warning of the impending abductions.

Abuja has since been forced into action after a groundswell of national and international outrage that has included protest marches across the world.

Jonathan has said he believes the girls are still in Nigeria. Searches were being conducted in the Sambisa forest area of Borno state, where the military has previously found Boko Haram camps and arms caches.

There are fears, however, that the girls may have been moved across the border into Chad and Cameroon.

Meanwhile, a Nigerian girl who fled kidnappers at her school in Chibok told CNN that the terrorist group Boko Haram loaded the girls onto seven trucks.

The reporter, said by CNN to be the first international news correspondent to arrive in the remote village, shielded the girl's identity by keeping her back to the camera. "I feel afraid" to give details, she said.

When the terrorists arrived nearly four weeks ago at her school, one of them said "go and enter this car," one of seven "big" lorries. Instead, she fled by dropping out of sight and running into the bush. "We would rather die than go," she said.

Boko Haram, whose name translates loosely from the Hausa language spoken widely in northern Nigeria as "Western education is sin," has attacked schools, churches, government installations and, increasingly, civilians since 2009.

This year alone more than 1,500 people have been killed, despite a state of emergency imposed in three northeast states in May last year which was designed to put down the insurgency but has failed to stem the bloodshed.

The militants were blamed for another attack on Friday night that completely destroyed the village of Liman Kara in northeastern Adamawa state.
RELATED TOPICS