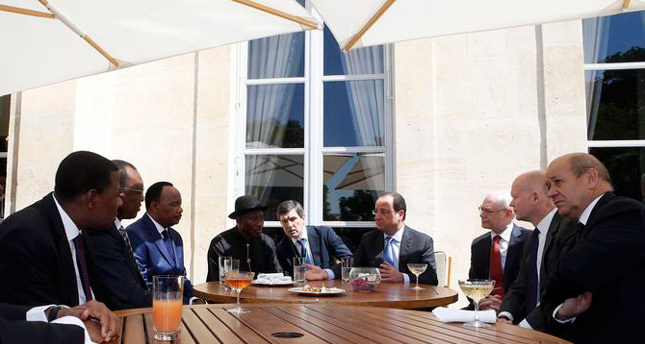 by May 17, 2014 12:00 am
PARIS — Hours after yet another attack in a Boko Haram stronghold, leaders from five African nations gathered in Paris on Saturday for a summit with Western officials in hopes of coordinating actions against the Islamic extremist group holding more than 200 girls captive.

The militants, who claim to be fighting a holy war in Nigeria, move freely across the border into neighboring Cameroon, where a Chinese company's camp came under attack late Friday.

The leaders of Nigeria, Niger, Cameroon, Chad and Benin were meeting Saturday with French, U.S. and British officials in hopes of coordinating strategy and sharing intelligence to find the kidnapped Nigerian schoolgirls.

Boko Haram has offered to exchange the 276 girls who remain captive for jailed insurgents, and threaten otherwise to sell the the girls into slavery.

Officials have said there will be no Western military operation. British officials say Nigerian President Goodluck Jonathan, who has reluctantly accepted outside help, has ruled swapping prisoners for the girls.

On Friday, Jonathan canceled a trip to the town where the girls were seized, apparently due to security concerns.