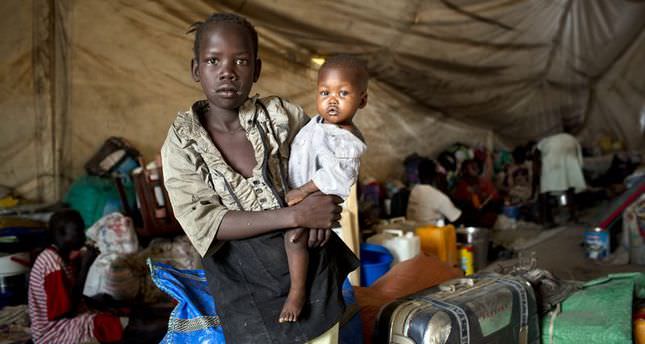 by AA May 20, 2014 12:00 am
ADDIS ABABA — Around 800 South Sudanese refugees cross the border into Ethiopia every day amid reports of fierce fighting in the neighboring Nassir area of South Sudan's Upper Nile State.

"In [the last] 48 hours, since last Saturday, when a new refugee camp – called Kule-2 – was inaugurated, nearly 2000 refugees have crossed the border via Burubeiy," said Godinho.

The new refugee camp is now receiving new arrivals, as the Kule-1 and Leichtour refugee camps are not in a position to receive any more refugees.

Godinho went on to say that the transfer process for refugees from the Kule-1 camp to higher ground was completed just in time – before the onset of the country's main rainy season.

At Kule-1, there are currently 42,000 refugees – the camp's maximum capacity.

"Some of the refugees that were relocated to higher ground from this camp are now sheltered in new and 'permanent' Tukuls [mud huts]," said Godinho.

There are currently five refugee camps in Gambella to accommodate South Sudanese refugees. Two of these, the Okubo and Pugnido camps, cater to refugees that entered Ethiopia during the years of liberation struggle.

Kule-1 and 2, as well as the Leichtour refugee camps, meanwhile, accommodate refugees fleeing the current crisis in South Sudan.
The total number of South Sudanese refugees in Ethiopia is now said to have exceeded 120,000.

Peace talks in Addis Ababa between the South Sudanese rivals came to a standstill once again last Friday over differences between members of a committee tasked with tackling political and security issues, a source close to the Intergovernmental Authority for Development (IGAD), which is mediating the talks, told AA earlier.

South Sudan has been shaken by violence since last December, when President Salva Kiir accused sacked vice-president Riek Machar of leading a failed coup attempt against his regime.

The conflict has already claimed more than 10,000 lives, with the U.N. estimating that around 1 million South Sudanese have been displaced as a result of the violence.

Earlier this month, Kiir and Machar signed a peace deal in Addis Ababa aimed at ending the conflict in the nascent country.