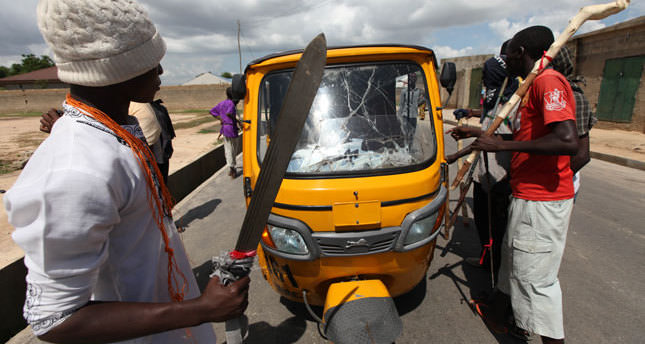 by AA Jun 02, 2014 12:00 am
NIGERIA — Boko Haram militants launched a series of attacks across Nigeria's northeastern Borno State in retaliation for fellow fighters killed in the past raids, killing at least 43 people, according to survivors and police sources.

Suspected Boko Haram militants launched fierce reprisal attacks on villages across Nigeria's northeastern Borno State, killing at least 43 people, according to survivors and police sources. "We buried about 23 people in our village," Kawu Barawu, a survivor of the Kala Balge village attack, told Anadolu Agency on Sunday morning by phone. He said the militants attacked their village between 3 a.m. and 7 a.m. on Saturday. "That death toll could have been higher but for the resistance posed by the vigilantes who lost many of their members," said Barawu. He said the militants were avenging comrades killed during an earlier attack on the village.

Vigilantes had recently subdued and killed several insurgents in a recent Boko Haram raid on the community, drawing nationwide applause including from the presidency and security forces who hailed the valiance of the Kala Balge people.

Abdul Jalal, a member of the local civilian joint task force, confirmed the reprisal attacks."The worst hit was Kala Balge where vigilantes were descended on and killed in their numbers by visibly angry terrorists who said they were on revenge mission," he told Anadolu Agency (AA). "No fewer than 23 people were killed in Kala Balge alone, including villagers," said Jalal. He added that the village was attacked by up to 400 militants armed with different "dangerous weapons well beyond our people's reach."

A police source said at least three other villages in northeastern Borno State were also targeted. "We are told about 20 were killed across the three villages and people have sought refuge with their Cameroonian neighbors," the source told AA, requesting anonymity for not be authorized to talk to the media. "They [militants] completely burnt down these communities claiming to want to avenge their colleagues recently killed or arrested in Kala Balge," added the source.

The villages lie along the border overlooking Cameroon. They often share the same markets with their Cameroonian neighbors and the number of people who escape to the francophone nation underscores the porosity of the border long exploited by Boko Haram.

The group later became violent, however, after the death of its leader in 2009 while in police custody. It has been blamed for numerous attacks-on places of worship and government institutions and thousands of deaths.
Last Update: Jun 02, 2014 2:26 am
RELATED TOPICS