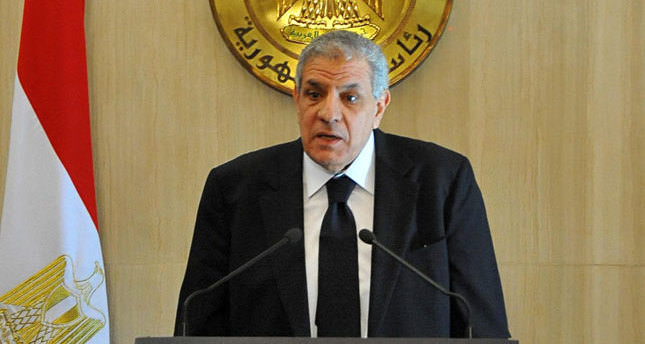 by Jun 09, 2014 12:00 am
CAIRO — Egypt's prime minister Ibrahim Mahlab said President Abdel Fattah al-Sissi, who took charge of office on Monday, had tasked him with forming a new government after the previous cabinet resigned.

Ex-army chief Sissi was sworn in as president on Sunday after winning a lopsided victory in a vote boycotted by the Muslim Brotherhood movement of Mohamed Morsi, the elected president he deposed in July last year.
Interim premier Mahlab said Sissi had on Monday asked him to form a new government but that he had yet began such consultations, state news agency MENA reported.
The previous cabinet installed by Sissi, who has been the de facto leader since he ousted Morsi, resigned Monday to allow the new president to "choose an appropriate one to serve the nation," Mahlab said in an earlier statement.
"I assure you that along with the ministers... I exerted all efforts to accomplish the duties we were tasked with in very difficult circumstances," Mahlab said.
Since Sissi deposed Morsi after millions protested against the Islamist's divisive one year rule, Egypt has been deeply polarised and its economy has nosedived on falling tourist revenues and investments.
At the same time, the government has carried out a brutal crackdown on Morsi's Muslim Brotherhood in which more than 1,400 people have been killed and thousands more jailed.
Soon after his inauguration on Sunday, Sissi, in a warning to the now blacklisted Brotherhood, said there will be "no leniency and truce with those who resort to violence".
"I am looking to a new era built on reconciliation and tolerance.. except with those who committed crimes or used violence as a tool," he said in his first national address as president.
"I am saying clearly that those who shed the blood of the innocent and killed ... the sons of Egypt, they don't have a place in (our) march."
Just hours after his speech, a Cairo court on Monday served one-year jail terms on 112 Morsi supporters for holding unauthorised protests, rioting, blocking roads and assaulting policemen on January 25, when Egypt marked the third anniversary of the 2011 revolt against longtime strongman Hosni Mubarak.
At his inauguration, Western countries, alarmed by the brutal crackdown on dissent, were represented mostly by low-level representatives.
Sisi becomes Egypt's second elected president since the overthrow of Mubarak, which unleashed more than three years of political turmoil.
Last Update: Jun 09, 2014 4:32 pm
RELATED TOPICS