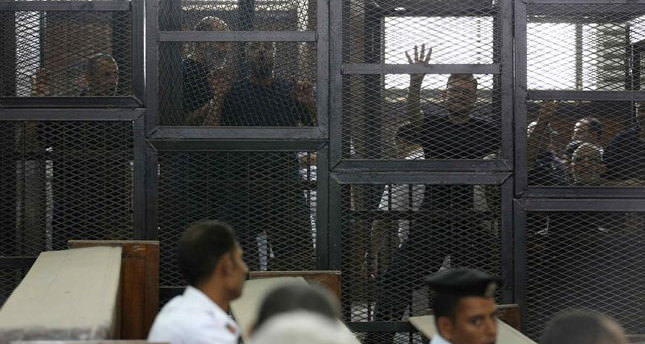 by AA Jun 15, 2014 12:00 am
Egyptian authorities on Sunday moved to raid and close two supermarket chains owned by two leading members of the Muslim Brotherhood, a member of a government-run committee assigned with surveying the group's assets said.

The committee was formed in December last year, days after the government branded the Brotherhood, the movement from which Egypt's ousted president Mohamed Morsi hails, a "terrorist" organization.

Hanna said the committee had taken the decision to raid the two chains after confirming the involvement of their owners in funding the activities of the Muslim Brotherhood.

The Brotherhood and its sympathizers have been staging unrelenting protests and activities against Morsi's ouster for about a year now.
Hundreds of movement members and affiliates were also put in jail under accusations of involvement in violence and rioting.

A daughter of al-Shater, meanwhile, said large numbers of policemen had raided all the branches of her father's supermarket chain, which is called Zad.

"They confiscated all contents of some of the stores and emptied other stores of their goods," Aisha al-Shater told Anadolu Agency.

She added that policemen also raided an administrative building affiliated with her father and detained some of the workers inside. No Interior Ministry official was available for immediate comment.

Ali Kamal, a member of the legal committee of the Muslim Brotherhood movement, criticized the government for emptying some of al-Shater's stores of their goods.

"Confiscation should be done at a legal level, not by damaging the contents inside the stores," Kamal told AA. He added that these stores are only owned by individuals, not by the Muslim Brotherhood as an organization. Al-Shater has been in jail since last July last year under a wide range of charges, including incitement to violence.