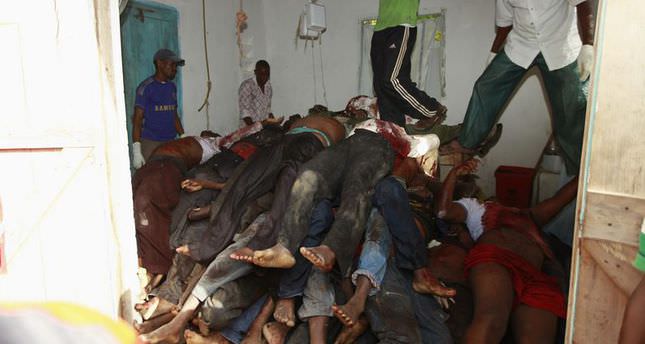 by AA Jun 16, 2014 12:00 am
At least 53 people have been confirmed killed on Monday in attacks by suspected al-Shabaab militants in the coastal town of Mpeketoni in Lamu County near Kenya's border with Somalia.

"I have counted the bodies at the small, unequipped mortuary. It's 53 bodies," John Ngethe, a Kenya Red Cross official told Anadolu Agency.

Suspected al-Shabaab militants had entered the sleepy town at around 8pm, attacking the local police station, looting its armory and spraying residents and police with bullets.

"The attackers entered house-to-house, shooting the men," local resident Ali Lalo Uweso said. "We were locked up in our houses for close to eight hours in fear as gunshots and explosions were heard outside."

The militants also torched three hotels where patrons had come to watch the World Cup.

Residents said the fighting had gone on for at least six hours before the militants finally fled.

Police estimate that some 50 gunmen had been involved in the attack, but that none had been arrested so far.

Interior Minister Joseph Ole Lenku said via Twitter that the assailants had entered the town in two public minibuses.

Police Inspector-General David Kimaiyo said that the death toll had since surpassed the 48 he had earlier confirmed to AA.

"More bodies were found in the nearby forest," he said. "We may be talking about more than 50 dead now."

While no group has claimed responsibility for the attack, the government has pointed the finger at Somali militant group al-Shabaab.

al-Shabaab has in the past claimed responsibility for attacks inside Kenya, threatening to continue targeting the East African country until it withdraws troops – dispatched in 2011 – from Somalia.

Mpeketoni is a mainly Christian town in a predominantly Muslim county.

Two months ago, a grenade was found planted inside a church in the town.