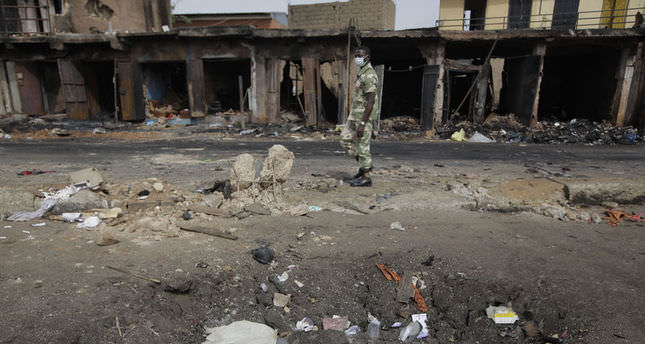 by AA Jun 18, 2014 12:00 am
Several people were feared killed late Tuesday after an explosion rocked a viewing center in Damaturu, the provincial capital of Nigeria's northern Yobe State, residents have said.

"There were over 50 football fans at the viewing center when the bomb went off," Jide Adeoye, an eyewitness, told Anadolu Agency by phone. He said many people may have died.

"There is confusion there now and the JTF (military-led Joint Task Force) have cordoned off the place," Adeoye added.
"I saw them carrying people but I can't really say if they are dead or injured."

Musa Aliyu, another resident, said the explosion occurred at about 9pm local time as a viewing center located at the populated Nainawa ward in Damaturu screened the Brazil-Mexico match in the ongoing World Cup.

Residents could not confirm whether explosive devices were thrown at the viewing center or were planted earlier.
A security source told AA "it is too early to determine" the cause of the explosion.

"The area is still being cordon off," said the source requesting anonymity.

Security agencies are yet to speak officially on the explosion.

Damaturu is located some 120 kilometers from Maiduguri, the provincial capital of Borno State, Boko Haram stronghold.
The city has witnessed few cases of bomb attacks by suspected Boko Haram militants in the past.

On June 12, authorities in the central Plateau State banned all football viewing centers throughout the one-month 2014 World Cup.
The measure came barely 24 hours after a similar decision by authorities in the northern Adamawa state.

At least 14 people were killed when a suicide bomber struck close to a viewing center in Mubi, a town in Adamawa State.