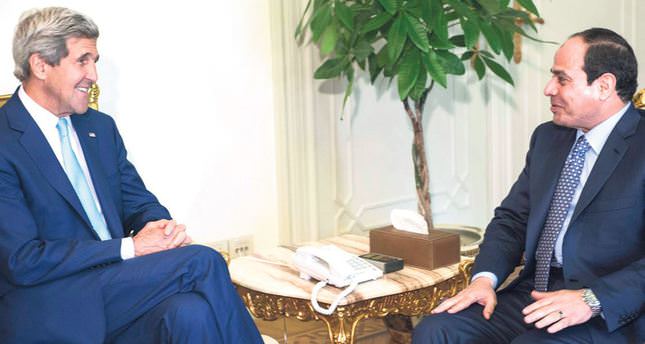 U.S. Secretary of State John Kerry held talks yesterday with President Abdel Fattah el-Sissi in Cairo over concerns about Egypt's crackdown on the Muslim Brotherhood. Kerry is the highest-ranking U.S. official to visit Egypt since Sissi, the former military leader who toppled President Mohammed Morsi after mass protests last year, won a presidential election in May. His visit comes a day after an Egyptian court confirmed death sentences for 183 members of Morsi's Muslim Brotherhood, including its leader Mohamed Badie, in a mass trial on charges of violence in which one policeman
was killed.

The Obama administration has said it looks forward to working with Sissi's government but expressed concerns over widespread human rights abuses and limits on freedom of expression.

Egypt is facing a "critical moment" in its transition to democracy, Kerry said as he arrived in Cairo on a surprise trip. "Obviously this is a critical moment of transition in Egypt, enormous challenges," he said, as he met new Foreign Minister Sameh Shoukri. He was also due to meet President Abdel Fattah el-Sissi and vowed, "The U.S. is very interested in working closely" with the new government "in order to make this transition as rapidly and smoothly as possible."

Meanwhile, an Egyptian court in the central province of Minya on Saturday upheld death sentences for 183 supporters of ousted President Mohamed Morsi, including the top Muslim Brotherhood leader, a judicial source said. "They were convicted of torching a police station and killing a police officer," the source told Anadolu Agency.

The defendants, who included Muslim Brotherhood supreme guide Badie, were convicted of committing violence, attacking two police stations and killing a policeman in Minya in August following the violent dispersal of two pro-Morsi sit-ins in Cairo in which hundreds were killed.

The judicial source said that those condemned to death included a Christian man and a blind one. The court also slapped four people, including two women, with life sentences and acquitted 496 others in the same case, the source said.

On April 28, the same court referred the files of the 183 defendants, along with the files of 500 others, to the grand Mufti, the country's highest religious authority, to seek advice on their possible execution.

Trial judges postponed the trial for almost two hours due to the lack of enough security outside the courthouse where the relatives of the defendants assembled in apprehensive and pessimistic expectation.

Saturday's ruling, which can be appealed, is the second against the supreme guide of the Muslim Brotherhood, the movement from which Morsi hails. Badie was referred to the Mufti on Thursday for a possible death sentence on charges of inviting violence in Giza last summer.

Egyptian authorities have started a massive crackdown against the members and the leaders of the Muslim Brotherhood since Morsi's ouster by the military last July. On Friday, U.S. State Department Spokeswoman Jen Psaki said, "Kerry will travel from June 22-27 to the Middle East and Europe to consult with partners and allies on how we can support security, stability, and the formation of an inclusive government in Iraq, to discuss Middle East security challenges and to attend the NATO Foreign Ministerial."

Kerry will also discuss with el-Sissi a bill proposed in the U.S. Congress to reduce Egypt's annual aid package by $400 million, pending progress on democracy and human rights issues. U.S. President Barack Obama had phoned el-Sissi -- the former army general who led the army last summer to oust elected president Mohamed Morsi -- to congratulate him on winning the late May president election. El-Sissi, who vied against leftist Hamdeen Sabahi, garnered nearly 97 percent of votes, according to figures by the electoral commission.

Egypt's relations with the U.S. deteriorated following Morsi's ouster in which el-Sissi is widely believed to have played a key role. Egypt used to receive an annual $2.1 billion in aid from the U.S. - $1.3 billion in the form of military assistance --since the ratification of the 1979 U.S.-brokered peace treaty between Egypt and Israel.

Last October, however, Washington froze part of the annual aid package, including the sale of Apache gunships and other military equipment, pending the "democratic transition" pledged by Egypt's army-backed interim government in the wake of Morsi's ouster last July.
RELATED TOPICS