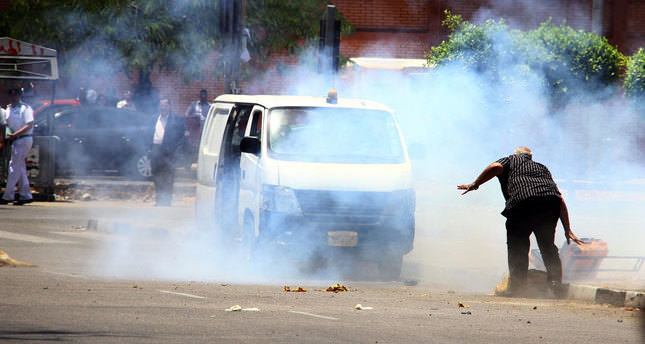 by Associated Press Jun 30, 2014 12:00 am
Three homemade bombs went off near Egypt's presidential palace on Monday, killing two senior police officers and injuring 10 other people on the anniversary of mass protests that led to the ouster of Islamist President Mohammed Morsi.

The devices were planted less than 20 meters (yards) away from the walls of the Ittihadiya palace in the upscale Heliopolis district in eastern Cairo, in what appeared to be a serious security breach in the heavily policed area.

It was not immediately clear whether President Abdel-Fattah el-Sissi, who as army chief ousted Morsi last summer, was inside the palace when the explosions occurred.

Ajnad Misr, or Soldiers of Egypt, said it planted explosives near the palace on June 18 to hit its security contingent. But it said it aborted the attack because civilians came close to the explosives. It said its operatives were unable to retrieve the devices but have been diverting civilians away from them. The statement's claims could not be verified and it was not clear if the assertions were connected to Monday's blasts.

Security officials said the first bomb to go off Monday slightly wounded three street cleaners, while a second and third exploded while bomb squad teams were trying to defuse them, killing a police colonel and a lieutenant-colonel, and wounding seven other people. Another device in the area was discovered and safely defused, according to the officials, who spoke on condition of anonymity because they were not authorized to speak to reporters.

The Interior Ministry confirmed the deaths of the two officers without providing further details.

An Associated Press video showed the immediate aftermath of the second explosion, with plainclothes police carrying away the dead colonel and an injured policeman as a cloud of white smoke rose from the site.

Security forces also sealed off roads leading to the palace, with police dogs used in the search for more explosive devices and special police forces arriving at the scene.

The blasts fell on the anniversary of the start of several days of protests in which millions of Egyptians demanded that Morsi step down. The protests culminated with Morsi's removal by the military on July 3 and subsequent imprisonment. El-Sissi retired from the army and was elected president in May for a four-year term.

On the other side of town, security forces sealed off Tahrir Square epicenter of the 2011 uprising that toppled longtime ruler Hosni Mubarak to search for explosives. The square will be the venue for celebrations later on Monday to mark the anniversary of the anti-Morsi protests.

An opposition alliance led by Morsi's Muslim Brotherhood, meanwhile, called on Monday for nationwide street protests on Thursday to mark the 1st anniversary of his overthrow.

"July 3 will be a day of rage that will be the beginning of the end, or a day of rage that paves the way for a decisive stage," said a statement by the so-called National Alliance for the Defense of Legitimacy. It called on its supporters to march to Tahrir square from 35 mosques in Cairo and pleaded with police and army troops not to confront the protesters.

Past attempts by Morsi supporters to stage mass street protests or march to Tahrir have been harshly dealt with by security forces, part of a government crackdown against the Brotherhood supporters and other Islamists that has over the past year killed hundreds and jailed nearly 2,000 people, including Morsi and most Brotherhood leaders.