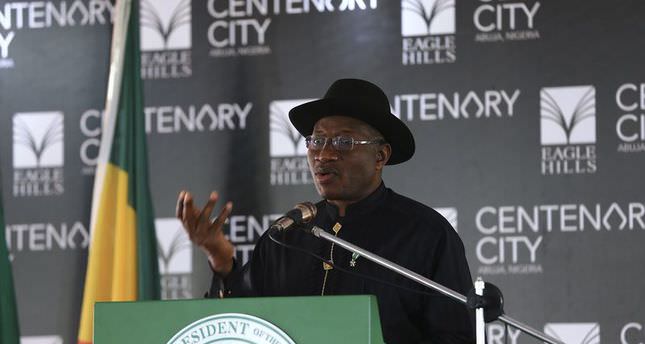 by Jul 17, 2014 12:00 am
Nigerian President Goodluck Jonathan on Wednesday sought approval from parliament to borrow up to $1 billion abroad to help the armed forces tackle the security threat posed by Boko Haram group.

Jonathan, facing intense criticism at home and overseas for his government's failure to curb a spreading campaign of violence by the militants, made the request in a letter read to Nigeria's Senate and House of Representatives.

His government is accused by critics of not doing enough to protect civilians in Africa's biggest economy and oil producer from Boko Haram, which has killed thousands and abducted hundreds since launching an uprising in the northeast in 2009.

Nigeria's parliament was expected to debate the borrowing request at a time when international attention on the Boko Haram insurgency has increased since the abduction by its militants in mid-April of more than 200 schoolgirls. They remain missing.

His request was expected to raise some questions, as Nigeria's 2014 budget already provides for nearly $6 billion in security spending. The government has also faced allegations by a former central bank governor, Lamido Sanusi, that billions of dollars of oil revenues failed to reach the national treasury.

Nigeria's military has started receiving training, advice and intelligence support from allies such as the United States, Britain, France and Israel.

But it is still struggling to counter almost daily raids, frequent kidnaps and targeted bomb attacks by Boko Haram. The shadowy group, whose name means "Western education is sinful", says it wants to set up an Islamic state in Nigeria, whose population is split between Christians and Muslims.

Nigeria's military was once seen as a force for stability across West Africa, but it has suffered over the past two decades from a lack of investment in training, falling morale and failure to maintain equipment.

Authorities and military experts fear the insurgency, which has claimed bomb attacks in recent months in the capital Abuja and in the coastal commercial hub Lagos, is seeking to push its campaign into the more prosperous south.