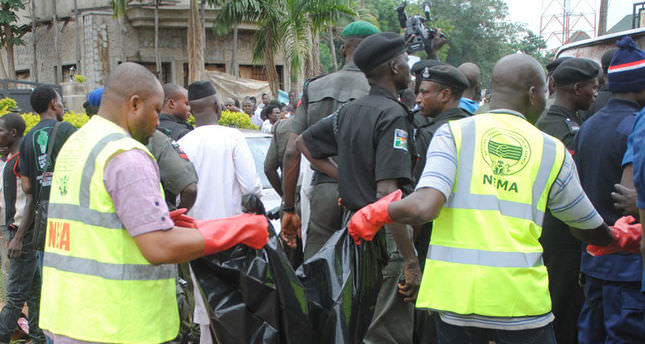 by Jul 23, 2014 12:00 am
At least 82 people were killed on Wednesday in two bombings in the northern Nigerian city of Kaduna targeting opposition leader and former president Muhammadu Buhari at a busy market and a moderate Muslim cleric about to lead a crowd in prayer.
The attacks bore the hallmarks of Islamist group Boko Haram but may also have been linked to politics ahead of 2015's elections.
The deadlier blast targeted Buhari's convoy at the crowded Kawo market, his son told Reuters on the scene. A Red Cross official said at least 50 people were killed there.
Buhari was the main opposition party contender against President Goodluck Jonathan in the 2011 election and remains a key figure in the opposition alliance. He was riding in an armour plated sports utility vehicle and was not wounded.
A crowd gathered at the scene of the incident, until the military dispersed them by firing shots in the air. Smoke rose from another vehicle destroyed in the blast.


There was no immediate claim of responsibility for either blast, but Islamist militant group Boko Haram has been staging attacks, especially with explosives, outside its northeastern heartlands for the past three months.
Buhari and his political team did not immediately react.

Boko Haram leader Abubakar Shekau last week claimed responsibility for two explosions on June 25 at a fuel depot in Lagos, Nigeria's commercial hub, that killed at least two people. A military offensive since May last year that was meant to dismantle their hold on the northeast has caused the militants to react in two ways: brutal attacks on civilians in the region have surged dramatically, and efforts to strike out in areas far from the rebels' strongholds have resumed. A blast in the central city of Jos, 170 km (105 miles) east of Kaduna, killed 118 people in May.