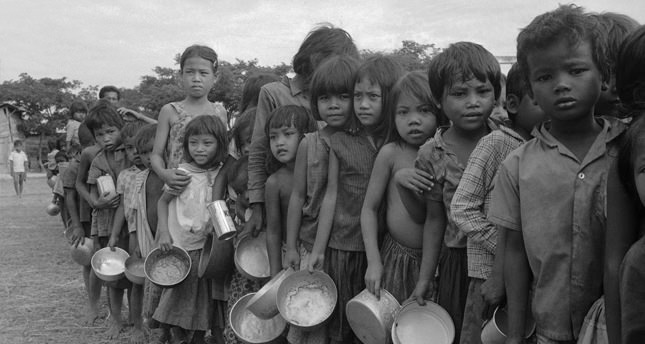 by Associated Press
Aug 08, 2014 12:00 am
Three and a half decades after the fall of Cambodia's Khmer Rouge, a U.N.-backed tribunal on Thursday sentenced two top leaders of the former regime to life in prison for crimes against humanity during the country's 1970s reign of terror that left close to 2 million people dead. The historic verdicts were announced against Khieu Samphan, the regime's 83-year-old former head of state, and Nuon Chea, its 88-year-old chief ideologue the only two surviving leaders of the regime left to stand trial.

The tribunal's chief judge Nil Nonn asked both men to rise for the verdicts but the frail Nuon Chea, wearing dark sunglasses, said he was too weak to stand from his wheelchair and was allowed to remain seated. Nil Nonn said both men were guilty of "extermination encompassing murder, political persecution, and other inhumane acts comprising forced transfer, enforced disappearances and attacks against human dignity."

There was no visible reaction from either of the accused, both of whom have denied wrongdoing. The rulings can be appealed, but Nil Nonn told the court that "given the gravity of the crimes" both would remain in detention.

The case, covering the forced exodus of millions of people from Cambodia's towns and cities and a mass killing, is just part of the Cambodian story.
Nearly a quarter of the population about 1.7 million people died under rule of the Khmer Rouge through a combination starvation, medical neglect, overwork and execution when the group held power in 1975-79.

Survivors of the regime traveled from across the country to witness the historic day, filling several hundred seats available to the public at the tribunal. After the verdict was read, many said they felt mixed reactions and questioned if any punishment could fit the crimes committed by the Khmer Rouge.

Tribunal spokesman Lars Olsen called it "a historic day for both the Cambodian people and the court. The victims have waited 35 years for legal accountability, and now that the tribunal has rendered a judgment, it is a clear milestone."

The current trial began in 2011 with four senior Khmer Rouge leaders; only two remain. Former Foreign Minister Ieng Sary died in 2013, while his wife, Social Affairs Minister Ieng Thirith, was deemed unfit to stand trial due to dementia in 2012. The group's top leader, Pol Pot, died in 1998.
Khieu Samphan has acknowledged that mass killings took place. But testifying before the court in 2011, he claimed he was just a figurehead who had no real authority. He denied ordering any executions himself, calling the allegations a "fairy tale." Instead, he blamed Pol Pot for its extreme policies.

Nuon Chea, who is known as Brother No. 2 for being Pol Pot's trusted deputy, had also denied responsibility. Because of the advanced age and poor health of the defendants, the case against them was divided into separate smaller trials in an effort to render justice before they die.
Last Update: Aug 08, 2014 1:27 am