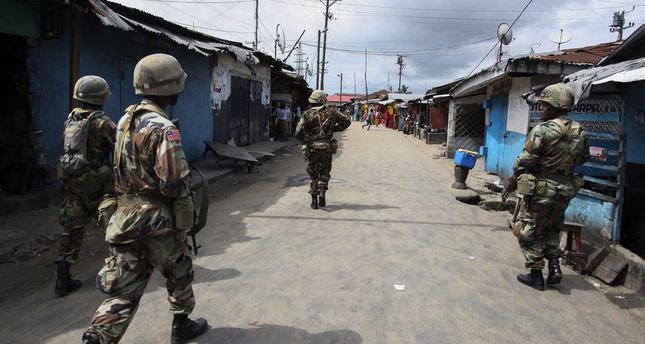 by AA Aug 20, 2014 12:00 am
Liberian President Ellen Johnson Sirleaf has imposed a nighttime curfew throughout the country as part of efforts to battle an outbreak of the deadly Ebola virus in the West African country.

"We have been unable to control the spread due to continued denials, cultural burying practices, disregard for the advice of health workers and disrespect for the warnings by the government," the president said.

"As a result, and due to the large population concentration, the disease has spread widely in Monrovia and [its] environs," she added.

"It has thus become necessary to impose additional sanctions to curb the spread overall, and particularly in those areas of intensity," Sirleaf asserted.

The curfew will take effect as of 9pm Wednesday and will last until 6am each day.

Under the curfew order, all entertainment centers-including video clubs-will close by 6pm daily.

In recent months, Ebola-a contagious disease for which there is no known treatment or cure-has claimed more than one thousand lives in West Africa.

According to the World Health Organization, Liberia had documented 786 laboratory-confirmed, probable and suspected cases of infection as of August 13.

It has also registered 413 laboratory-confirmed, probable and suspected Ebola deaths, including 58 reported on August 12 and 13.

On July 7, President Sirleaf declared a 90-day state of emergency throughout the country due to the outbreak.

She had earlier ordered the immediate closure of all schools throughout the country and put all non-essential staff at government ministries and agencies on 30-day compulsory leave.

It also reportedly spreads through contact with the body fluids of infected persons or of those who have died of the disease.

Meanwhile, two communities that continue to report mass Ebola deaths have been sealed off.

The West Point Township near capital Monrovia, where an Ebola holding center was looted Saturday, and Dolo Town in Margibi County are both being quarantined due to the high level of reported Ebola cases.

State security forces have already set up roadblocks at all the communities' entry and exit points.

"We woke up this morning and saw soldiers in our community; our people are in panic," Geo-Varnie Brooks, a Dolo community leader, told Anadolu Agency.

"The government should have told us and put all measures in place before putting us under quarantine," he fumed.

The restrictions are intended to aid the fight against transmission following reports from some communities of dead bodies being thrown in the streets and people relocating to other counties or crossing into other areas under cover of darkness.

All this, the government believes, has contributed to the rapid spread of the virus.

In recent weeks, the government has warned those from affected counties to remain inside their communities and refrain from relocating in hopes of containing the virus.