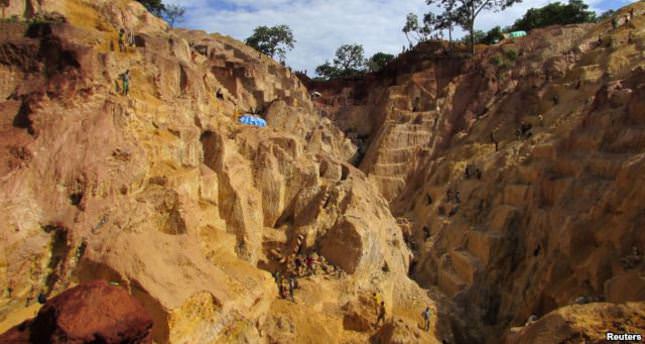 by AA Aug 23, 2014 12:00 am
At least 27 people were killed when a gold mine run by the Seleka militias collapsed on Thursday in Ndassima in the center of the war-torn Central African Republic (CAR), the militia spokesman said Saturday.

"A total of 25 bodies have been extracted from the mine. However, two bodies are still buried beneath," Ahmadinejad Ibrahim told Anadolu Agency.

Ndakossi Ancelme, a trader in Ndassima, told AA by phone that a group of young men entered the mine on Thursday morning to look out for gold.

"As it rained, the land collapsed, causing a tragic landslide," he added, noting that heavy rains are common at this time of the year in the area.

The gold mines in Ndassima were run by Aurafrique, a subsidiary of the Canadian company Axmin, before Seleka rebels managed to take over the site following a 2013 offensive.

Landlocked CAR descended into anarchy last year when Seleka rebels ousted then-president Francois Bozize-a Christian who had come to power in a 2003 coup-and installed Djotodia in his place.

Amid a high wave of sectarian violence, Djotodia, a Muslim, stepped down in January to be replaced by Catherine Samba-Panza, a Christian who had formerly served as mayor of capital Bangui.
Last Update: Aug 24, 2014 10:07 am
RELATED TOPICS