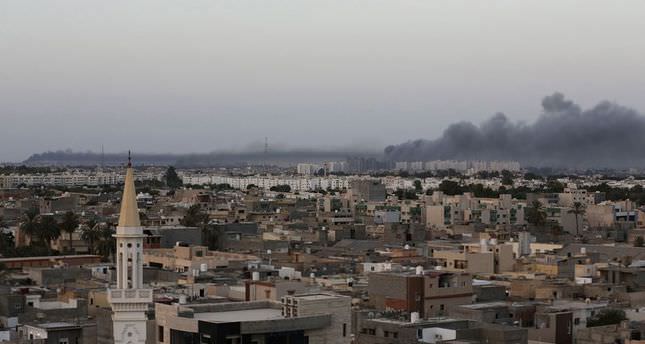 by Aug 27, 2014 12:00 am
Libya warned the U.N. Security Council on Wednesday that the chaotic North African state could descend into full-scale civil war if heavily armed warring factions are not disarmed.

The 15-nation council met to discuss Libya days after its parliament, which was replaced in an election in June, reconvened and chose an Islamist-backed deputy as the new prime minister. That left the country with two rival leaders and assemblies, each backed by armed factions.

"The situation in Libya is complicated," Libya's United Nations Ambassador Ibrahim Dabbashi told the council. "Yet the situation since the 13th of July has become even more complicated and the situation might unravel into a full-blown civil war if we're not very careful and wise in our actions."

On July 13 heavy fighting broke out between rival militias vying for control of Libya's main airport, killing at least seven people and forcing a halt of all flights in the worst fighting in the capital for six months.

An election in June had been aimed at rebuilding state institutions in an attempt to quell three years of spreading violence since the ouster of long-time ruler Muammar Gaddafi.

The recent fighting is part of growing turmoil in the North African oil producer, where the government is unable to control battle-hardened militias that helped to overthrow Gaddafi in 2011 but continue to defy state authority.

"I had always excluded the possibility of civil war but the situation has changed," Dabbashi said.

"In the past, security incidents were limited, isolated and rare," he added. "But today the clashes ... (are) between two armed groups using heavy weaponry. Each group (has) its own allies scattered in the other regions of the country."

He said it was crucial to disarm those groups.

In response to the increasing chaos, the council passed a resolution on Wednesday that tightens the arms embargo on Libya and extends sanctions to groups and individuals that threaten the country's peace and stability.

British Ambassador Mark Lyall Grant, council president this month, told reporters the council would move swiftly to come up with concrete names of those who would face international asset freezes and travel bans.

Libya's government has called for a peacekeeping force to be deployed to help disarm militant groups and restore stability. But council diplomats say the situation is too volatile.

The outgoing U.N. special envoy to Libya, Tarek Mitri, said the situation was of "grave concern."

"The threat from the spread of terrorist groups has become real," he said. "The chaotic security situation and the very limited capacity of the government to counter this threat may well have created a fertile ground for a mounting danger in Libya and beyond."

Dabbashi did not mention mysterious airstrikes against Libyan Islamist militants that U.S. officials had suggested were staged by Egypt and the United Arab Emirates.

Mitri said the air strikes were not helpful. "Any foreign intervention is a violation of sovereignty," he said.