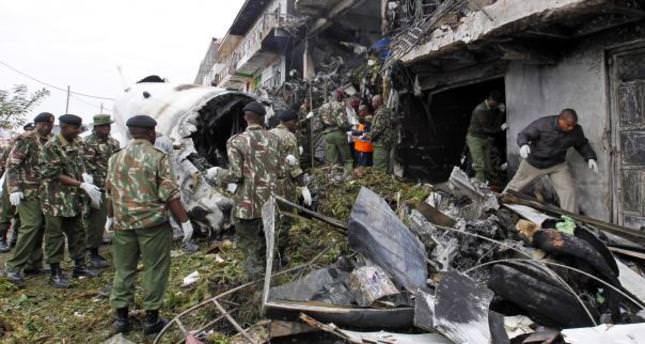 by AA Sep 01, 2014 12:00 am
A Kenyan-owned aircraft has crashed in Tanzania a few kilometers from the Kenya border, leaving three Kenyan passengers burnt beyond recognition.

"Kenyan and Tanzanian authorities managed to locate the crashed plane within the Serengeti National Park not far from our border," Cabinet Secretary for Transport Michael Kamau told Anadolu Agency by phone.

"All three on board were killed in the plane crash," he said. "We hope to get to the bottom of what caused the accident as soon as we can."

The plane, a Fokker F-27 owned by Safari Express Cargo Limited, took off from the Tanzanian town of Mwanza at 7:26pm on Sunday.

It was expected to land at Nairobi's Jomo Kenyatta International Airport, but lost contact with air-traffic controllers in Nairobi and Dar Es Salaam only minutes after takeoff.

"All those on board were crew members of Safari Express and Kenyan nationals," said Kamau.

"We hope to get to the bottom of what caused the accident as soon as we can," he added.

The Transport Ministry has hastened to reassure the public that Kenyan airspace was secure and that Nairobi was working with other East African countries to ensure efficient regional air transport.