US embassy in Tripoli in control of Libyan militias 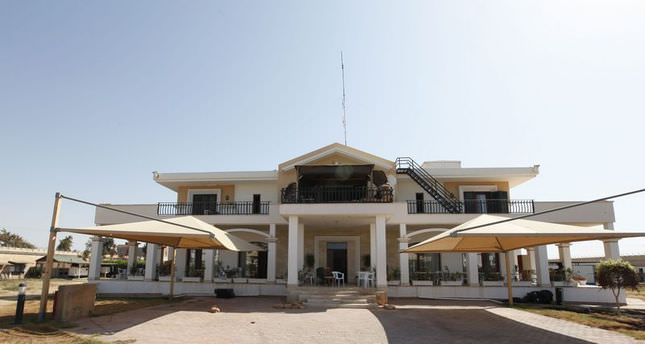 by Daily Sabah Sep 02, 2014 12:00 am
Amid the increasing clashes in recent weeks between militia groups and Libya's army factions in the capital city, Tripoli, the Dawn of Libya militia group reportedly seized the evacuated U.S. embassy residential compound after taking it over from rival militias. "At this point, we believe the embassy compound itself remains secure but we continue to monitor the situation on the ground, which remains very fluid," a senior U.S State Department official said in a statement, while seeking additional reports, according to Deutsch Presse-Agentur (DPA) news agency.

A commander for the Dawn of Libya group, Moussa Abu-Zaqia, told the Associated Press that the U.S. embassy has been in the control of militias since last week, after rival militias took over the compound. According to a report by Dubai-based broadcaster Al-Arabiya, some members of Dawn of Libya were seen inside the embassy compound.

After weeks of heavy fighting between rival militia groups over the control of the capital city and the strategic international airport, the U.S. embassy in Tripoli was shut down in late July. The U.S. evacuated its entire diplomatic staff due to the deteriorating security situation in Tripoli.

As the heavy clashes between rogue brigades have undermined the Libyan interim government's control to restore order, most of ministries' headquarters have reportedly been captured by militants who threaten senior officials and ministers not to enter the occupied government buildings. "The government declares that these premises and institutions are unsafe and it is hard to have access to some of them after they have fallen to gunmen," the interim government said in a statement on Sunday, as DPA news agency reported. "Until state buildings are secured, the government, which submitted its resignation to the House of Representatives, will continue to work from any other Libyan city."

Libyan Prime Minister Abdullah al-Thani and his interim cabinet resigned to make way for the new House of Representatives to form a government based on all parts of society. Libyan government has been in a state of continued turmoil, has long been at the mercy of militias, a the interim government has not had enough power to bring an end to the political turmoil.

A day earlier, six ministers in the interim cabinet had announced their resignation in protest interim government's policies.

Libya has been suffering from a chronic absence of security since the fall of longruling dictator Moammar Gadhafi. Since then, various actors have taken the stage, including the fragile central government, the two main armed militias - Zintanis and Misratans - and the Libyan National Army led by renegade General Khalifa Haftar.

In the absence of political authority and security, two Zintanis and Misratans militias have been fighting to seize control of key installations, especially the international airport in Tripoli. Heavy fighting among rival militias in Tripoli and the eastern city of Benghazi has led many diplomats, thousands of foreign workers and Libyans to flee the country for their lives as the security situation continues to severely deteriorate.