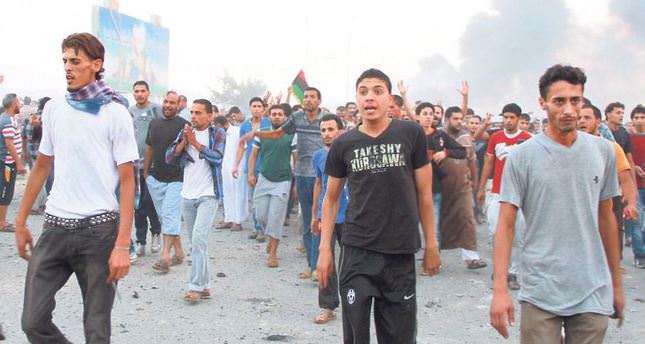 by Daily Sabah Sep 03, 2014 12:00 am
Heavy clashes between rogue brigades have been continuing in the absence of a strong political authority.During the clashes in the western part of the capital city of Tripoli, two Libyan civilians were reportedly killed and three others injured, a security official told Anadolu Agency (AA). "Civilians' homes were caught in the middle of the attack, which took place late Tuesday," Col. Said Mahmoud Ashour, the security chief in Janzur, a city in northwestern Libya where the armed rival militias clashed. He stressed that the city "is an exclusively residential area despite recent reports of [heavy fighting]."

Meanwhile, Libya's parliament is set to endorse a new government with the aim of strengthening the central authority, thereby putting an end to the power struggle between rogue brigades. Following the House of Representatives' demand for the interim Prime Minister Abdullah al-Thinni to form a new government, al-Thinni and his interim cabinet announced its resignation to make way for a new government based on all parts of society, a move that came after six ministers had announced their resignation.

Libya has long been suffering from a chronic absence of security as the heavy clashes threaten to tear the country apart. Various actors have taken the stage, including the fragile central government, the two main armed militias, Zintanis and Misratans, and the Libyan National Army, led by renegade General Khalifa Haftar. None of the actors have been strong enough to put an end to the ongoing turmoil, however.