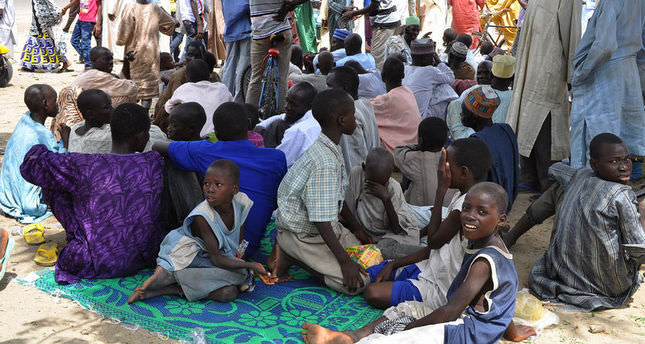 by AA Sep 05, 2014 12:00 am
Children are forcefully being recruited by Nigeria's Boko Haram militants and local vigilantes, a global children's rights group said in a report released on Thursday. "Children as young as 13 are being recruited by both sides of the conflict and have nowhere to turn," Watchlist on Children and Armed Conflict said in its report. "While the abduction of over 200 girls in Chibok, Borno State, has shed some light on how children are affected by the conflict in the northeast, most abuses are still poorly documented, understood and addressed by key actors," it added.

The group said both the militants and the vigilante Civilian Joint Task Force deploy children for "spying and assistance." "The gravity and scale of these violations warrant urgent action from the Nigerian government, the U.N. and other child protection actors," it insisted.

Boko Haram has been accused of, and in many cases claimed, the abduction of people as it wages its campaign of terror across Nigeria's northeast, especially the Borno, Yobe and Adamawa states.

But the claim that local vigilantes also recruit children is entirely new and may prompt investigation into the activities of groups long hailed for partially reining in Boko Haram, according to Anadolu Agency correspondent.

Boko Haram has already overrun the towns of Gamboru Ngala, Dikwa and Gwoza, all in Borno; Buni Yadi and Bara in neighboring Yobe State; and Madagali in Adamawa State.The group is also said to be now in full control of Bama, a town nearly 60km from Maiduguri, the heavily populated provincial capital of Borno state.

Boko Haram's elusive leader, Abubakar Shekau, recently declared all territories under Boko Haram control to be part of an "caliphate" in northern Nigeria.The Nigerian military, for its part, has dismissed Boko Haram's claims, insisting that no part of the country had-or would be-conceded to the militant group.Since May of last year, the three states-Borno, Yobe and Adamawa-have all remained in a state of emergency, imposed by the government with the stated aim of curbing the Boko Haram "menace."

Meanwhile, regarding violent extremism posed by Boko Haram, the U.S.Assistant Secretary of State Linda Thomas-Greenfield asserted on Thursday that Boko Haram and its capture of key towns across Nigeria's northern region pose a threat to the reputation of the Nigerian army and the future of the country. "We are deeply troubled by the apparent capture of Bama and the prospects for an attack on and in Maiduguri which would impose a tremendous toll on the civilian population," Thomas-Greenfield told the U.S.-Nigeria Binational Commission's Regional Security Working Group in Abuja. "All of these developments are deeply disturbing and increasingly dangerous with each passing day," she said. "But more importantly Nigeria's and its children's future is in jeopardy," she added. "Failure is not an option."