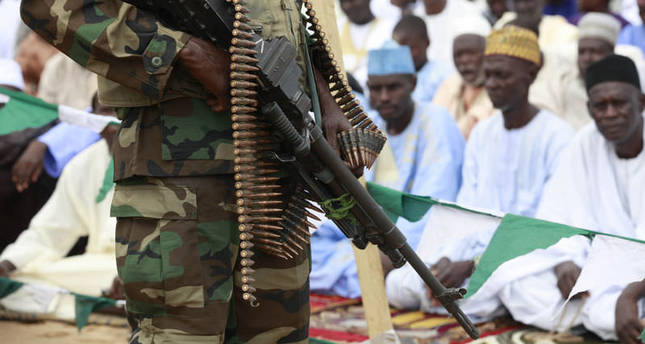 by Sep 12, 2014 12:00 am
Nigeria's military on Friday claimed to have routed Boko Haram militants near the Borno state capital Maiduguri, as residents in another under-siege town complained of food shortages and slavery.

Army spokesman Timothy Antigha said in a statement that the Islamists launched a "massive" attack on the town of Konduga, about 35 kilometres (22 miles) from Maiduguri, at 0430 GMT Friday.

"After about three hours of fierce fighting, Nigerian troops routed the Boko Haram fighting force of over 100 terrorists," he said, adding that the insurgents suffered heavy casualties.

"The entire area is still being combed for terrorists, who may have escaped with bullet wounds. Morale of troops remains very high," Antigha said.

The battle came a day after the Borno Elders Forum called for military reinforcements to protect Maiduguri, warning that the key city was "completely surrounded" by the militants.

There has been mounting concern at the extent of Boko Haram's land grab in Borno and neighbouring Yobe and Adamawa states, which has raised concerns about a possible loss of government control.

Nigeria's military have repeatedly rejected claims about Boko Haram taking over towns and villages, despite multiple testimonies from fleeing residents.

Boko Haram stormed the town of Bama, 70 kilometres by road from Maiduguri, on September 1.

Thousands of people fled to the state capital but there have since been conflicting reports about whether the militants were still in control.

The Bama Development Foundation, a community group, maintained that the town was still "under the custody and control of the dreaded Boko Haram sect" and many residents were still trapped.

The group's leader, Mohammed Hassan, said those trapped in the town were "dying of hunger and stress" and urgent action was needed to reclaim the town.

No military offensive had been launched to reclaim Bama, Hassan said, refuting the government's claim that its troops had recaptured the town.

"The Nigerian security forces are yet to return to Bama after they left on Monday 1st September," he said.

Some locals who escaped said hundreds of women, children and the elderly were trapped and that Boko Haram had appointed their own "emir" or leader at the deserted palace of the traditional chief.

"There is no food in Bama and residents have to go to the palace to beg the emir for grains every few days," Hajjo Muhammad, who escaped to Maiduguri on Wednesday, told reporters.

She said residents were forced to beg for medicine at the palace and some were dying of illness, particularly children. Permission was even required to get water from the river.

"We just live like slaves," said Muhammad, who fled at night through the bush.

Another woman who left the town on Thursday, Maimuna Ali, said a lack of fuel had forced the insurgents, who were flying their black ensign over the town, to patrol Bama on foot.

Residents were able to escape as the insurgents slept, she said.

Decomposing bodies of hundreds of local men who were killed in the fighting littered the streets, young men had been imprisoned and the elderly forced to swear on the Koran not to fight, she added.

"Those that took the oath had their small fingers inked just like the way a voter's finger is inked after casting a vote during elections," said Ali.

Anyone caught by Boko Haram patrols without the ink stain risked imprisonment for two to three days, as well as whipping and being forced to take the oath, she added.