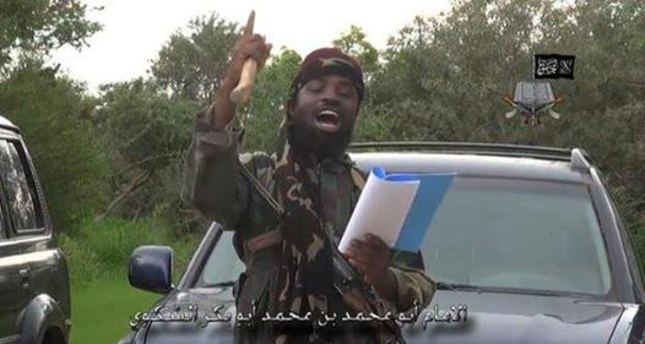 by AA Sep 26, 2014 12:00 am
Nigeria's Information Minister Labaran Maku said Wednesday that his country prefers to see Boko Haram members lay down their arms and embrace peace than celebrating the purported killing of its leader. "The Nigerian government would be happier if the Boko Haram leader and his group laid down their weapons and embraced peace," Maku told reporters following a meeting of the country's federal executive council in Abuja. On Wednesday, the Nigerian military confirmed killing a man described as an impersonator of "deceased" Boko Haram leader Abubakar Shekau during coordinated air and land operations conducted by its troops. Nigeria's secret police have repeatedly said that Shekau had long been killed and that whoever assumes such A name within the group is just an impersonator. But Maku said Nigeria is not willing to celebrate the death of Shekau or his lookalike. "For us, it is immaterial if the leader of the terrorist group is killed or not," he said. "We want them to drop their weapons and embrace peace. We want them to drop their weapons, stop killing their parents and innocent people and accept peace." The information minister said that Nigeria is fighting an asymmetric war in which the enemy is not clearly defined. "This is not a conventional war, but we want all Nigerians to support the government in bringing it to an end as soon as possible," Maku said. "This is a war in which the enemy is living amongst us. They have no specific enemy but all Nigerians have become their enemies, and it does not matter to them whether you are a Muslim or a Christian, with them, no life is safe," he said.

In recent weeks, Boko Haram militants have overrun several towns in Nigeria's restive northeastern region. In a recent video, Shekau – or the man purportedly impersonating him – declared all territories under the group's control to be part of an "Islamic caliphate" in northern Nigeria. Outlawed in Nigeria, Turkey and the U.S., Boko Haram has been blamed for thousands of deaths and scores of violent attacks since the group became violent in 2009. Nigerian authorities on Wednesday announced killing the man they described as an impersonator of "deceased" Boko Haram leader Abubakar Shekau in recent clashes with militants. "Nigerian troops have been conducting coordinated air and land operations in furtherance of efforts at containing the terrorists in the northeast part of the country," Nigeria's defense headquarters said in a statement, to which were attached photographs purportedly showing the slain lookalike. "In the course of these encounters, one Mohammed Bashir – who has been acting or posing in videos as the deceased Abubakar Shekau, the eccentric character known as leader of the group – died," it added. "Since the name Shekau has become a brand name for the terrorist leader, the Nigerian military remains resolute in serving justice to anyone who assumes that designation or title as well as all terrorists that seek to violate the freedom and territory of Nigeria," the army asserted. Defense spokesman Chris Olukolade confirmed the statement. "Yes, the statement is from me," he told Anadolu Agency by phone. "It is a copy of a [news] briefing we are addressing."

For days, the Nigerian authorities had remained tight-lipped regarding reports that Shekau – or the man purportedly impersonating him in videos – had been killed. "We will speak on this issue when we [are] ready," Olukolade told AA late Monday when asked about the reports. The country's secret police apparatus had consistently said that Shekau was killed long ago, insisting that the man who appears in videos was simply a lookalike. Defense headquarters announced on Sunday that several Boko Haram militants had surrendered amid repeated army attacks on their positions. Nigeria.