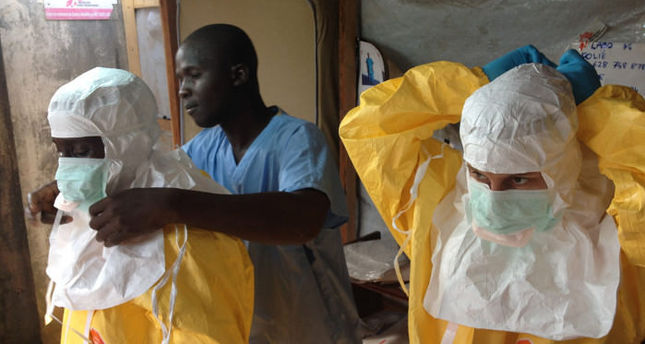 by Sep 29, 2014 12:00 am
Doctors are in short supply. So are beds for patients. Six months into the world's worst-ever Ebola outbreak, and the first to happen in an unprepared West Africa, the gap between what has been sent by other countries and private groups and what is needed is huge. Even as countries try to marshal more resources, those needs threaten to become much greater, and possibly even insurmountable.

Fourteen-year-old D.J. Mulbah was taken by his mother and grandmother on Saturday in desperate pursuit of a coveted bed at the Ebola clinic run by Doctors Without Borders in Monrovia, Liberia's capital. Too weak to stand, he was put into a taxi with his backpack and a bucket for vomit. Now he lay on the dirt beside the worried women. "He has been sick for a week with a runny stomach," said his mother, wiping the sweat off the boy's brow with her bare hands. "We tried calling ambulance days ago but nobody ever came." Beds are filling up as fast as clinics can be built. Ambulance sirens blare through standstill traffic. Often there is nowhere to take the sick except to "holding centers" where they await a bed at an Ebola treatment facility.

By 8 a.m. a dozen people who likely have Ebola are crouching and sitting on the ground outside the padlocked metal gates of a facility with a capacity of 160 patients. Soon a triage nurse approaches, her voice muffled through a surgical mask covered by a plastic face shield. The clinic will take the boy. D.J. manages a faint smile. Seven of the 30 beds made available Saturday morning were vacated by survivors. The rest had died. Statistics reviewed by The Associated Press and interviews with experts and those on the scene of one of the worst health disasters in modern history show how great the needs are and how little the world has done in response. Experts warn that the window of opportunity to snuff out the dreaded disease may close unless promises of assistance immediately become reality.

The existing bed capacity for Ebola patients in Liberia, Sierra Leone and Guinea and Nigeria is about 820, well short of the 2,900 beds that are currently needed, according to the World Health Organization. Recently 737 beds were pledged by countries. Yet even after the promised treatment facilities are built, they will still be at least 2,100 beds short. The shortage of health workers is also great. WHO has estimated that 1,000 to 2,000 international health workers are needed in West Africa. More than local 200 health workers have died of Ebola trying to save patients, complicating recruitment efforts. Doctors Without Borders, which has more Ebola clinics than anyone, currently has 248 foreign aid workers in the region.

U.S. President Barack Obama has ordered up to 3,000 U.S. military personnel to West Africa to train health workers and build more than a dozen 100-bed field hospitals, including reserved sections for infected aid workers in Liberia. Among other promises of global assistance: The African Union has said it will deploy 100 health workers to assist the West African countries affected by Ebola. The first batch of an AU Ebola taskforce, totaling 30 people, left for Liberia on Sept. 18. Taskforce members are expected to arrive in Sierra Leone on Oct. 5 and in Guinea by the end of October.